The electric GIANT G2200E X-TRA offers low-noise and emissions operations, which has benefited use in the city center of Silkeborg, Denmark. 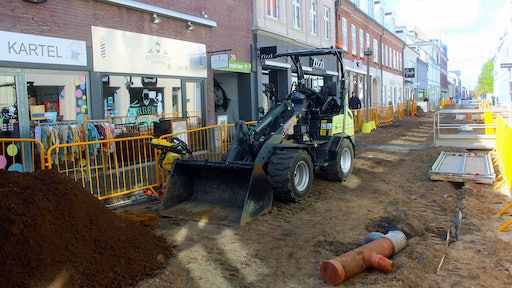 In June,  the new electric GIANT G2200E X-TRA proved in Silkeborg, Denmark, that it is a very good choice for heavy lifting tasks. It has been working for Buus Landscaping, a company with a remarkable green profile, when roadwork in “Denmark’s Greenest pedestrian street” in the city center of Silkeborg had to be carried out. The GIANT has demonstrated its ability for transporting and lifting tasks in the limited urban space of the pedestrian street - without disturbing people working and living in the city center with noise or emissions.

Since entering the market, quite a few of the new electric GIANT wheel loaders of the G2200E-series have been imported by the Danish importer Brdr. Holst Sorensen A/S, and passed on with the help of the 34 Danish dealers to the customers. Among them Buus Landscaping, who is already well represented in electric-powered machinery and received his G2200E X-TRA by his dealer Lyngfeldt A/S.

The company chose the X-TRA-version which is developed for extra hard work, especially in the contractor and construction sector. The G2200E X-TRA has a lifting height of 2.45 m and a lifting capacity of 2,200 kg - its own weight. The machine is equipped with a 48V lithium-ion battery with 250 Ah, located where the engine traditionally is placed on a GIANT loader. It is equipped with a built-in charger of 40 Amps which can be connected to a 230V power supply. The wheel loader has two separate electrical motors, one with 6.5 kW for operating the machine, and the second one with 11.5 kW for the hydraulics.

The electric GIANT loader combines two important elements with the advantage of being an articulated loader. Low-noise operation and zero CO2-emissions. These two elements are advantageous for loading tasks especially indoors or in urban spaces. These are important for Buus Landscaping when they, among other locations, work in a pedestrian zone in Silkeborg.

Buus Landscaping and its green profile

The company already rides the green wave for a while and is known for focusing on climate and environmentally friendly machines. As some of the first companies in Denmark, it has now invested in an electrical GIANT loader. The company already owns six electrically driven cars which contribute to the use of green energy. They also have solar panels mounted on the roofs, supplying power to most of the craftsmen's hand tools. In addition to owning an electric Giant loader, Buus is also looking into electric excavators.

Michael Niemann, Sales Manager and Head of Department at Buus Landscaping explains his point of view: “Years ago, we wanted to sharpen our green profile. We asked ourselves where to start, so the electrical way came clear to us. We started off small with our battery and diesel-powered machines. Today all of the hand machines are electrically driven and we are also switching several of our larger construction machines to electric versions.”

Advantages of the electric GIANT on the building site

The company has been building "Denmark's Greenest pedestrian street" in Silkeborg with the help of the G2000E X-TRA which grants a lot of benefits: The use of the electric machine avoids that passers-by on the pedestrian street are exposed to diesel exhaust. The machine is also equipped with the right LED traffic light and LED backlight so people around the machine can see in which direction the machine is moving, which increases safety on the building site. Also important is the absence of a running diesel engine creating pollution in noise and emissions when working close to the apartments and shops. Without any disturbances of the surroundings the working day for Buus can start earlier in the morning.

Michael Niemann points out: “We see a big financial gain from owning electric machinery. Also, the working environment for the employees is very important. As a company we make both the demands: We like to have for a healthy working environment , but at the same time we like to meet the demands from our employees. They appreciate the benefit of not having to work close to noisy machines and unclean air. On a hot summer day with no wind on the construction site, it is unbearable to work next to a diesel-powered construction machine. That's also an important reason why we have chosen the electric GIANT mini loader.”

When Buus uses their G2200E X-TRA with 250 Ampere battery for normal work, there is enough power available for a full day. If the tasks require a lot of continuous lifting or driving over longer distances, the loader is charged additionally during breaks. According to an internal agreement within the Buus company the last man to use the machine is also the one who connects it to the charger. Like that it is always charged overnight and able to work again the entire following day.

The additional investment in electric machinery is paid back in low maintenance costs on the machine. In addition, it is not only the individual on the street who sees the positive aspects in electricity, the employees do so too. If Buus wants to remain attractive as an employer, the company has to take the choice of a green transition. Also, the addition of an electric GIANT loader with Buus, the Landscaping company contributes to the country's long-term climate target of a 70% CO2 -reduction by the year 2030.

For Buus the only impediment at the moment is that the range of electric machines isn’t yet wide enough. Therefore, they’re closely following the development of electric-powered machinery and continue to work on their green profile.