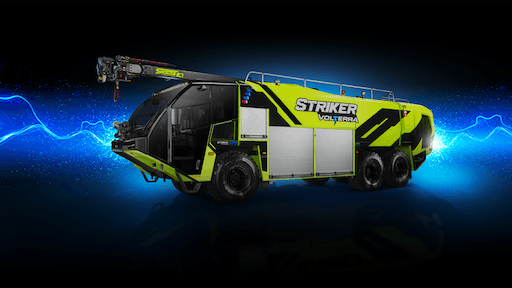 Oshkosh Corporation Fire & Emergency segment, including Oshkosh Airport Products, Pierce Manufacturing, and Frontline Communications, announces it has introduced the Volterra platform of electric vehicles for the fire and emergency market.

“Category leading innovations, grounded with direct input from our customers, is a hallmark of each of the brands in the Oshkosh Fire & Emergency Segment. It’s all about serving the needs of first responders,” said Jim Johnson, Oshkosh Corporation executive vice president and president of Fire & Emergency. “Our electric vehicles designed around Oshkosh proprietary and patented technology will provide the environmental benefits fire departments request, without having to compromise on the leading-edge operational performance, functionality, safety attributes, customization, and the traditional configurations and styling customers expect from our fire apparatus.”

Based on Oshkosh proprietary technology, the new Striker Volterra performance Aircraft Rescue and Fire Fighting (ARFF) hybrid electric vehicle (HEV) has been developed to meet the growing emergency response and environmentally-conscious needs among airports of all sizes.

Additional features of the vehicle include:

Custom-engineered and extensively tested to deliver rapid response while simultaneously reducing its carbon footprint, the new Striker Volterra performance hybrid is fully compliant to NFPA 414 and ICAO standards while being certified to off-highway EPA and EU regulations.

During the next several months, the Striker Volterra performance hybrid will be showcased at airports across the United States, giving firefighters the opportunity to experience first-hand the revolutionary Volterra technology.

In addition to Oshkosh Airport Products introduction of the Striker Volterra hybrid electric vehicle, Pierce has placed its first Volterra zero-emissions pumper in service with the City of Madison, WI, Fire Department’s Station 8, making it the first electric fire truck in service in North America.

In partnership with the City of Madison Fire Department, Pierce will continue the final development, evaluation, and on-highway certification process for the Pierce Volterra electric vehicle.

“Oshkosh has been developing electric drives and vehicles for over 25 years, which will continue to be a critical part of our Fire & Emergency Segment’s vision for a more sustainable future,” said Johnson. “Our Volterra platform of electric vehicles reduces emissions, supports lowering total cost of ownership, and increases performance for first responders. We look forward to introducing the vehicles to fire departments around the world and will closely monitor operator feedback and opportunities for further vehicle enhancements.”