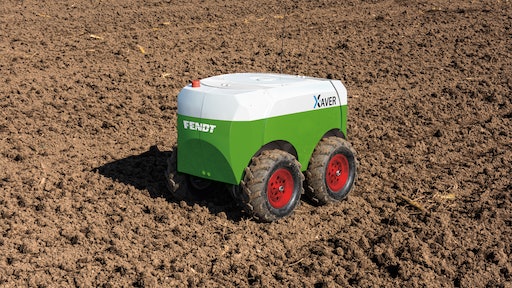 Three years ago, AGCO/Fendt launched the MARS project (Mobile Agricultural Robot Swarms). The concept idea was initially examined in a research project funded by the EU. This project has developed a robot system for high-precision planting, which has now been tested in the field.

After collaborating with the Ulm University of Applied Sciences and the EU research promotion body to successfully complete the multi-year MARS research project, AGCO and Fendt decided to develop the robot project all the way up to the production stage under the banner of the Fendt brand. Featuring swarming robot units and cloud-based system controls, the entire system will now be operated under the product name ‘XAVER’. ‘Xaver’ is a traditional Bavarian name that has deep roots at Fendt. In the 1930’s, brothers Hermann and Xaver Fendt founded ‘Maschinen- und Schlepperfabrik Xaver Fendt & Co.’, which was named after their grandfather Xaver Fendt. When it comes to the new robots, the product name ‘Xaver’ represents a balanced fusion of tradition and the latest farming technology.

Xaver uses small robots operating in swarms and a cloud-based solution to plan, monitor and accurately document precise planting of corn. Satellite navigation and data management in the cloud allows operations to be conducted round the clock, with permanent access to all data. The position and planting time of each seed is accurately recorded. Knowing exactly where the seed has been planted opens up new potential for the rest of the process, since subsequent operations over the plant cycle, such as protecting or fertilizing plants, can be performed precisely according to the individual plant.

Planning for the required field, for seeds, seed patterns and density is carried out via the Xaver app. The intelligent OptiVisor algorithm plans the robot’s deployment based on the entered parameters, and calculates the optimal paths for the units involved and the time required for completion of the job.

Software updates for the system can be loaded “over the air”, just as a remote diagnostic can be run conveniently and in any location via the smart device.

A key element of the Xaver project is intelligent management of the deployed robots. A Xaver system consists of some 6–12 units and can therefore cover around 1 ha/h. Each robot is in constant communication with the controller. Data buffering and redundant communication helps cover breaks in network coverage.

If a robot fails, the paths of all units are automatically re-optimised, and the remaining robots take over. You can also plant a mixed crop in the field, since each robot can be filled with different seeds.

Thanks to the battery-operated, electrical motor (approximately 400 W), the low weight (approximately 50 kg), and the autonomous operation, planting can continue round the clock, 7 days a week, even in conditions which conventional machines find difficult, e.g. due to the state of the ground or noise emissions. This increases the productivity and flexibility of the system. In relation to the large tires, the ground pressure is almost negligible (approximately 200 g/cm²).

The robots need around 70% less energy to do the same work, and accordingly produce less CO2 when doing it. Since neither diesel nor oil is required to operate the robots, there is no leakage and there are no local emissions.

The robots are easy to mechanically assemble, do not use complex sensors, and are therefore highly robust. Their small size and light weight makes maintenance easier, and means that the system is intrinsically safe.

The latest version of the Xaver robots were unveiled to the public for the first time at Agritechnica 2017, the primary target audience being service providers in regions concentrating on ambitious projects, and innovative operations focusing on precision farming.

Promising enquiries have already been received from Germany, Australia, United Kingdom, Switzerland, Netherlands and Africa. Interested parties will have the opportunity to acquire one of the first systems. All customers are individually assessed and will first receive a business and location-specific consultation to see whether the Xaver system is right for them.