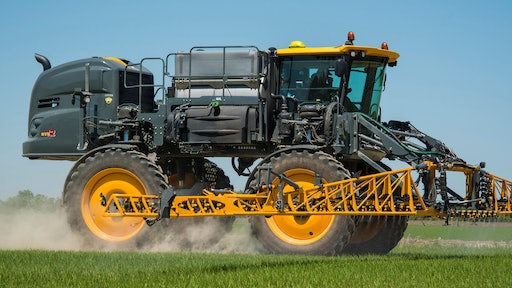 Hagie Manufacturing and John Deere announce changes to model year 2019 Hagie sprayers that will improve performance and functionality in the field for producers and ag service providers.

Continuing the engine change that started this year on the largest Hagie STS Sprayers, MY19 Hagie STS10 and STS12 machines will be powered by 6.8L PowerTech John Deere diesel engines, providing 280 and 300 horsepower respectively. These turbocharged, air-to-air aspirated engines, which are used in the John Deere R4030 Sprayers and a number of other Deere machines, deliver consistent power over a wide range of speeds and terrain. Along with the engines, Hagie is including a new high-performance cooling package that improves fuel efficiency and overall performance of the STS10 and STS12 models.

In addition, the engine compartment and hood on the STS10 and STS12 have been redesigned to accommodate the new Deere engines and incorporates a new tool box and air intake scoop. Customers will also notice the right side of the chassis has been changed to include new fuel and diesel-exhaust fluid (DEF) tanks and a fuel-fill ladder and platform for more convenient machine access.

“Commonality of engines across all John Deere and Hagie Sprayer platforms makes sense from a customer service perspective, making it easier and convenient for customers to get their sprayers serviced by their local John Deere dealers, no matter which brand they own,” Felter says.

Along with the engine and chassis changes, the company is expanding its Dual Product System (DPS) that has been offered through Hagie Custom Solutions. DPS allows the tank to be divided so that two different products can be applied in a single pass. The Hagie DPS is available for 1,200- and 1,600-gal. (4542 L and 6057 L) capacity Hagie Sprayers, giving operators the ability to accurately and variably place nutrients in the root zone while simultaneously broadcast applying crop protection products to the plant.

“The Dual Product System is perfect for late-season applications of nitrogen and fungicides or insecticides to corn, for example,” Felter explains. “This makes the Hagie DPS the most versatile application system for nurturing and protecting crops from emergence to harvest in a single trip across the field. DPS-equipped machines save time, fuel and damage to crops by reducing the number of passes, and has become more popular with many customers in recent years.” The Hagie Dual Product System is available on STS12 and STS16 machines with split-tank configurations equipped with dual pumps and separate rate controllers. It is compatible with Raven or John Deere Precision Ag systems and other plumbing modifications are necessary.