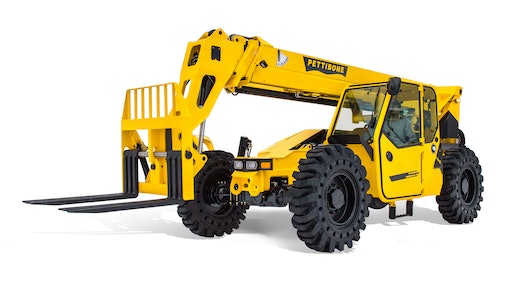 During World of Concrete 2018, Pettibone/Traverse Lift LLC introduced its new Traverse T944X. The telehandler features an extendable, traversing boom that moves loads by traveling horizontally up to 70 in. (1.78 m).

The T944X lifts 9,000 lbs. (4,082.3 kg) and has a lift height of 44 ft. 6 in. (13.6 m). Pettibone chose this size class for the relaunch of its Traverse unit not only because of its experience designing other 9,000-lb. machines but also the telehandler’s ability to compete with those in a larger, taller size class. Kyle Rubin, Director of Sales & Marketing at Pettibone, said during a launch event for the machine that the traversing capability enables the machine to both lift and land a load at 44 ft., whereas a traditional machine actually loses about 3 ft. (0.9 m) of landing height. “That’s something that’s unique to this unit, makes it a little safer and much more versatile,” he said.

Unlike a traditional fixed boom telehandler, the tower portion to which the boom is attached slides forward on a Traverse unit. The traversing carriage is mounted to the chassis with a series of slide pads and pulled forward with a hydraulic cylinder, explains Bob Mayo, Product Manager at Pettibone. Operation is controlled via a joystick in the cab compartment and is fully proportional—meaning the carriage motion can be slow and precise, or operated at a maximum rate of speed.

The traversing capability increases safety because an operator can simply place a load on a target landing, release the contact of the forks and traverse the carriage rearward to disengage the forks. Whereas with a traditional fixed boom pivot telehandler, the operator needs to coordinate several motions of the controls to withdraw the forks from the payload, leading to intermittent contact with the load or the landing. This can cause safety issues on the work site if there are other workers in the landing area. “Landing loads at 40 ft. is not only difficult to see, but coordinating the boom movements can be very ‘touchy,’” says Mayo. “This is where the traversing feature provides the added safety and control.”

Rubin said that thousands of hours of engineering work went into refining the machine to provide modern enhancements while maintaining the durability and performance aspects customers had come to expect from Pettibone. The look of the machine was modernized, and sightlines improved. Rubin said sightlines are either as good or better than customers are used to in current machines. “Each and every part was meticulously analyzed, [and] thought of from a service [and] reliability standpoint,” he said. “Thousands and thousands of hours were put into thinking about what the customer would need and want from every aspect of the market.”

Mayo says serviceability, line of sight and ground clearance were the three main aspects on which customers wanted the company to focus its design efforts when incorporating a side pod engine.

The machine is available with either a 74 or 117 hp (55.2 or 87.2 kW) Cummins Inc. 3.8 L Tier 4 Final engine. Mayo says the key difference is the 74 hp engine does not require the use of diesel exhaust fluid (DEF) and has an aftertreatment system that is slightly easier to route, reducing installation complexity. Pettibone is offering the 117 hp engine option for those customers whose application requirements may call for more horsepower. While the 117 hp engine does require the use of DEF and adds some installation complexity due to the aftertreatment system, Pettibone wanted to provide customers with engine options that would fit their various performance needs.

For the drivetrain, Pettibone carried forward the same design it’s used in the past consisting of a Dana Inc. 212 Series high steer axle. Mayo says it is offered with a limited slip differential on the front axle, and the rear is a standard differential axle. With this drivetrain configuration, and Pettibone narrowing its main chassis, the telehandler is capable of tight steer angles, improving maneuverability. The narrowing of the chassis also enabled the side pod configuration of the engine while still keeping the overall machine width within the 102 in. (2.6 m) shipping requirement.

A three-speed Dana powershift transmission allows operators to change gears without having to press a clutch or stop the machine. Mayo says it’s a fully modulated transmission, as well, allowing the user to shift from forward to reverse while driving at a slow speed, eliminating the need to come to a complete stop in order to do so. He said the drivetrain helps create a more efficient machine due to its maneuverability and ease of operation.

Several changes were made to the telehandler’s telescoping boom, first of which was going from a four-plate box type weldment to a two-plate design formed and welded down the center axis of the boom. Mayo explains the four-plate boom traditionally requires more setup and welding. With the two-plate design the company was able to use a thinner material, helping Pettibone achieve its goal of reducing the weight of its overall boom assembly. Use of two formed plates with a taller cross section not only created a lighter boom but a stronger one, as well. In regards to the machine's weight, he said it was reduced 10-15% compared to the legacy series machine, with a total of 4,500 lbs. (2,041.2 kg) taken out. “That allows two of these machines to be shipped on a single trailer,” reducing operational costs for customers that may need to move between multiple job sites.

Another big enhancement was in regards to the boom overlap—the amount of boom remaining within each telescopic section when the boom is fully extended—doubling it from the previous model. Mayo says this creates less boom deflection as the boom extends out while landing a load, providing the operator with more precise load placement. It also helps reduce contact on the wear pads, extending their service life. A patent-pending fastener-less wear pad design makes for quick and easy maintenance accessibility when necessary.

The boom-mounted extend cylinder was moved to the bottom side of the boom assembly, whereas in previous models it was somewhat buried within the boom section, says Mayo. This reduces loading on the wear pads by up to 50%, further helping to increase their service life. Positioning the cylinder in this location also eases maintenance. When the rear cover of the boom is opened, it is wide open inside, making it easier to access the various hoses and hydraulic lines routed inside the boom.

Mayo says Pettibone is known in the industry for the performance of its hydraulics system, particularly in terms of the fine controllability it provides to ease placement of fragile loads, as well as its efficiency and cycle speeds. The system is pressure compensated without load sense, allowing instant feedback from the slightest movement of the controller. In addition, Pettibone offers fully proportional control on all hydraulic functions, giving the operator precise positioning, as well as the ability to have very slow and fast speed control. Because of these attributes, Pettibone wanted to ensure it kept them while also making some refinements.

Another update Pettibone made was to go from two lift cylinders to a single lift cylinder. Doing so improves line of sight for operators by reducing the number of components it requires, and therefore possible obstructions. The lift cylinder exchanges oil with the tilt cylinder, eliminating the need for a separate compensation cylinder for self-leveling of the boom’s fork carriage. “That provides some advantages—[fewer] components, less complexity—as well as [alleviates] some inherent issues with running in cold weather with a compensation cylinder, as oil tends to not want to flow out of the cylinder very quickly,” explains Mayo. By exchanging oil between the working cylinders, the functions can operate at full speed in cold weather.

Product performance was also enhanced by moving deflection and stress into the boom and tower structure as opposed to the previous dual cylinder design taking these loads.

For the telehandler’s new cab, it was built around the company’s legacy design as customers had said the layout of the operator environment was already successful. It now features an all-steel interior to ensure durability on rough job sites, and wash-down resistant gauges, switches and controls.

Mayo says several areas of the machine design were considered when it came to improving operator visibility. “Utilizing 3D CAD software, along with the upper and lower percentile of operator size and height, we could take a virtual look at sight lines from the operator’s point of view,” he says. “This allowed us to position the height of the seat and cab with respect to the chassis and boom structures.”

Changing the mounting style of the chassis sway cylinder, he says, allowed for less structure toward the front corner and thus a better sightline. In addition, the cab was moved forward to improve visibility to the fork carriage and fork tines. The side pod engine configuration is beneficial, as well, due to its use of tapered covers and having the exhaust system routed within the engine bay assembly, improving rearward visibility.

Rubin said a few features that had once been options have been standardized on the telehandler, and new options have been added that were not previously available. A premium 7 in. (17.8 cm) display, for instance, is now an available option, offering customers a larger display and the ability to integrate a backup camera. As an OEM, he said the display enables the integration of charts and manuals, among many other items.

The operator cab is available either open or enclosed. A big change the company made, Rubin said, is making it easy to enclose the cab should a customer choose to do so later on. Enclosing the cab consists of attaching flat glass with some clips, which an end user can do on his or her own within about 45 minutes.

“[We’re] standardizing things the market demands, but [making it] very simple to upfit or downfit things the customer might want,” he concluded.