A new swing loader concept overcomes stability and space constraint issues to increase productivity and safety on the job site. 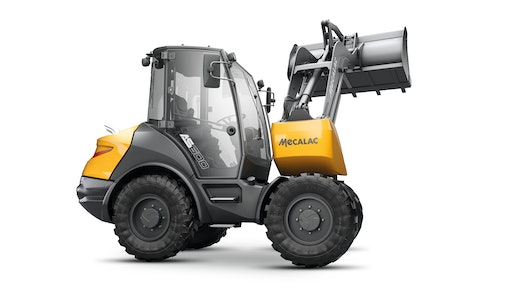 At bauma 2019, Mecalac launched its AS 600 Swing loader designed to pivot without being repositioned to reduce wasted time and increase visibility. The machine is capable of driving, maneuvering and pivoting simultaneously.

Development of the loader was initiated by the need to transition to EU Stage V emissions; the company decided to use this as an opportunity to develop a completely new machine. It chose the swing loader concept because it is more efficient and productive than traditional articulated loaders, says Benoit Feneon, Product Marketing Manager at Mecalac. This is because the AS 600 is able to reduce the number of maneuvers needed to complete a task, saving time and fuel.

Swing is mainly about space management, he says. As an example, if filling a trench along a roadway with an articulated loader, two lanes of traffic will need to be closed in order to provide enough space for the loader to move around to complete its task. The machine will have to make several forward and backward maneuvers when loading and unloading material.

However, when completing the same task with a swing loader, only a single lane of traffic needs to be closed. This is because material can be loaded at the front, and as the machine moves forward or backward, the boom can be swung to either side of the machine and move while the boom is at the machine’s side, eliminating the need for extra maneuvering.

By reducing the amount of maneuvers the machine has to make, the amount of time needed to complete a task can also be reduced as well as the amount of fuel consumed by the machine. In addition, ground compaction is minimized as the loader is not driving over the same area multiple times.

How the machine works

Feneon says one of the issues with articulated loaders is the loss of stability when steering the machine. “Depending on the machine, you lose 25-30% stability,” he says. This is because when turning, the machine’s center of gravity moves to the outside of the machine which makes it unstable.

To overcome this issue, the AS 600 utilizes a rigid frame and four-wheel steering in combination with the swivel arm. This enables the center of gravity to remain in the center of the machine.

To swing the loader’s swivel arm, two hydraulic cylinders connected with a large chain are utilized. “With our system, it’s always at tension,” says Feneon. This ensures the system is always safe and precise with its movements.

Sensors integrated into the machine detect the angle at which it is turning. When the loader’s swing arm is turned more than 30 degrees, pressure from the boom hydraulic cylinders is used to lock the rear axle. Once locked, the swing arm can turn up to 180 degrees without fear of losing stability.

Three steering modes are available on the AS 600—two-wheel steering, four-wheel steering and crab—to ensure maneuverability on any terrain. When the four-wheel steering is combined with the 180-degree swivel arm, a tighter turning radius can be achieved on a footprint that is 20% smaller than that of a conventional loader. Feneon says that manufacturers often mention the turning radius on the wheels of a machine, but they forget about the bucket which is outside that radius when turning. “But this is the most important because on the worksite the bucket may encounter obstacles,” he explains. “When you swing your arm to keep within the turning radius [as with the AS 600] you don’t have this issue at all.”

Other new features of the loader include a spring loaded brake, new operator cab and an engine with 20% more power; in total the engine provides 36 kW (48.3 hp) of power.

In addition, the ergonomics of the machine have been improved. For instance, a left foot pedal was incorporated for controlling the swing arm. Drivers simply have to press it in the direction they want the arm to go. Philipp Schwartz, Product Manager for Loaders at Mecalac, says this is easier for drivers than incorporating the swing arm’s operation into the joystick controls because the movements that would be required are “an unnatural behavior for your hand and it’s not healthy.”

Visibility was a key aspect when designing the machine. “For drivers of the swing loader, it’s important they can always look to the left and the right,” says Schwartz. Because of this the company designed the cab so operators are able to see the left and right sides of the machine, as well as down to the ground and any materials being carried by the machine. It did so by integrating more glass into the cab structure.

The steering column was made smaller to help improve visibility, as well. Doing so makes it easier for operators to see out the front of the machine to keep the attachments and job site within view.

Feneon says that while you can drive with cameras, it’s still important for operators to see with their own eyes the work they are doing, which is why Mecalac’s cabs are designed to maximize visibility.

The AS 600 is part of a full portfolio of swing loaders that includes a total of six machines, from 4-15 tons, to provide customers with machine options that will best fit their needs. The company sees the swing concept benefitting several applications besides construction including snow removal and agriculture.

“We believe we can develop strength [with this product] all around the world because cities are growing and there is less space, and these machines solve a lot of issues customers have on their worksite regarding space management and efficiency,” concludes Feneon.

The O Series is for clean liquid; G Series handles most applications.
Gorman-Rupp Company
May 18, 2022
Follow Us