The wheel loaders feature enhancements to the operator cab and more integrated technology to improve ease of use and productivity. 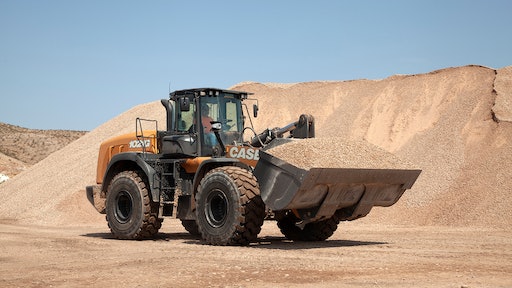 On April 21, CASE Construction Equipment announced new enhancements to its G Series wheel loaders. The company said during its virtual launch event for the new machines its goal was to provide improved quality of operation through these updates.

Major updates CASE made to achieve this goal were made to the cab to make machine operation easier and more comfortable. In addition, new technology is available on the wheel loaders direct from the factory to help improve productivity and efficiency for operators.

“Wheel loaders — especially those in production and heavy working environments — achieve significant improvements in performance and profitability when you shorten cycle times, simplify operation and increase uptime,” said Andrew Dargatz, Product Manager, CASE. “Each of the enhancements introduced in the new CASE G Series loaders drive those incremental improvements that lead to big gains in productivity and efficiency.”

Increased ease of use

Dargatz during the virtual launch event the operator cab was a major focus for CASE when it first introduced the G Series wheel loaders in 2016. On the newly updated models, forward visibility was improved through the inclusion of a new, larger single curved piece of glass. Rear visibility was improved as well with a standard rear grid defroster and optional integrated rear view camera.

A new touchscreen display is included in the operator cab which offers a tablet-like performance. It makes accessing critical machine settings and operational data easier which leads to simpler operation for customers. Dargatz noted the display also serves as a gateway to several of the new features included on the wheel loaders.

Among these new operator control features are adjustable electrohydraulic controls. They allow users to independently set lift (boom) and tilt (bucket) functionality to smooth, moderate, or aggressive via the touchscreen display. “This allows you to adjust, boom, and bucket responsiveness to the type of work you do for the comfort of the operator,” said Dargatz.

He explained that the smooth setting gives operators the most control and deliberate movement, such as when loading pallets of brick or block, and wanting smoother operation to prevent the load from shifting. Moderate is the factory setting and provides a more standard responsiveness. And aggressive provides the most immediate response to the joystick operation for operators that like to move more aggressively. This setting also has a very specific action that is in high demand in some applications, fine bucket metering. Operators will be able to top off any load more accurately with visibility.

“These settings allow the operator to really dial in to those independent movements to their preference, and to what makes sense for the job and for the operator,” he said.

CASE also chose to simplify the power modes available on the updated G Series wheel loaders, going from four modes to two—Max and Smart. Dargatz said Max mode is chosen when the operator wants to work at full throttle while the new Smart mode delivers high performance and enhanced operating experience through improved communication between the engine and transmission. “This helps achieve smoother shifting, reduced tire wear, and up to 10% fuel savings when compared to Max mode, all without sacrificing performance.”

The Smart mode provides a ‘set it and forget it’ power mode that will be beneficial for many operators.

A parallel lift capability has been included as part of the new electrohydraulic controls, as well, to aid customers who use pallet forks. This setting is now available across the entire wheel loader lineup. It automatically maintains the angle and position of the bucket or forks, and enabling ride control in this mode further minimizes the risk of the material shifting while loading or transporting. Operators can activate it with the simple push of a button, again providing them with ease of use.

New color-coded configurable buttons are also included in the cab of the updated wheel loaders. These buttons are located on the right-hand armrest, right next to the loader control, allowing the operator to more quickly and with minimal movement interact with pre-programmed machine settings or functions to further simplify operations, said Dargatz. The settings are determined by the operator and can include critical functions such as the new payload screen or rearview camera. There are also three additional configurable settings available with these buttons when the new payload system is engaged.

Dargatz said one of the biggest enhancements CASE made to the G Series wheel loaders was the availability of an optional factory integrated payload system. He notes it is a purpose-built system that was designed specifically for the wheel loaders and the applications in which they work.

Offering it as a factory integrated option reduces downtime for customers as they do not have to wait to have it installed; they can begin using it and the machine as soon as they receive the wheel loader.

The payload system is integrated directly into the primary operator display and provides bucket weights, pass counts, accumulated or running weight, job tracking data and more. “This allows operators to precisely load each truck to reduce over- and under-loaded situations by accurately weighing each bucket and cumulatively track the total weight of material loaded into each truck,” said Dargatz. “It also helps operators track total loads and total volume moved over a period of time.”

Users can also track history by customer, truck, material as well as provide ticket histories. In agricultural operations, it can serve as a proof point such as when measuring the amount of lime being applied on a field or ingredients to a feed mix. Dargatz said the onboard payload system drives efficiencies in loading cycles and reduces the situations where operators have to top off trucks as they sit on the scale. It also provides a perspective into the operation of the loader to evaluate operator performance, as well as in the cycle information that can help make future decisions on bucket and machine sizing for an application.

A new tire pressure monitoring system (TPMS) is also included on the wheel loaders. Individual sensors are mounted to the valve stem of each tire, as well as a receiver module, to communicate tire pressure to the display in the operator cab. An alert is sent to operators when tire pressure is outside of a set range so they can be proactive about fixing it. This allows machine operators to continually monitor and adjust tire pressure as necessary to reduce downtime.

CASE’s G Series includes seven models, the 521 through the 1121, with horsepower ratings from 142-347 hp (105.9-258.8 kW). According to Dargatz, there are several key features included on these wheel loaders which have made them popular with customers.

The engine package is one such feature he pointed out. FPT Industrial engines are used in the wheel loaders, as well as an aftertreatment system utilizing just selective catalytic reduction (SCR) technology to meet Tier 4 Final emissions requirements. There is no need for a diesel particulate filter (DPF) or regeneration which helps to minimize downtime while improving fuel economy and engine operating temperatures, said Dargatz.

To ensure optimal cooling for the engine and other machine systems, the wheel loaders feature a CASE cooling cube module in which coolers are stacked in a cube design. This allows for cool, clean ambient air to easily flow through the coolers, said Dargatz. In addition, there is a hydraulically driven programmable auto reversing fan which keeps the machine operating at an optimal temperature and helps keep debris from entering critical machine systems.

On the 521 through 921 machines the cooling cube is positioned directly behind the operator cab to move air away from the tires—which often kick up dust—while also improving serviceability of the system.

Most of the wheel loader models are equipped with a five-speed transmission which enables travel speeds up to 25 mph (40.2 kph). Included on the transmission is a lock-up torque converter designed to improve performance when traveling on roads or climbing grades.

Inclusion of these standard features as well as the new enhancements ensures the wheel loaders will continue to meet the needs of customers in various construction and agriculture applications.