The new Brokk 110 delivers 15% more power than the previous Brokk 100 and includes the company's SmartPower electrical system for optimized performance. 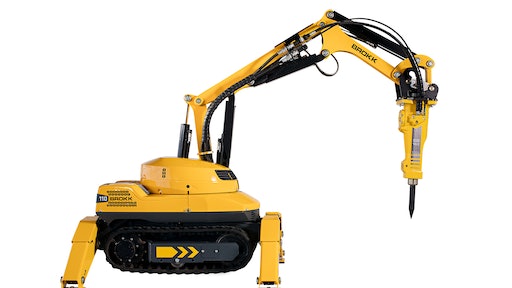 Brokk, the world’s leading manufacturer of remote-controlled demolition machines, presents the Brokk 110. The electric-powered machine features increased demolition power over its predecessor, the Brokk 100, and includes the all-new Brokk SmartPower electrical system. The machine’s improvements increase the reliability and versatility for Brokk customers working on harsh job sites in industries such as construction, metal processing, mining and nuclear.

Brokk featured the Brokk 110 during CONEXPO-CON/AGG 2017 in Las Vegas.

“For more than 40 years, we’ve focused on offering the best possible products,” says Martin Krupicka, Brokk Group CEO. “With the Brokk 100, we saw the opportunity to further enhance efficiency and increase hitting power, which led to the development of the new Brokk 110.”

The Brokk 110 includes Brokk SmartPower, the company’s all-new electrical system, which is also available on the new Brokk 120 Diesel and Brokk 280. The intelligent system incorporates hardened components and fewer moving parts than its predecessor. Brokk SmartPower optimizes performance based on a number of factors, including power supply quality and ambient temperature. The system can sense when a power supply is poor or faulty, making it suitable for generators or unreliable power supplies.

“The Brokk 110 represents the constant innovation at Brokk,” says Peter Bigwood, Vice President of Sales and Marketing for Brokk in North America. “Its new SmartPower electrical system offers customers heightened reliability and durability to ensure increased productivity and safety on the job site.”

The Brokk 110 is compatible with the same wide range of attachments available for the Brokk 100 that it replaces, including breakers, crushers, grapples, rock drills and shears. At 31 in. wide, the compact machine and its attachments fit easily through standard doors and inside passenger elevators. With its low floor load, the Brokk 110 is able to maneuver in otherwise inaccessible areas, such as stairwells or elevators. Its compact size is ideal for a variety of applications, from top-down demolition and interior strip-outs to selective concrete removal.

The EWR130E features a short front and rear swing radius for use in confined spaces.
Volvo Construction Equipment
February 16, 2021
Follow Us