The Aqua Cutter 710V from Aquajet has an overhead reach of 23 ft. and features ceramic nozzles which last 79% longer than steel versions. 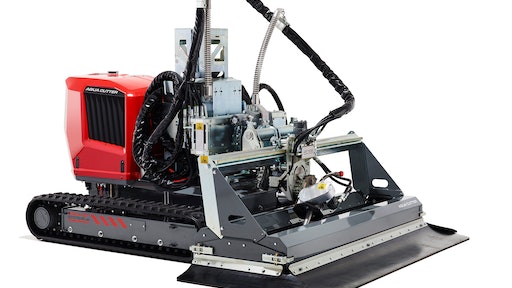 Aquajet Systems AB, a global leader in hydrodemolition machine manufacturing, introduces its farthest-reaching unit, the Aqua Cutter 710V hydrodemolition robot. It’s the largest of its kind and offers exceptional horizontal, vertical and overhead reach — as high as 23 ft. The 710V comes equipped with Aquajet’s hallmark ceramic nozzles that last as much as 79% longer than standard steel versions. Its design makes it suitable for a wide variety of concrete removal tasks, such as renovation and bridge and road repair.

“We designed the Aqua Cutter 710V to give customers the ability to accomplish more work, even in hard to reach areas,” says Roger Simonsson, Aquajet Systems Managing Director. “The robot’s extended reach allows contractors to get at and remove concrete in areas other robots simply cannot.”

The 5,070-lb. (2,300-kg) Aqua Cutter 710V uses 14,500- to 40,000-psi water jets to remove as much as 35 cu. ft. (1 cu. m) per hour of concrete. Contractors adjust the robot’s stroke to control the depth of cuts and vary the pressure of the water jet depending on whether they are removing loose, deteriorated concrete or lowering the sound concrete to a pre-determined depth. A valuable feature of hydrodemolition is that rebar is cleaned and descaled during the process, whereas alternative methods, such as pneumatic tools or milling machines, may damage the rebar or produce microfracturing in the remaining concrete.

Operators can control the 710V from a safe distance using the unit’s radio remote control, either wirelessly or with a hard wire. The remote communicates with the robot’s wheeled power control module.

Contractors use Aquajet’s unique cutting head, extended reach and its multi-axis 3D positioning system to efficiently operate on all horizontal, vertical and overhead areas that would be difficult to get at with other equipment. This includes straight up and down work, such as renovating walls, shafts and furnaces. In addition, the 710V easily removes concrete in corners that would be difficult to access with hand tools. Aquajet constructs the 710V’s steel mast in sections — an innovative design that gives the operator freedom to raise the front power head as high as 23 ft. (7 m) — 10 ft. (3 m) higher than the Aqua Cutter 410V — without additional support.

The 710V features a powerful 18 kW diesel engine. Contractors can add an Aquajet Hybrid Kit, which easily attaches to a diesel-powered Aqua Cutter robot for electric operation in applications where diesel engines aren’t allowed, such as parking garages, inside buildings or in other urban environments. The kit uses an intelligent system to automatically disengage the onboard diesel engine.

All Aqua Cutter robots feature Aquajet Systems’ patented Equal Distance System. EDS keeps a preset distance from the nozzle to the concrete surface, regardless of the angle of the water jet, allowing for maximum efficiency and productivity. Systems without EDS lose as much as 20 percent of the power before the water hits the concrete, greatly reducing productivity and increasing waste.

The hydrodemolition robot features unrivaled ease of access for all maintenance, allowing for minimal downtime. The unique gullwing hood and foldable back cover of the Aqua Cutter robot offers total access for both daily maintenance, such as checking oil levels, as well as periodic service jobs, such as oil and filter changes.

The 710V and 710V XL are both compatible with Aquajet Systems’ line of accessories, such as rotolances and circular power heads, as well as spines and frames.

The EWR130E features a short front and rear swing radius for use in confined spaces.
Volvo Construction Equipment
February 16, 2021
Follow Us