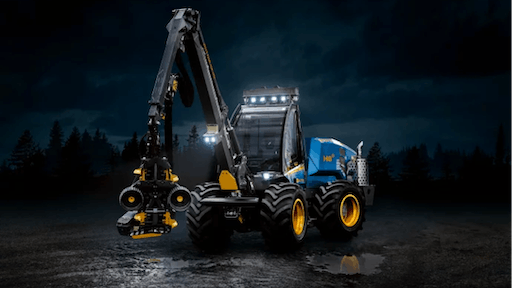 Rottne is having its world premiere at Elmia Wood for a totally new harvester – one so much in demand that it already has several orders before it’s even been unveiled.

Called the H8D, the harvester has an innovative and newly developed powertrain. The result is lower fuel consumption and considerably less ground damage.

“We’ve presented it to the dealers and we already have nine to 10 orders from customers who haven’t even seen it,” says Tobias Johansson, who became CEO of Rottne this spring but has worked for the company for a decade. He has never before met such strong pre-launch interest in a new machine.

The machine contains many innovations. The most important is a totally redesigned powertrain with an engine that meets the latest Tier 4 emissions regulations. Instead of a conventional hydrostatic drive with a gearbox, the powertrain has a hydraulic motor in every wheel hub, combined with traction control. The solution is similar to what the aviation industry calls fly-by-wire. A computer ensures that every wheel supplies the optimal power without skidding.

Like its predecessor the H8D also has swing arms. Together with the new transmission, the result is exceptionally good accessibility.

Forest owners, not least small-scale ones, are demanding smaller harvesters due to the issue of ground damage. This is one cause of the increased interest in small machines. The disadvantage is that they must work longer to achieve the same capacity as a traditional harvester.

With its new H8D, Rottne has found a compromise that should appeal to forest owners. This traditional stand-operating harvester that leaves a small footprint in the forest will meet its customers for the first time at its world premiere at Elmia Wood on June 7-10.

The new autonomous electric zero-turn mower can be used in place of additional labor while the lack of an engine reduces fuel costs.
Sara Jensen
October 9, 2019

Mercedes-Benz Unimog for Forestry Applications to Debut at 2018 INTERFORST

Mercedes-Benz will exhibit three Unimog models designed specifically for forestry applications, including one with a front-mounted chipper.
Mercedes-Benz
July 19, 2018

The T-log is an all-electric vehicle with level 4 autonomous driving capabilities designed specifically for logging applications.
July 16, 2018
Follow Us