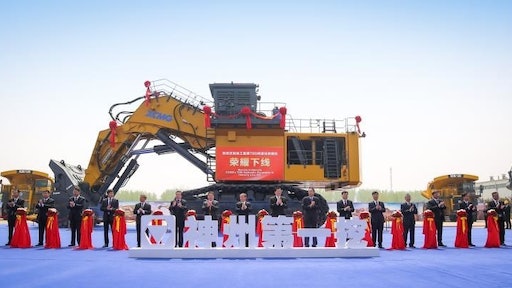 The first 700-ton hydraulic excavator from XCMG, the world's leading construction machinery manufacturer, has rolled off the company's advanced assembly line in Xuzhou, China, heralding a new era for Chinese heavy equipment manufacturing. The successful development and production of the new XE7000E makes China the fourth country in the world to have the capability of producing 700-ton excavators after Germany, Japan and the U.S.

The 700-ton hydraulic excavator is powered by two 1,700-hp motors that can generate stronger force than two Type 99 tanks. Its weight is equivalent to 500 sedans, and is 23.5 m (77 ft.) long. The XE7000E can achieve a maximum thrusting force of 243 tons and a digging force of up to 230 tons, while its bucket can dig up 50 tons of coal with each scoop. It can load and transport 30,000 tons of coal in eight hours, a high level of efficiency that is a major breakthrough for China's mining industry.

"I am extremely proud of the team that helped make the XE7000E a reality. Everyone at XCMG has spared no effort making excavating and mining machinery the No.1 business sector for the company," says Wang Min, Chairman and President of XCMG. "Not only does the arrival of the XE7000E cement XCMG's status as a global leader in cutting-edge heavy machinery manufacturing, it also supports and promotes China's 'Made in China 2025' strategy."

While developing the hydraulic excavator's drive wheel, guide wheel, support wheel, riding wheel and crawler, as well as an innovative soft start dual-motor control strategy, XCMG obtained 52 patents and independent intellectual property claims when designing and building the XE7000E, which is now the largest-tonnage hydraulic excavator in the country.

The underground mining loaders and trucks will be integrated with Sandvik's AutoMine and OptiMine technologies as well as other advanced features.
Sandvik Mining
July 22, 2020

The updated MT65 underground mine truck features a new engine which reduces emissions and an Ejector dump box to aid load carrying capacity in tight spaces.
Epiroc
April 29, 2020
Follow Us