The newly designed slab transporter has a length of 71 m and total transport weight of around 360 tonnes. 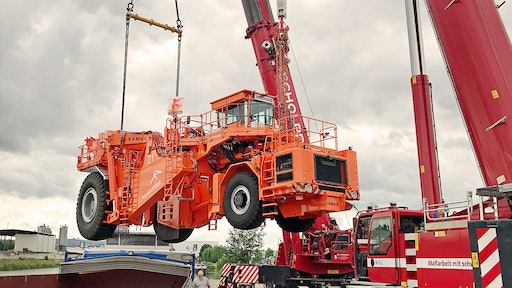 Loading the KAMAG slab transporter onto the ship at Heilbronn harbor.

Kamag Transporttechnik has developed a slab transporter with a hitherto unrivalled payload on behalf of steel giant ArcelorMittal. The steel producer’s call for tender specified a load of 150 tonnes. The customer also expected very high lifting performance from the grippers, which are used to raise the slabs, of 2.5 m in 25 seconds. Slabs, semi-finished products in the steel industry, are large blocks of steel that can weigh up to 30 tonnes each, depending on the design, and are transported in stacks within the steelworks. They can still be up to 900 C when they come off the continuous caster. The resulting extremely high temperature increase in the vehicle requires numerous technical protective measures.

To facilitate the required payload, the Kamag engineers had to completely redevelop the vehicle’s trailing unit, which would bear the highest loads when transporting the slabs. The Ulm industrial vehicle specialists were able to use an existing design and proven drive components for the front end. They broke new ground with the so-called “fatigue calculation”. This enables them to make predictions about the service life of the vehicle construction, for example. The customer stipulated that the frame could not develop any cracks for at least ten years of round-the-clock transporter operations under the extreme working conditions in a steelworks.

Transporting the empty 132-tonne slab transporter to the customer proved equally as challenging as the design of the new slab transporter. Transport experts from Spedition Kübler assisted the vehicle manufacturer in this regard. To move the colossus Kübler used two InterCombi transport platforms with 12 and 10  axle lines and a lifting bridge. Both products come from Scheuerle. Kamag Transporttechnik and Scheuerle are both part of the TII Group of Heilbronn multi-entrepreneur Otto Rettenmaier, and this transport is certainly an impressive example of the synergy between the TII companies.

In total, the heavy load measures 71 m long, 6.6 m wide and 5.4 m high. Two truck-mounted cranes from Ulm-based Rieger & Moser were used for the laborious loading onto the heavy load vehicle. The push-and-pull combi unit travelled 260 km on public roads from the Kamag site in the Ulm-Donautal industrial area to the port at Heilbronn. There, the slab transporter was moved onto a barge for the final stage of its journey to the steel producer’s dock.

Slab transporters are just one of the transport solutions Kamag Transporttechnik supplies to the steel industry. The Ulm manufacturer of special vehicles also makes transporters for slag pots, ladles, U-frames and scrap baskets, as well as industrial lifting and coil vehicles. All of these transporters are designed to withstand the extreme conditions of steel production, such as intense heat, high tonnages, dirt ingress and dusty bulk material.

Unit weighs up to 22 tonnes, in stacks of seven

The customer, the steelworks of ArcelorMittal, a global leader in the steel industry, had advertised for a transport solution for slabs with a payload of 150 tonnes. Slabs are rolled blocks of iron, which are stored temporarily in this form. The customer produces slabs measuring 11.6 m long, 2.5 m wide and 22 cm high in its steelworks. This results in unit weights of around 22 tonnes. The payload required by the client is a big increase compared to its previous slab transporters and also demands more than Kamag’s transport solutions have achieved in the past.

“To achieve the payload of 150 tonnes, we had to completely redesign the trailing unit,” declares Project Manager Berthold Schmidberger. The rear axle with its gigantic 40.00-57 tires that measure twice as high as a man, also performs superbly, delivering a load capacity of 221 tonnes. The two enormous grippers, which are used to lift and stack up to seven slabs on top of each other, are also positioned on the trailing unit. They are also capable of incredible performance, lifting the full payload by 2.5 m in 25 seconds. This was another demand from the client, so as to ensure the economic operation of the vehicle. “These are truly extreme performance times,” reports the Kamag engineer. It is all down to exceedingly powerful hydraulics.

The Kamag engineers used an existing design and drive components that have been tried and tested many times for the prime mover. The in-line 6-cylinder engine with its 15.2-L cubic capacity, emissions compliant with Tier 4 final, performance of 403 kW and maximum torque of 2,472 Nm, is one example. A likewise well-proven power shift transmission delivers the power to the front axle of the slab transporter.

The vehicle developer broke a lot of new ground with the design of this giant. “We had to perform a fatigue calculation for a customer for the first time,” says Schmidberger, explaining the very particular challenges of the order. “These calculations enable us to determine material fatigue for a specific load and over a specific period of time.” Kamag had to assure the demanding client that the vehicle frame would not break for at least 10 years even under the most extreme loads. A special feat of engineering, as the steelworks operator requires 5,500 operating hours a year, which is effectively round-the-clock operation.

Aside from the mechanical system and hydraulics, the transporter’s advanced electronics also facilitate very special functionality. It can, for example, be controlled remotely from a control station, as well as from the cab. Kamag has also fitted it with sensors that detect all the driving and working conditions of the transporter. Eventually the vehicle is meant to perform its tasks in a highly automated way. A number of necessary sensors are installed to do so, further detection of operational surroundings needs to be developed.

Equipping the vehicle with cutting-edge technology for automated driving makes sense. Ultimately, the working conditions in steelworks are extremely challenging for people and materials. When the slabs come out of the press their temperature is around 900 degrees. The workers should be exposed to this incredible heat as little as possible. Even for resistant material this heat is a strain. That’s why the slab transporter from Kamag is equipped with numerous heat protection plates. In addition, the tires on the rear axle, which get really close to the glowing slabs during transport, are each filled with ten tonnes of water. The water helps to dissipate the heat that penetrates the synthetic tires.

Many months of route planning

The technology was subjected to extensive testing following construction and coordination with the client. It was a good 6 months after development before the finished slab transporter was able to leave the Kamag site and set off on its way to Heilbronn. “We spent 4 months planning and testing the route with Spedition Kübler and getting the necessary permits and documentation in place,” says Michael Schanz from Kamag’s Internal Sales department, who is responsible for shipping the slab transporter. In addition to the MAN TGX at the front, a pushing vehicle is also used at the back of the transport: a Mercedes Actros 4160, likewise with four axles and a powerful V8 under the cab. Between them, a lifting bridge sits on two InterCombi platform trailers with 12 and 10  axle lines respectively

Transport expertise from one place

The transport combination represents the bundled expertise of the TII Group, the corporate group of Heilbronn multi-entrepreneur Otto Rettenmaier, as the bridge and the two transport platforms come from Scheuerle. The Pfedelbach company is also part of the TII Group. A heavy transport like this could not be achieved with no outside expertise at all though. Two mobile cranes arrived to lift the slab transporter onto the lifting bridge. It took the teams from Kamag, Kübler and UIm vehicle crane company Rieger & Moser a whole working day to load the vehicle and make it secure for transport.

The heavy load needed one day and four nights to complete the 260-km journey to its initial destination, the port at Heilbronn. The heavy load specialists from Kübler then moved the slab transport onto the barge. It was another five days before the transporter completed the final leg of its journey by barge to the dock at the steelworks. It will now be used to move blazing hot slabs extremely cost-effectively – thanks to the outstanding achievement of the engineers from Kamag Transporttechnik.