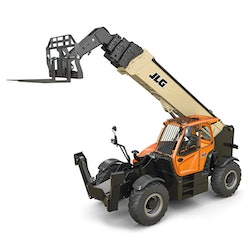 JLG Industries Inc., an Oshkosh Corporation company introducs the newest model to its line of telescopic handlers. The JLG 1075 was displayed at CONEXPO 2020.

The JLG 1075 was developed as a result of customer input, requesting a 10,000-lb. class telehandler with greater height and reach. The new model features a 75-ft. boom that can lift up to eight stories – a full two stories more than comparable, competitive models – and offers a 60-ft. reach.

“Customers wanted a telehandler that could reach higher than six stories and extend further into a building than existing models so they could place materials where they were needed, rather than placing them, then reloading them for movement to the work area,” says John Boehme, Senior Product Manager, Telehandlers, JLG. “Reducing this type of material re-handling will drive significant productivity gains and, in some cases, eliminate or delay the use of cranes on a job site.”

The high lift and reach of the 1075 make it ideal for use in the film, building construction, steel erection, demolition and renovation industries.

Telehandlers are often used to place loads on top of buildings, such as setting HVAC units into place on rooftops. With its longer boom length, the 1075 can achieve precision placement further onto a building, effectively doubling the reach of a telehandler with a 55-ft. boom.

“We designed the 1075 to have the advantages of a crane without its associated high rental cost and cumbersome assembly requirements,” says Rogerio Dos Santos, Senior Director of Engineering, JLG. “The ability to extend our lift height, reach and precision placement capabilities is just another example of how JLG continues to advance its market leadership position to offer its customers more productive equipment.”

Optional technologies include SmartLoad and a remote-controlled boom, which can be used by an operator to place material at height from outside the cab. The remote control can eliminate the need for two people – one in the cab and one at the location where the material is being placed – for improved efficiency on the job.

Versatility is key when it comes to telehandlers and the 1075 is no exception. The unit accepts a wide range of standard telehandler attachments, as well as a number of JLG specialty attachments, including its new sheet material handler for precision placement of drywall, plywood and similar materials inside of new buildings or during renovation work.