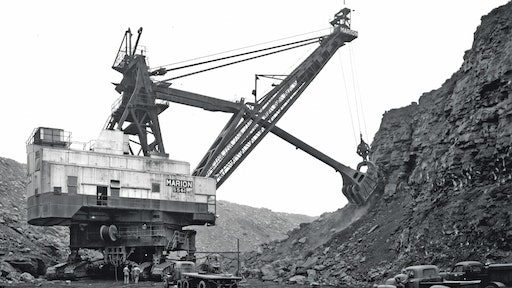 To meet demand for greater productivity in overburden removal, Bucyrus-Erie developed a counterbalanced dipper hoist for stripping shovels in 1930. It connected the dipper hoist drum to a vertically mobile counterweight, thereby increasing payload capacity and energy efficiency. Marion Power Shovel responded in 1932 with its own rack-and-pinion counterbalance system. But Marion revolutionized stripping shovel design in 1940 when it patented the knee-action crowd.

The stiffleg is mounted to the frame of the upper works, inside the boom base, and it pivots back and forth above the plane of the boom, moving with the dipper handle as it is crowded forward and backhauled. The action at the joint atop the stiffleg resembles the bending of a knee; the apparatus was also called a “grasshopper leg” front end, because of how the dipper handle and stiffleg appear to fold like a grasshopper’s leg.

This design, which made possible the largest shovel ever built, had several benefits. Digging power increased at the point where such power was most needed as the bucket was crowded into the bank. The bucket moved horizontally into the cut, providing a long radius for cleanup work and keeping the bucket teeth from disturbing the underlying minerals during its arc of travel. Swing efficiency was increased by placing the crowd machinery closer to the machine’s center of rotation. A lighter boom enabled greater bucket capacity and further enhanced swing efficiency, and torsional and bending stresses were eliminated from the boom by connecting the dipper handle to the stiffleg instead of the boom.

Individual memberships are $30.00 US within the U.S. and Canada, and $40.00 US elsewhere. We seek to develop relationships in the equipment manufacturing industry, and we offer a college scholarship for engineering students. Information is available at www.hcea.net, by calling 419-352-5616 or e-mailing info@hcea.net.