The Otis shovel was the earliest known steam-powered, single-bucket excavator, and it greatly improved the efficiency of at-grade excavation. 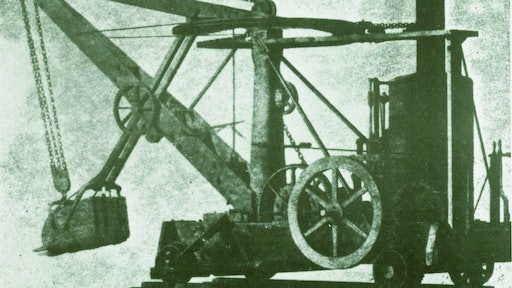 In the early 1800s, large-scale excavation for canals and railroads required thousands of men who dug by hand and handled hundreds of teams to move spoil. The growth of railroads in particular required something better. The firm of Carmichael, Fairbanks and Otis was constructing a segment of railroad near Canton, Massachusetts, with such a force in 1835 when William S. Otis, a partner in the firm, had an idea. With the assistance of a friend, Charles Howe French, Otis developed a steam-powered “Crane Excavator.”

This machine had a fixed mast and swinging boom like that of a quarry derrick, with a bucket attached to the end of a dipper stick that was mounted to the boom. The boom was lowered to enable the bucket to dig in an arc through the cut face, then raised and swung to one side or the other to dump. The swinging and dumping were accomplished manually; a man on each side of the shovel hauled to on a rope to swing the boom back and forth, and the man on the dumping side tripped the bucket. The shovel was powered by a vertical boiler that drove a double-drum chain hoist, and the machine traveled on four railroad wheels. Otis patented an improved version of this shovel in 1839; while the improved machine was working in Massachusetts on its first project, Otis died of typhus at the age of 26.

Other excavating machines, employing such devices as treadmill power or a chain-mounted bucket line, preceded the Otis shovel in concept if not reality, but none were as practical. The Otis shovel was the earliest known steam-powered, single-bucket excavator, and it greatly improved the efficiency of at-grade excavation by eliminating the armies of shovel-wielding laborers. It remained in production in small numbers until the early 1910s. With numerous improvements in design and capacity, the basic concept of a railroad-mounted shovel with a swinging boom was continued by several manufacturers into the late 1920s, and its digging action can be seen in today’s giant cable and hydraulic-operated mining shovels.

The Historical Construction Equipment Association (HCEA) will have a 1:10 scale model of the Otis Steam Shovel on display at its booth GL3138 at CONEXPO-CON/AGG, and orders for the model will be taken at the booth.

HCEA is a 501(c)3 non-profit organization dedicated to preserving the history of the construction, dredging and surface mining equipment industries. With over 4,100 members in twenty-five countries, our activities include operation of National Construction Equipment Museum and archives in Bowling Green, Ohio; publication of a quarterly magazine, Equipment Echoes; and hosting an annual working exhibition of restored construction equipment.

Individual memberships are $30.00 within the USA and Canada, and $40.00 US elsewhere. Information is available at www.hcea.net, or by calling 419-352-5616 or e-mailing info@hcea.net. We are very interested in building relationships with the manufacturers whose history we seek to preserve, and seek to establish a liaison committee of manufacturers’ representatives.