Merlo receives Gold Medal and other awards at Agritechnica

At Agritechnica 2013, Merlo's received three different awards for its innovative products including the prestigious Gold Medal award for its Turbofarmer 40.7 Hybrid. 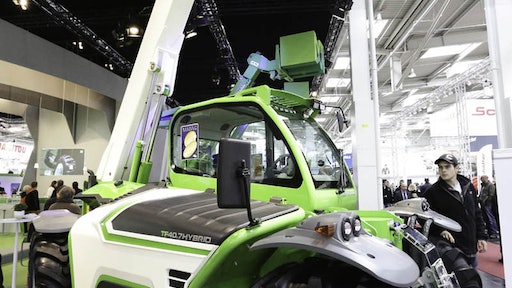 On Monday November 11 , the President of Merlo S.p.A., Amilcare Merlo, received the Gold Medal in Hanover for the new Turbofarmer 40.7 Hybrid. This important award was selected by a panel of international technical experts and presented during the international trade show for the agricultural and working machinery sector Agritechnica 2013, attended by 2,900 exhibitors from all over the world.

This result is even more significant considering that only four gold medals were awarded out of a total of 393 participants in the running for the prize for innovation, and also because Merlo is the only non-German company to win this prestigious recognition. This victory, then, as Merlo emphasized on stage during the ceremony, is “worth double.”

This, however, was not the only prize awarded to the Italian telescopic boom manufacturer. Indeed, Merlo was recognized in three categories for products and technologies during the Hanover trade show:

With the new production concept, which provides for the total modularity of the main components of Merlo telescopic handlers, hybrid technology is applicable across the entire range of new Merlo products (which were also presented at Agritechnica), bringing significant advantages in a much-reduced time-frame in comparison to traditional products:

The unique patented features of the hybrid project presented in Hanover are what prompted the strict Agritechnica jury to award the prize to the TF40.7 Hybrid. Developed by Merlo engineers in collaboration with Professor Aurelio? Somà from the Department of Aerospace and Mechanical Engineering at the Turin Engineering Institute, this innovative product and its electric or electro-diesel propulsion system allows remarkable flexibility of use: it can operate in confined spaces - in electric mode - and in open spaces - in hybrid mode, powered by with electro-diesel. This mixed solution means that the prototype offers a very high level of innovation, even when compared to similar technology in the automotive industry.

For the first time in the agricultural sector, Merlo has introduced an electric plug-in hybrid, powered by electricity or electro-diesel. The Turbofarmer 40.7 Hybrid moves and works thanks to a diesel engine and a generator/electric motor with permanent magnets and an efficient motorized electric traction system, combined with traditional hydraulic systems for handling.

In electric mode, the charger is powered by 30-kWh lithium battery, which is silent and emission-free, so it can be used indoors. In hybrid mode, the diesel engine delivers the energy with a constant speed for moving forward, at the same time as charging the battery. Without imposing any limitations on the charger's working performance, this engine architecture allows users to halve the nominal power of the diesel engine. In addition, during low load or low speed operations, common in telescopic loaders, the drive can be fully electric, which, in combination with the reduced engine size, can reduce fuel costs and CO2 emissions by up to 30%. A further reduction in costs can be obtained by charging the plug-in hybrid by connecting to an electrical network or source of renewable energy (such as solar panels or biogas generators).

First and foremost, the architecture of the hybrid electric-hydraulic system designed for this research allows users to make better use of the available power in a working vehicle whose primary functions are both traction and movement of the telescopic boom.

Indeed, the overall power can reach the same horsepower as more powerful traditional configurations. The relationship between the two diesel engine/generator units and the electric traction motor is controlled by an electronic power controller specially developed for this type of machine, able to work the electric traction and move the boom in tandem.

The electric motor can also operate alone, using the charge from the innovative lithium polymer batteries. In these cases, the diesel engine is switched off and the machine operates in absolute silence, with zero emissions.

Additionally, the movement of the boom and the other functions obtained through a conventional hydraulic pump can also take power from both the diesel engine and the electric motor, thanks to an electronically-controlled mechanical power split, allowing the user to choose when to use hybrid mode.

The power autonomy in electric-only mode obviously depends on the capacity of the recharged battery pack, but thanks to the thermal engine and the on-board power control, this is almost superior to conventional cars in the same category, and is designed to achieve a considerable energy and fuel saving during the working cycle.

In addition to this significant reduction in consumption, the various fields of application are substantial, allowing users to work in tunnels, indoors or wherever working machinery is required, whilst containing both exhaust gas emission and noise levels.

This success is the result of many years of collaboration between Merlo and the research group coordinated by Professor Soma, and is therefore also a concrete example of technology transfer in the region.