Motiv Power Systems has developed North America's first and only all-electric garbage truck, which has been delivered to the City of Chicago, and was on display at HTUF. 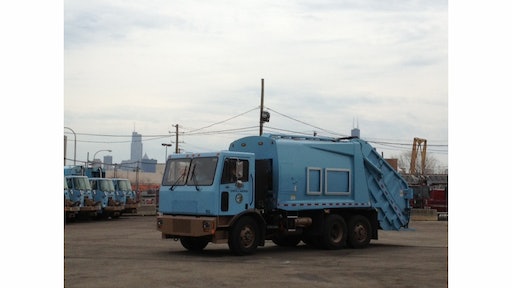 The City of Chicago is now home to the first and only all-electric garbage truck in North America. Designed by Motiv Power Systems, the Electric Refuse Vehicle (ERV) was made possible using Motiv’s modular, plug-and-play electric Powertrain Control System (ePCS) technology and in collaboration with Chicago’s existing refuse truck vendors. The City of Chicago is currently running the Motiv ERV on different residential refuse and recycling routes of up to 60 miles, saving 2,688 gallons a year. The public will be able to ride in the ERV for the first time at the CALSTART High-Efficiency Truck Users Forum (HTUF), Ride and Drive event in Chicago on September 23, 2014.

“We are constantly looking to modernize and improve the city’s fleet operations through environmentally conscious choices,” says David Reynolds, Commissioner of the Chicago Department of Fleet and Facility Management. “The City in a Garden is proud to be home to North America’s first all-electric refuse and recycling truck, and we look forward to examining how this truck can boost efficiency, reduce emissions and save tax payer dollars in the future.”

To supply Chicago with North America’s first all-electric garbage truck, Motiv Power Systems won the competitive contract in 2012, against two other companies in the semi-final round. Motiv has emerged as the leader in electric trucks with its scalable ePCS, and was recently recognized in the 2104 Inc. 500 Fastest Growing Companies rankings as 12th in Energy and 241st overall.

The first ERV, delivered earlier this year, is one of an estimated 20 that could be built within the exclusive five-year purchase order. The development and production of the Motiv ERV was facilitated through a Department of Energy grant to the City of Chicago.

“While Motiv did not have an ERV at that time, our ePCS was installed on other truck types, and we leapt at the chance to use the ePCS on a significantly larger truck,” says Motiv Founder and CEO Jim Castelaz. “The Motiv ePCS’s flexibility allows it to run on electric trucks as diverse as a Type A school bus to this ERV without costly powertrain redesigns.”

Chicago specified that this ERV must meet the demanding requirements placed on all of its garbage trucks. This included 60 mile range, a payload capacity of nine tons and 1,000 pounds per cubic yard of compaction. These specifications make the ERV capable of use anywhere in Chicago. To supply enough electricity to move the truck and power the hydraulics all day, the ERV is equipped with 200 kilowatt-hours of energy, in 10 battery packs. Full charge time is 8 hours using the Motiv Universal Fast Charger.

“Besides dramatically lower fuel and maintenance cost, value of the ERV goes beyond strict payback,” says Castelaz. “Each truck offsets over 55 barrels of petroleum and 23 tons of carbon dioxide each year. Plus, no one wants large, noisy truck engines idling next to their house at 6 am when they could have clean, and quieter ERV’s keeping the morning peace instead.”

This ERV was built using a Loadmaster 20 cubic yard rear loader body – the exact same model of body used on other City of Chicago refuse trucks. The chassis, manufactured by Crane Carrier, was furnished by Cumberland Servicenter.

“By developing our electric trucks in collaboration with existing diesel truck manufacturers, we build vehicles that are just as tough and capable as the diesel versions these partners build,” says John Knudtson, VP Business Development at Motiv. “We are leveraging the expertise of existing truck manufacturers. They can offer electric options of their existing trucks, to their existing customers, and service them with their existing infrastructure. The Chicago ERV is illustrative of this unique business model and is applicable throughout the US in many different truck segments.”