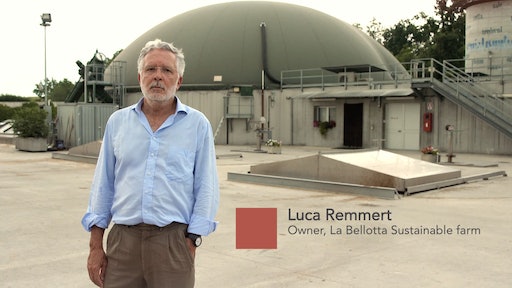 Night and day for the past six months, a bright blue tractor has sat perched atop the sloping roof of the Sustainable Farm Pavilion at the 2015 Expo in Milan, Italy. The alternative fuel technology powering that tractor is a promising cue towards the future of agricultural mechanization, one where farms will be energy independent as well as being able to fundamentally reduce their environmental footprint.

A new video produced by CNH Industrial, parent of global agricultural machinery brand New Holland Agriculture, looks at its prototype tractor, known as the Methane Power tractor, and what it is capable of achieving.

The T6 Methane Power tractor is a second generation prototype based on a standard New Holland T6 tractor. What makes it different from present day machines used for farming is that it is powered by a natural gas engine manufactured by FPT Industrial, also part of CNH Industrial’s brand portfolio. It is a demonstration of the type of innovation and technology that CNH Industrial and its brands are pioneering to increase agricultural productivity and make sustainable farming easier to help feed the world.

In the video, CNH Industrial speaks to representatives from New Holland about the Methane Power tractor’s presence at Expo 2015 as well as its real world testing at the ‘La Bellotta’ farm in Venaria, Italy, where it is undergoing field trials. La Bellotta is the farm where New Holland Agriculture is deploying its “Energy Independent Farm” concept. The objective is to generate the energy it needs from the crops it already grows, alongside recycled waste byproducts, to run its operations and farming equipment. “With biogas innovation, we’ve been able to restart investment and re-employ people. This is the result of a virtuous process,” says Luca Remmert, Owner of La Bellotta Farm, in the video.

As Expo 2015 reaches its close at the end of October, the past six months of the universal event have seen New Holland Agriculture educate international visitors on sustainable farming practices through its Sustainable Farm Pavilion and bring global attention to its Methane Power tractor and Energy Independent Farm concept.

The second generation T6 Methane Power tractor can bring fuel cost savings of 20% up to 40%. In terms of environmental performance, it has 80% lower polluting emissions than a standard diesel tractor and is already capable of fulfilling future GHG targets, which are expected to require a 20% reduction across Europe by 2020.

CO2 emissions can be further reduced by using biomethane, methane derived from biomass. The only changes to a standard tractor are those associated with the biomethane fuel, all other areas remain unaffected; this opens up great opportunities for achieving overall GHG reduction targets. In the context of a future Energy Independent Farm, such as La Bellotta, which can grow the biomass and recycle its waste byproducts to produce its own biomethane, not only could CO2 emissions be eliminated, but fuel costs could also be cut by as much as 40%.