FTR reports its Trucking Conditions Index showed positive upward movement in June to a reading of 7.64. 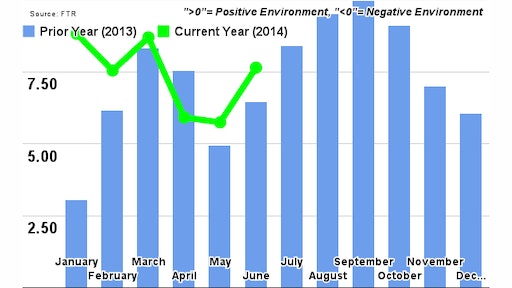 FTR’s Trucking Conditions Index (TCI) showed some positive upward movement in June after moderating slightly during the prior two months. At a reading of 7.64, the June index reflects an environment in which carriers are gaining market power but rates are struggling to keep up with cost inflation. The index rose 1.9 points from May, yet April and May were substantially below the 8.35 average seen during Q1.

Details of the June TCI Index are found in the August issue of FTR’s Trucking Update, published July 31, 2014. The ‘Notes by the Dashboard Light’ commentary discusses how, despite the slow pace of the overall economy, the goods producing sector that powers truck freight continues to enjoy a strong recovery. Along with the TCI and ‘Notes by the Dashboard Light,’ the Trucking Update includes data and analysis on load volumes, the capacity environment, rates, costs and the truck driver situation.

Jonathan Starks, FTR’s Director of Transportation Analysis, comments, “The headline number of 4% for GDP growth in the second quarter is getting plenty of news but the real number for getting a sense of true demand in this economy is the Final Sales component of GDP. It stood at 2.3% in Q2, well above the -1% seen in Q1 but noticeably below the 3.5% it averaged during the second half of 2013. Truck freight continues to show steady increases and the capacity situation is unlikely to loosen up any time soon. These good developments are partially offset by slower than expected growth in contract rates. Spot market rates are still elevated, although they have shown normal moderation during the summer months. We expect to see both spot and contract rates continue to rise as we get into the fall shipping season.”

Take a look at this fun review from the largest show of 2022.
Caterpillar Inc. - Industrial Engines & Power Systems
November 1, 2022
Follow Us