The FTR Trucking Conditions Index rose to a reading of 8.49 in July, reaching one of its highest levels in 2014. 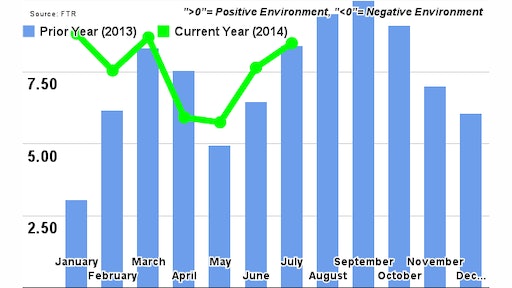 FTR’s Trucking Conditions Index (TCI) increased to a reading of 8.49 for July, one of the highest points this year. The high values reflect rising prices and service lapses caused by the current capacity crisis. The TCI could go even higher this fall if the economy accelerates as expected. Truck utilization remains within 100 basis points of record levels meaning that any additional growth in the economy and associated freight will strain capacity even further, pushing shipping costs higher.

Details of the July TCI are found in the September issue of FTR’s Trucking Update, published August 29, 2014. The ‘Notes by the Dashboard Light’ commentary discusses the pending capacity crisis including the impact of the current driver shortage. Along with the TCI and ‘Notes by the Dashboard Light,’ the Trucking Update includes data and analysis on load volumes, the capacity environment, rates, costs and the truck driver situation.

Jonathan Starks, FTR’s Director of Transportation Analysis, comments, "When looking at the truckload market, for much of 2014 it has been a tale of two markets with spot activity very strong, especially in rates. The contract market has been less robust but still showing signs of stress on capacity, costs and rates. You can expect to see those two markets merge this fall as a shipper’s core carriers get further stressed and contract rates move higher. The public announcements of strong driver pay increases by fleets are a testament to this fact. Despite easing over the summer, spot rates are still elevated versus last year. Keep an eye on spot rate as we head into September as they will be an early indicator of capacity shortages and stress in the system."