When the military asked for a safe, effective hybrid technology that did not require batteries, one company delivered. 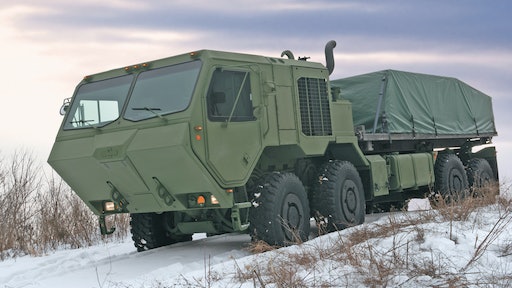 The ProPulse technology from Oshkosh Corp., Oshkosh, WI, started off as a direct request from a military general for a safer, more efficient piece of equipment. Don Verhoff, executive vice president - technology, Oshkosh Corp., received the query back in 1999 to develop a hybrid electric drive system for the larger military vehicles.

When Verhoff asked the general to elaborate, he answered with three very specific criteria. The general wanted a vehicle that contained absolutely no batteries. The military had been experiencing extensive problems with the batteries on the vehicles and wanted to avoid the component, period.

Secondly, the vehicle system was to be safe enough to be worked on and not injure or kill soldiers. When the machine was shut down for repair work, it needed to have a low enough voltage so a mechanic could work anywhere on the vehicle without fear of electrocution.

The third criterion was for the vehicle to have the ability to generate electric power up to the capacity of the engine. "Power generation in remote areas has always been a problem as far as transporting generators into areas where there are no facilities," explains Verhoff.

Vehicles equipped with the ProPulse system have been in the forefront of disaster areas, such as after Hurricane Katrina hit back in 2005. "They brought in one of our vehicles with ProPulse and were able to power a hospital unit. The basement of the main hospital was full of water. They brought in electric pumps, and the truck powered those pumps for several days pumping all of the water out," says Verhoff.

Funding the development of a new technology is an important part of the process. Oshkosh worked together with the Dept. of Defense (DOD) and the Dept. of Energy (DOE), both based in Washington D.C., and the National Renewable Energy Laboratory (NREL). NREL is a national laboratory of the DOE, Office of Energy Efficiency and Renewable Energy, operated by the Alliance for Sustainable Energy LLC, based in Golden, CO.

Oshkosh and its partners set up a program to develop vehicle systems that would meet the initial three criteria, on top of a request from NREL to have the technology be deployable beyond the military into commercial sectors. Since Oshkosh has a refuse business (McNeilus Co. was acquired by Oshkosh Corp. in 1998) the group was offered as a possible commercial sector, which NREL accepted with interest.

Over the years, Oshkosh has developed the system and implemented it on military equipment such as the HEMTT (Heavy Expanded Mobility Tactical Truck) which provides transport capabilities for re-supply of combat vehicles and weapons systems.

The HEMTTs, equipped with ProPulse technology, have been running durability tests at the military proving grounds in Aberdeen, MD. Oshkosh is looking to put the vehicles into service with the hybrid power system in the next year or two.

As with many hybrid systems, regenerative braking is a key part of energy efficiency. ProPulse uses a modular series hybrid system that simplifies the transmission of power to the wheels. (For more information on hybrid technology, see OEM Off-Highway's March 2008 issue).

Per the general's specific requests, the system has no batteries, instead opting for ultra-capacitors for energy storage. "We turn the generators into electric motors and pump the power back into the capacitor bank. The capacitors have the ability to recharge and discharge very quickly. A braking event on a big truck can take anywhere from 2-10 seconds. That amount of recharge time can take a capacitor from 50 to 90-95% power," says Verhoff.

"We've developed a capacitor bank in the range of one to three mega joules of energy, capable of supporting a start-stop cycle for a refuse truck running all day in service. Our goal was to have no service required for at least 10 years. Right now we're demonstrating 12 to 14 years based on our accelerated test cycle."
The ProPulse system was designed to be a basic one-size-fits-all system. "Any tailoring that would occur would be the programming of the functions of a particular application. As far as the hardware is concerned, that would cover a large range of vehicles," says Verhoff.

Oshkosh Corp.'s long-term goal for the ProPulse technology is to work with a number of manufacturers and put vehicles in the field that are both safe and efficient. "Our focus is on enhancing performance characteristics while making trucks environmentally friendly," says Robert G. Bohn, chairman, president and CEO, Oshkosh Corp.

Pulled into the combat field

TRP Leaf Springs are produced from alloyed steel that is formed, forged, threaded or heat-treated for a variety of applications.
PACCAR Inc.
July 10, 2021

Sealing solutions made from the AU30000 material are resistant to water and synthetic hydraulic fluids.
Freudenberg-NOK
July 4, 2021
Tires & Wheels

Several new component technologies for the heavy equipment industries are currently in contention for the annual Top New Products of the Year award.
Sara Jensen
May 18, 2021
Follow Us