Slim Down That Waste 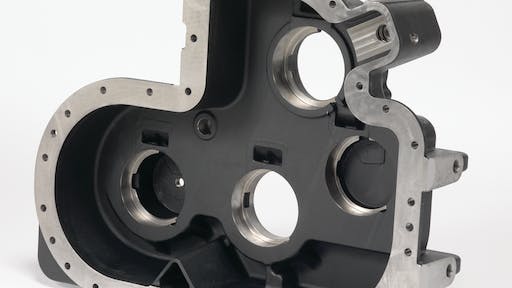 Everyone wants more efficiency, whether it's better gas mileage or just getting more tasks accomplished in a day. Lean manufacturing is a production system that dates back to the early 1900s with Henry Ford's automotive assembly line and Frederick Taylor's concept of Scientific Management which stated that every task could be distilled down to one best method by performing time studies and standardizing.

Taiichi Ohno, founder of the Toyota Production System, says that the purpose of lean is to "produce what is requested by the customer." Seems simple, but there's more to it. Producing what a customer requests means producing nothing more and nothing less than what is asked for, and delivering no sooner or later than scheduled.

Toyota began instilling lean practices in the late 1940s and continues to develop its lean manufacturing processes because, as says Jerry Jackson, president, APEX Precision Technologies, "Lean is a journey, not a destination." You will never reach ultimate leanness, because there will always be things that can be simplified, improved and made more efficient.

APEX Precision Technologies, Camby, IN, is a certified manufacturer of precision machined parts, including CNC milling and turning capabilities.

Founded in 1951, the company's core customer was Allison Transmissions and Allison Engines, as well as aerospace components. Tim Lamb, vice president - marketing and sales, came to APEX in 1993 with a plan to infiltrate the off-highway market in order to help the company increase its production volume.

Lamb and the APEX team successfully moved from sporadic orders of 25-50 parts into volumes of around 15,000-20,000 parts per year of a specific part number.

With a consistent working partnership with manufacturers such as Toyota Industrial Equipment Mfg., Dana, Arvin Meritor, and Mitsubishi Caterpillar Forklift America Inc., APEX wanted to do more for its customers.

Three years ago, APEX decided that with an increase in sales, $3 million in 1999 to $27 million in 2008, going lean would develop the business and its capabilities even further. The initial attempt at implementing lean practices involved reading lots of books and a do-it-yourself attitude, but after the first quarter of the year, it was time to bring in outside help. Jerry Jackson, at the time an owner of a lean consulting group and acting consultant, was called in to help.

"I start with the fundamentals of lean and go back to Ohno and Toyota production systems," says Jackson. "The first thing is to develop the 'eyes for waste'. The seven wastes to look for are time, motion, defects, inventory, overproduction, transportation, and unnecessary processes.

"These wastes are things that customers do not want to be paying for anyway. If a customer knew you were wasting time or doing unnecessary processes, they wouldn't want to pay for that, which goes hand in hand with giving your customers the value they are looking for."

After the eyes are developed to find the waste, it must be eliminated. To effectively do so, a supplier must know and understand exactly what its customer is looking for. Not just general volume numbers, but every last detail. For example, making a part look "pretty" may or may not be an important part of the manufacturing process. If painting a gear adds no value, it could be an unnecessary process wasting time, energy and materials.

Thirdly, employees must realize that if the waste is not found and eliminated, a competitor will. APEX found a way to give incentive to its workers with a Gain - Share program. A set percentage of the value added is designated for people costs. If APEX falls below the percentage (reduces people costs), the amount saved is split 50/50 with the workers. "I don't mind paying that," says Jackson, "because when we're paying Gain - Share, APEX is making a lot of money."

Now that the workers are involved and invested in the lean manufacturing process, it's time to map out the specific manufacturing steps to take a task from start to finish. Each step is written down and explored for ways to eliminate waste while still achieving the same end result. This is not exclusively for part manufacturing. The lean system is for the entire company, including office work and as simple as retrieving the mail.

A sensor was placed on the mailbox door. When the door was opened, a signal was sent to a light on an office worker's desk, alerting him the mail had arrived.

While that may seem like a trivial task to fix, it shouldn't. Every second of every day can and should be utilized to produce the most efficient outcome. It is by slimming down the time and effort it takes to complete every minute task, that true efficiency and smooth company operation can be achieved.

In the shop, a team of workers found that the process of picking up the machined part, dropping it in the paint booth, painting it and picking it back up and moving it elsewhere to dry was filled with unnecessary processes. The team designed and engineered a special hook with rollers attached for hoisting the wheels and painting them while still raised and moving them without ever taking the part off of the hook. The cycle time has already been reduced by six minutes.

Now that the eyes for waste are developed and alert, the customer is understood, the workers are involved, the processes are mapped out and waste elimination has begun, it's time to create a flowing work environment and build a stable organization.

A flexible manufacturing system at APEX utilizes three machining centers tied together with a service rail car. Castings or forgings to be machined are loaded into the car and taken to the specific machine. "We have 22 pallets, so in theory you could run 22 different part numbers," explains Lamb. "We can run two pieces or 200,000. Once a machine is tooled, it's tooled."

Building a stable organization for APEX meant focusing on a few strong companies and growing the relationships to prosperous and stable partnerships. APEX's first work with Toyota's forklift business came in 1993 and has grown to be one of its biggest customers. Over the 15 years working together, Toyota's work with APEX grew considerably. This year APEX won the Toyota Supplier of the Year award, showing just how strong and successful the partnership has grown to be.

"We don't have 50 customers, we have eight, and we look to grow with them," says Lamb. "Three years ago we barely knew Arvin Meritor, and now Arvin, too, is growing with us substantially."

Besides the obvious draw to reduced costs and increased profits, APEX has experienced many benefits since its lean manufacturing implementation. Its workers are independent, involved and personally invested in the success of the company and quality of its products.