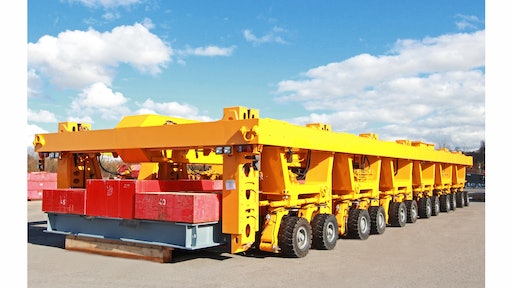 The ladder-type frame of the SCHEUERLE Non-Cassette Carrier enables the transportation of up to 250 tons of steel plates without the need for pallets, which customers said were cumbersome to store or dispose of after shipping the steel.

When its customers in the shipbuilding industry wanted an easier way to transport large steel plates, SCHEUERLE, part of Transporter Industry International GmbH (TII Group), developed the Non-Cassette Carrier (learn more, 11416720). The vehicle enables users to transport steel plates without the use of pallets (otherwise known as cassettes), which are often large and troublesome for shippers to store once they are empty of the transport load. “The pallets [can be] 25 meters long and 5 meters wide, and take a lot of space and cost to move,” says Ralf Grützmacher, Area Sales Manager at TII Group (company information, 11283547).

Grützmacher says SCHEUERLE has a lot of standard transporters and technologies it relies on for the development of its vehicles. When necessary, the company will customize a standard vehicle to more specifically meet a customer’s needs, such as the case was with the Non-Cassette Carrier. While the carrier uses several technologies from the company’s other transporters, SCHEUERLE did have to develop a new frame and lifting devices in order for the vehicle to handle the large sizes of steel plates it would be transporting.

The carrier features a ladder-type frame design that enables it to carry a maximum payload of 250 tons. Seven pairs of lifting forks on the frame are used for picking up the steel plates and placing them on the carrier. As long as the steel does not extend over the entire 25-meter length of the vehicle, each individual fork can lift up to 30 tons.

Because the size of the steel being transported can vary in length (10 to 25 meters) and width (2.2 to 4.5 meters), the forks feature side shift functionality in addition to lifting to easily adjust to the different size steel packages.

The carrier includes a total of 24 hydraulically supported pendulum axles, each of which has two tires attached to it. Along with contributing to the carrier’s ability to carry heavy payloads, the pendulum axles use hydraulic axle load compensation technology to ensure maneuverability on roadways.

Each axle has a hydraulic cylinder attached to it which acts as a cushion when the carrier drives over an uneven roadway. If the carrier drives over a bump in the road, the wheel which has driven over that bump will lift up, causing oil within the hydraulic cylinder to flow towards the opposite wheel on the same axle to help compensate for the uneven ground. This enables the axles and wheels to be more flexible and easily travel over uneven terrain, as opposed to a fixed system which would cause all of the wheels to lift off the ground and possibly cause axles to break.

This suspension flexibility not only keeps the carrier stable on roads, but also when it rolls on and off transport ships.

When first developing the carrier, Grützmacher says the company looked into using fewer tires, but due to the size and weight of the vehicle, it was necessary to use 48 smaller sized tires instead. “We have to turn the wheels 90 degrees,” he says. “So, if you use a very big tire, say with a diameter of 1.5 meters, then you need more space.” This would have required the carrier to be wider, which would have made it difficult for the vehicle to travel over existing roads. “Think about a steel yard or steel mill,” says Grützmacher. “The width of their existing roads is limited, so there was no choice…but to use more, smaller sized tires.”

Each bogie on the carrier—the term used to refer to the connected tires, pendulum axles and hydraulic cylinders—is steered independently and includes a multi-way steering system. This enables the transporter to drive cross wise, length wise or in any direction the operator wants it to go. A steering sensor on each of the bogies measures the position of the bogie and automatically adjusts it to go in the direction it needs to be moved.

Like the lifting forks, axles and other systems on the carrier—including driving and braking—the steering of the bogies is done through the use of hydraulic energy. The carrier’s powerpack, consisting of a 338 kW MAN 6-cylinder engine, fuel tank and hydraulic tank, is used to drive compressed oil to the various hydraulically-driven systems.

Though the carrier uses many of SCHEUERLE’s existing technologies, Grützmacher says the arrangement of them, such as the operator cab, powerpack and the bogies, is completely new compared to other transporters. “We have to understand what the job is, and then we find a solution,” he says.

Search TII Group at www.oemoffhighway.com to see more of the company’s “extreme machines” for unique applications.

The new AFE Series e-axle for off-highway and specialty applications was introduced at bauma 2019.
AxleTech
April 8, 2019

Dana has expanded its electrified product offering for off-highway applications with the new e-Axle and e-Gearbox, both of which will be on display at bauma 2019.
Dana Incorporated
February 6, 2019