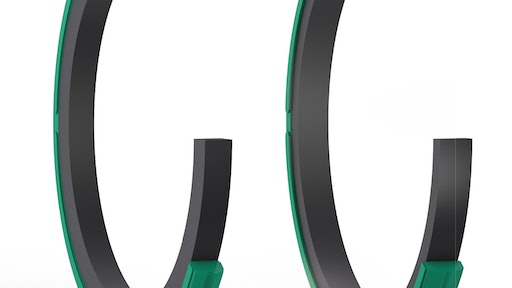 The piston seal lies right at the heart of hydraulic cylinder performance. Located in a groove on the outer diameter of the piston, this seal must contain the high pressure hydraulic fluid without impeding the motion of piston along the length of the cylinder. Since most hydraulic cylinders operate bi-directionally, the seal must be able to handle pressure from either side. The design of piston seals requires engineers to tread a fine line between friction and sealing performance. If the seal allows too much fluid to leak from the high pressure side of the cylinder to the low pressure side, performance is compromised. On the other hand, excessive friction on the cylinder wall leads to accelerated wear and a reduced operating life. Outright failure of a piston seal, known as blow-by, can have significant operational and safety implications, potentially causing construction or materials handling equipment to lose control of its load, for example.

To test the durability of its new material, SKF performed a series of static extrusion tests, installing samples of material into a fixture that applied oil at 500 bar to try and push the material through extrusion gaps of various sizes ranging from 0.15- 0.7 mm. Test samples were kept in the fixture for two weeks at temperatures of between 60-100 C and at the end of the test, the permanent deformation of the samples was measured. “X-Ecopur PS performed significantly better than commercially available alternatives across the full range of tests,” says Swete.

With a suitable material in place, the SKF team then had to create the right sealing geometry. This was familiar territory for the company’s engineers, who have a well-established product development process that combines extensive computer simulation using finite element techniques, rapid prototype development using CNC machine tools and physical testing on custom-made static and dynamic test equipment.

This iterative process led the company to its final design, in which the geometry of the outer surface of the polyurethane slide ring has a shallow “M” shape with two carefully optimised sealing lips. “A seal profile with pronounced sealing points provides more effective sealing forces than a flat surface, improving seal performance while reducing the amount of frictional drag that is created by the seal,” says Swete. “And concentrating the forces on two sealing edges rather than one means the seal won’t tilt in use, which can lead to early failure.”

Further design refinements in the new seal range relate to the operation of the seal energizer. This is a softer rubber component that sits underneath polyurethane glide ring inside the piston groove, pushing the glide ring out against the inner wall of the cylinder. On light duty seals, this energizer is a simple O-ring, while designs for medium and heavy duty use a specially shaped nitrile rubber energizer.

In the new SKF design, side vents are incorporated into the radial side walls of the slide ring to ensure pressure activation of the energizer. This enables the seal to rapidly shift position as the direction of pressure changes, reduce the potential for blow-by and loss of cylinder functionality. The side vents also reduce the likelihood of a pressure trap occurring when the slide ring seals against the radial walls of the seal gland, which can also result in the loss of cylinder functionality.

To validate the designs, prototype seals underwent further arduous testing, involving more than 200 km of movement up and down a 400 mm test cylinder at pressures of up to 250 bar and temperatures of 80 C. Friction and leakage were measured during the test, and after the tests seals were measured and examined to check extrusion and surface wear. “Our testing showed us that our new seal offered better performance than commercially available alternatives,” says Swete. “Indeed, some of the benchmark seals we compared ourselves against actually failed before the end of the testing process.”

“I’m satisfied that we have created a piston seal that not only outlasts any polyurethane alternative,” concludes Swete. “It also performs at least as well as the best PTFE seals, with the added advantage of quick and easy installation that will benefit OEMs and maintenance personal alike.”