This engine is the plan for JCB “off-road” to zero emissions. 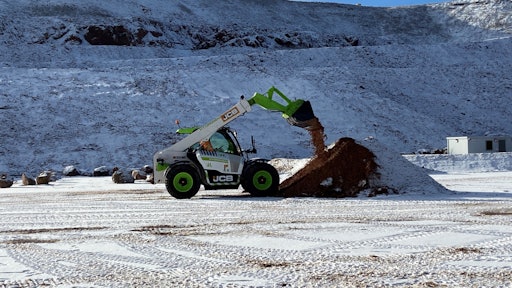 The Load All from JCB operating on hydrogen combustion in a quarry in England.

JCB will feature its new hydrogen combustion engine—the company’s solution for zero carbon emissions for construction and agricultural equipment—at CONEXPO/CON-AGG (CONEXPO) 2023 on the international stage. It will debut in North America.

The company will reveal the new hydrogen combustion engine during CONEXPO at its both, South Hall, Booth S83751. While our team is excited to see it at the show, we are thrilled with the preview we received this week during a media event with JCB North America.

Initially, the company designed an excavator that used a hydrogen fuel cell. However, after testing, the team decided that fuel cell technology was not the best option for their customers. They decided to move toward a hydrogen-combustion solution.

JCB Chairman Lord Bamford leads the project to develop JCB’s hydrogen technology. He said, “The JCB engineering team has made enormous strides in a short space of time to develop a hydrogen internal combustion engine, and it already powers a JCB prototype backhoe loader and a load-all telescopic handler. As the first construction equipment company to develop a fully working combustion engine fueled by hydrogen, I’m delighted we are now able to present this technology on the international stage.”

Wanting to be a leader in environmental, social and governance for the construction equipment sector, JCB has been responsible for a series of innovations on its road to zero. It developed the first battery-electric mini excavator and has developed zero-carbon products with its e-tech range. JCB has a large range of electric construction equipment already, which you can also see at CONEXPO.

The company is committed to reducing emissions. This commitment goes back almost 25 years. We hope you’ll join us to learn more at Booth S83751 during CONEXPO in March.