MOBA is investing four million euros to expand and modernize its headquarters in Germany. 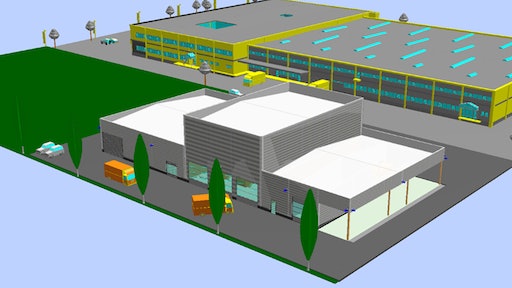 How the MOBA grounds will look in the future: located in the foreground is the new factory hall, which is currently under construction; in the background is the existing main building.

With a symbolic groundbreaking ceremony, MOBA Mobile Automation AG officially began construction of a new factory hall at the company headquarters in the city of Limburg in Germany.

The electronics company is investing approximately four million euros in the construction of the 1,800 square meter hall and modernization of the main building. The new building will be used in the future to equip waste disposal vehicles with MOBA electronics and to accommodate mechanical production. Construction of the new factory hall will be completed by the fall of 2015; the affected departments will then begin moving into the new facilities.

In the future, the existing main building will be used only for offices and electronics production, which will be completely modernized and expanded over the next two years.

"With this investment in new construction and modernisation, we can further improve our production structures and processes. We will thereby create optimum conditions for being able to produce in Germany for the long term as well," says Dr. Holger Barthel, MOBA Executive Officer of Productivity & Logistics. With the addition of a new building at the headquarters in Limburg, MOBA is also prepared for future growth. The company has grown constantly since its founding in Steinbach in 1972. Since relocating from Elz to Limburg-Offheim in 2004, sales increased from 26 to more than 54 million euros and the number of staff members grew from 210 to 482 worldwide, approximately half of whom are located in the headquarters in Limburg. MOBA has invested in new buildings in recent years not only in Limburg but also at MOBA locations in China, India and Spain. New buildings are also currently under construction at the locations in Italy and France. MOBA is thereby preparing for further global growth and can provide even better service on-site with facilities and workshops perfectly tailored to the company.