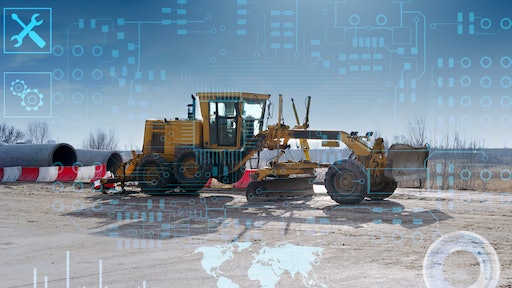 Embedded sensors can provide an array of data to help improve the safety and performance of heavy-duty equipment.
©kosssmosss – stock.adobe.com

As new technology is integrated into long standing vehicle designs, the new abilities often inspire previously unanticipated uses that solve problems, improve efficiency, and lead to competitive advantages. Inspiration comes in many forms. For engineers and mechanical designers, new technology can both expose problems that were previously undetected and provide new thinking to solve problems that were thought impossible.

GPS grade control systems started a major expansion of data-driven innovation in the earthmoving and construction segment in the mid-2000s. These systems combined freely available Global Positioning data with on-board machine sensors and control systems to enable automated grade checking, equipment location, and topographical surveying. These systems played a major part in shaping the modern job site where each vehicle has visibility of survey points, utilities, and elevation while the site supervisors receive real-time locations of the vehicles themselves.

The first GPS grade management systems employed two GPS receivers that were typically mounted on long masts that were bolted to the blade of the vehicle. Two points of position are the minimum required to calculate the angle of the machine relative to the site plan. This arrangement functioned well and transformed construction sites in a few short years, but there were limitations and unforeseen problems. For example, the exposed sensors became a common target of theft which often resulted in the tedious process of disassembling the masts and storing them in a secure location at the end of each workday.

Not only did the assembly and disassembly of the masts take time, but the process also introduced a safety risk. Removing the masts would require the operators to handle the top-heavy poles often in slippery conditions while standing on the blade of the vehicle. In addition, the communication cables and masts themselves could be damaged from low hanging branches or other obstacles common on a construction site. Finally, the mast assemblies could restrict the visibility of vehicle operators.

To solve these problems for the next generation of grade management vehicles, design engineers at one of the world’s biggest construction equipment manufacturers introduced their first mast-less motor grader with grade control in 2019. This new mast-free arrangement relocated the two GPS receivers to the top of the cab where their embedded construction reduced the opportunities for theft.

They then added inertial measurement units (IMUs) on the body of the machine and Temposonics® linear position sensors embedded into the cylinders that control the blade. The hydraulics with the new in-cylinder sensors included the two lift cylinders, circle side-shift, blade side-shift and pitch cylinders. The high-precision data from these sensors is used by the onboard computer control system to determine the exact position of the moldboard in real time.

This resolved the issues of visibility, security, and restricted movements. The enhanced maneuverability allows an operator to cut into grades that would not be possible with the previous double mast design. The new design also enhanced efficiency. Rough cutting of a grade would often induce enough shock and vibration to potentially damage the GPS masts, so they were typically not installed until a precision fine cut was required. Removing the masts from the design means that rough and fine cuts can be completed in the same vehicle setup.

Having new real-time data of the moldboard also inspired the design teams to re-think old problems and offer new innovative solutions. One such problem involved operators causing damage to the motor grader by inadvertently driving the moldboard directly into the tire, cab steps, or other parts of the machine. This would often occur with new operators during training and could result in costly downtime.

However, with the new positioning information from the in-cylinder position sensors the engineers were able to use the controller to create a "keep out zone" that restricts motion when the blade approaches the sensitive parts of the vehicle, while still allowing for full maneuverability elsewhere.

A similar inspiration for new features happened to a leading garbage truck manufacturer when it added in-cylinder position sensors to a family of front-loading vehicles. It is worth noting that the garbage collection industry was initially reluctant to integrate automated, sensor-controlled systems. However, this manufacturer was determined to increase the productivity of its systems and found it could mitigate some real-world safety issues along the way. Construction equipment manufacturers had demonstrated that it was possible to select robust magnetostrictive linear position sensors that not only survived in harsh environments but provided a technological advantage. Could the same be done for waste collection?

The waste hauling industry is very sensitive to loss incurred from vehicle downtime. Profit is driven by achieving the lowest Total Cost of Collection (TCC) where speed and efficiency of completing a collection route enables an expansion in the number of customers that can be serviced with a given fleet. Vehicles that need to stop for unexpected service issues can cause ripple effects which disrupt the entire network of carefully planned routes.

In addition to speed, accuracy and noise reduction are critical to keeping customers happy. Container capture and dumping systems that miss the target can cause unpleasant or even dangerous spills, not to mention delays. Keeping noise to a minimum increases the ability of the waste hauler to run routes at early morning or late evening times when a loud banging of a garbage can getting slammed at high speed into the bed of a truck would be cause for complaint.

One of the garbage truck OEM’s solutions to increase efficiency of customers’ routes was to improve the speed of the dumping mechanism on its front loaders. To do so, the OEM reduced the number of proximity switches and employed in-cylinder positioning sensors to maximize the cycle time of the dump process. The sensors allowed real-time monitoring of the cylinder position.

With advanced control algorithms, the system could maximize acceleration through the dump cycle and then ramp down the speed of the hydraulics as they approached the mechanical stops. This type of "electronic cushioning" is a common benefit of in-cylinder sensors that prolongs the life of the vehicle by reducing the impact at the end of travel faster than an unassisted operator. It also has the benefit of minimizing the noise associated with hard stops even while maximizing the speed of the cycle. In addition to reducing the complexity of the controls, integrating the sensors inside of the hydraulic cylinder made them less prone to environmental damage such as tree branches, harsh weather, or even human tampering.

Once the initial benefit of the in-cylinder sensors were realized, the company’s engineering team became inspired to do more with the new data sources and capabilities that were available to them. Like the motor grader manufacturer, their first task was to identify ways to protect operators with new keep-out zones. Where it was previously possible for unskilled operators to inadvertently position the load in such a way that it could damage the cab and cause bodily harm, the data from the smart cylinders could ensure that dangerous positions were off limits and prevent costly mistakes from purely manual operation.

This garbage truck manufacturer has since increased the use of in-cylinder sensors across its product line including its automated side-loader trucks which can align, reach, grasp, and dump residential waste bins with maximum efficiency. This includes the ability to retrieve waste containers that have toppled or been knocked over.

The design teams continue to be inspired by what the new sensors can do and are now investigating advanced vehicle diagnostics to drive preventative maintenance and identify hazardous conditions such as sudden loss of hydraulic pressure or the leaking of hydraulic fluid.

While new technology is being introduced every day, it is often the knock-on effects of utilizing these advances in real-world design which can inspire completely new advancements that were never imagined or thought possible.

This article was written and contributed by Aaron Sabino, Product Manager at MTS Sensors.