At Agritechnica 2013, Fritzmeier displayed the latest version of its ISARIA system consisting of sensors which can be integrated onto a tractor to provide nutrition status of crops. 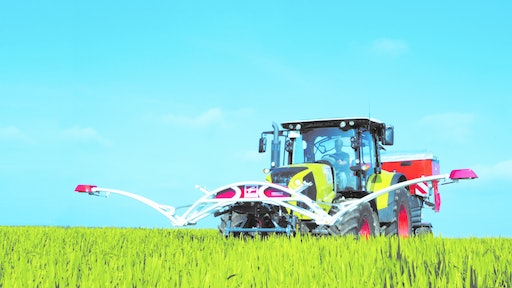 The ISARIA system is the result of extensive research and development work by Fritzmeier Umwelttechnik. The family-operated company has been providing farmers for more than 80 years with pathbreaking products like its roll bar for tractors.

Fritzmeier a pioneer in precision farming: In the 1990s the system “Weihenstephan”, a portable lab kit and a laboratory system for quick, on-site analysis of nitrogen levels, had been introduced. Furthermore the soil sampling devices PROFI 60 and PROFI 90 have been improved continuously, nowadays fully automated and ruggedly designed.

Research and development on plant sensors for the optimization of fertilization began at an early stage in order to offer farmers cost benefits and preventive protection of the environment. Since 2010 Fritzmeier Umwelttechnik has focused on the optimization and further development of the ISARIA system. Thereby customers benefit from past intensive field research in collaboration with the Chair of Agronomy and Organic Agriculture at the Center of Life and Food Sciences Weihenstephan of the Technische Universität München (TUM)resulting in an innovative absolute fertilization system called “absolute fertilizing system following the principle online with map overlay.”

New approaches to reach the market

Since 2013 the ISARIA system has been available globally in two versions: the ISOBUS version as Crop Sensor ISARIA distributed by CLAAS Vertriebsgesellschaft and the Fritzmeier ISARIA, which can be operated using a Windows-based tablet PC and is sold locally by different partners in particular countries.

Both versions use the same innovative sensor technology. The ISARIA comprises two sensor units mounted on each side of a folding bar for front mounting on a tractor. Four LEDs emit light in specific wavelengths within the red and near-infrared range of the light spectrum. The reflected light is measured by a detection unit which is situated between 40 and 100 cm above the crop stand. Based on the detector’s signal a vegetation index is calculated, which highly correlates with the nutrition status of the crop. Data transmission between ISARIA and the tablet PC (Fritzmeier version) is performed via Bluetooth. The Claas ISOBUS version is controlled by an ISOBUS terminal.

The system high precisely measures the nutrition status of the crops. Yield potential maps stored on the tablet PC contain information of all sub-areas within the field. Combination of map content and sensor recommendation makes the crops at all parts of the field get the exact amount of nutrients they require to achieve the specified yield potential (not too much and not too little). This enables sub-area-specific fertilization with a level of precision never before achieved. The innovative map overlay principle helps the farmer to increase financial benefit and simultaneously protect the environment. Additional application modi make it easy to site-specifically distribute any agricultural input, such as growth regulators, siccation agents or fungicides.