The Trelleborg Variable Inflation Pressure system self adjusts the pressure of a combine harvester's tire according to its precise load. 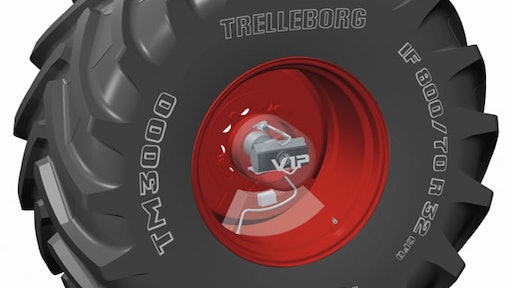 Trelleborg's VIP – Variable Inflation Pressure - system is a smart and autonomous wheel capable of self-adjusting the pressure of a combine harvester’s tire during operation according to its precise load, optimizing the tire’s footprint in order to reduce soil compaction.

The Rexroth GFT 8150 TIS is a fully integrated system which features easy operation via a standard terminal, and was introduced at Agritechnica 2019.
Bosch Rexroth Corporation
November 28, 2019

At bauma 2019, Trelleborg introduced its Phoenix TPMS which is a cloud-based system that integrates tire sensors and a central gateway on machine for real-time tire data.
Trelleborg Wheel Systems S.p.A
April 19, 2019

Integration of sensors into tracks and tires is helping to monitor and improve their performance.
Sara Jensen
February 5, 2019
Tire Pressure Monitoring Systems

During the show Bridgestone will display for the first time its newly launched PressureStat system, as well as other technologies.
Bridgestone Americas Inc.
February 27, 2018

Among the technologies WABCO will display is the new OptiTire tire pressure monitoring system which offers the choice of using external or internal wheel sensors.
ZF WABCO
May 23, 2016