Growing interest in the benefits automated systems can offer have increased their presence within the industry. 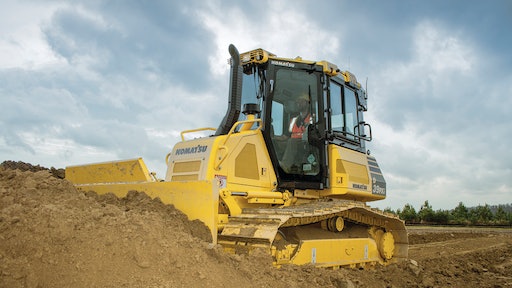 Automatic blade control on the iMC dozer monitors blade load and adjusts blade elevation as necessary, as well as adjusts itself to begin finish grading when that stage of the project has been reached.

Use of automated systems has become more common within the heavy-duty equipment industry as end users have realized the benefits these systems can provide—such as making their jobs easier to perform or enhancing their productivity.

“In North America, the success of machine control technology speaks for itself,” says Jason Anetsberger, Product Manager at Komatsu America Corp. (company information, 10633042). “The installation rates have been increasing, and the technology is becoming more and more prevalent on job sites across the country.”

With the growing popularity of automated systems, some OEMs have begun taking the initiative to integrate systems into their equipment designs. Anetsberger says adding an automated system at the OEM level enables better compatibility with the machine, as well as additional features and benefits the end user might not otherwise get with an aftermarket system.

From first pass to last

In June of 2013, Komatsu introduced the first machine in the company’s new line of intelligent Machine Control (iMC) dozers (learn more, 10963363). Automatic blade control integrated into the dozer enables both rough dozing and finish grading, whereas conventional aftermarket systems provide only finish grading capabilities. “You’re able to utilize that automatic control, and all the accuracy and performance benefits it gives, from first to last pass,” says Anetsberger.

With aftermarket systems, rough dozing is typically a manual job which can increase the chances of errors occurring. Automating both tasks, however, removes the possibility of error, ensuring a more efficient and therefore productive operator. “Being able to automate the rough dozing portion of the dozer operation, we’re able to make sure the machine is being used in the most efficient way,” says Anetsberger. He adds that testing by Komatsu has shown an improvement of up to 13% in dozing efficiency by automating both rough dozing and finish grading.

The machine monitors blade load during rough dozing and adjusts blade elevation in order to minimize track slip and provide efficient dozing performance. Once work has progressed to the finish grading stage, the automatic blade control adjusts itself to begin performing finish grading with a high level of precision.

Developing and integrating the system itself enabled Komatsu to not only provide rough dozing and finish grading capabilities, but also better integrate the components into the dozer. Typically aftermarket systems require the user to mount sensors, cables and antennas onto the machine at the beginning of the work day and remove them at the end of the day. Mounting the components onto the machine also makes them more prone to damage. Komatsu, however, was able to eliminate both of these issues by placing the sensing components within the machine, and mounting the GPS antenna on top of the dozer’s cab. “There’s nothing mounted on the blade, so operators don’t need to be concerned with what’s there. It’s a clean and tidy package,” says Anetsberger. “Being fully integrated into the tractor, we’re able to offer all those standard machine control benefits, and package it in a very robust way.”

And because everything is installed at the factory by Komatsu, it is serviced by the Komatsu distribution network, as well. “When you purchase an iMC dozer, you’re purchasing a machine with a machine control system that is designed specifically for that dozer,” says Anetsberger. “This system is designed, developed [and] validated specifically for that model. Customers can be assured they’re going to get the utmost performance because of that.”

Introduced in early 2014, Topcon’s X-63i excavator indicate system (product information, 11299021) uses a combination of sensor and GNSS technology to provide operators with the position of their machine in relation to the job site. The system “automates” machine visibility for operators so they can focus on performing their job in an efficient manner, instead of worrying about being able to see where the machine is on the job site. All machine position information, and how it relates to the overall project design, is displayed directly in front of the operator on a touchscreen color display in the cab.

According to Kris Maas, Product Marketing Manager of 3D Machine Control at Topcon Positioning Systems (company information, 10056191), one reason the system was developed was to help eliminate the amount of time and money that was spent re-staking and re-surveying a job site due to the stakes used to mark the site getting knocked down throughout the work day. Safety for other workers on the job site was also a key factor for developing the system.

Three tilt sensors—mounted on the bucket, stick and boom—consistently measure the apparatus' angle, while a fourth sensor on the machine itself monitors the machine’s position and movement. The bucket sensor provides a reference of where the bucket teeth are in relation to the rest of the job site at all times, throughout each phase of the construction project. The operator always knows where the bucket is and therefore is better able to maneuver through the site without knocking over stakes, or other objects. Meanwhile, the machine sensor measures the pitch and roll of the excavator to inform the system of the machine’s position in relation to the final design of the project.

Machine positioning is also determined by the system’s two GPS antennas and GNSS receiver, which provide the elevation of the machine as well as its location in relation to the rest of the job site. Maas explains that having two GPS antennas enables the system to know not only the position of the machine but also in which direction it’s looking. “We always create a vector,” he says. “We calculate the factor between two positions, and that gives us a vector,” which allows the system to see where and how high the machine is positioned.

In addition to viewing the machine, stick, boom and bucket positions via the touchscreen display in the cab, operators can also enter the design parameters of the project, as well as create new designs on the spot if necessary. Maas says in order for the system to be accurate and effective, a 3D model of the project design must be entered into the system.

“With a 3D system they can work anywhere on a job site,” Maas continues. “They don’t have to go to a specific place where a surveyor has been and put stakes; they’re movable [around the job site] because they have the design on the machine,” and the capabilities to create a design when needed.

Having all of the machine-position information provided on the in-cab display also makes working on projects with minimal visibility—such as underwater work—easier. “They can always see what they are doing, even if it is not visible,” says Maas. “They can dig a trench even if they can’t see the trench.”

Whether they’re controlling dozer blades or continually monitoring machine position, automated systems can help make operators more efficient by either taking complete control over a task to ensure efficiency, or ease certain tasks—such as viewing a machine’s position within a worksite—so the operator can instead focus on more important tasks to ensure a project is completed in a safe and efficient manner.