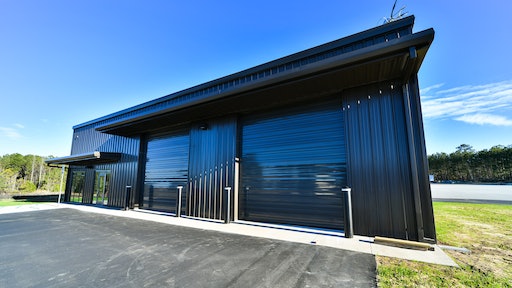 Auburn University announces it has opened the doors to its new autonomous vehicle research facility. It is located at Auburn's National Center for Asphalt Technology (NCAT) test track.

The new facility will help university researchers at the Samuel Ginn College of Engineering’s GPS and Vehicle Dynamics Laboratory (GAVLAB) who are frequently conducting their work outdoors. As such, the new facility features a garage with multiple bays and lifts for commercial and passenger vehicles. There is also office space for the researchers, a conference room and observation area which overlooks NCAT's 1.7 mi. (2.73 km) oval test track.

“The fact that we have our own test track where we can run autonomous vehicles and autonomous testing attached to this facility I think is an unbelievably unique asset,” said David Bevly, the Bill and Lana McNair Distinguished Professor of Mechanical Engineering and co-director of the GAVLAB, in the university's press release announcing the new research facility.

According to the university, the GAVLAB has built a strong reputation in autonomous vehicle navigation and developed a large portfolio of sponsored projects. These include those with the Department of Defense, the Federal Highway Administration as well as many private industry partners.

“Auburn is a major player in transportation engineering research in the nation,” said Steve Taylor, Associate Dean for Research at the university. “The GAVLAB and our other transportation engineering researchers have brought in nearly $50 million in sponsored research awards over the past 3 years. This new facility is an exciting development for Auburn, and there will be much more to come.”