The MOBA Xsite LINK excavator is being used for the "South-North water transfer project" which will help supply water to the growing population in China. 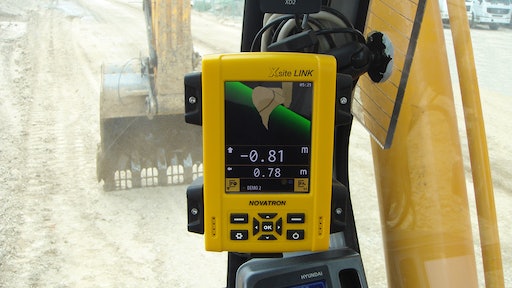 The excavator operator gets the bucket's position data at a glance – and always knows where to work.

Several billion cubic meters of earth will be moved and countless tons of concrete laid. The South-North water transfer is one of the largest infrastructure projects which has ever been realized in China. For the ambitious canal constructions, also MOBA’s excavator system Xsite LINK is in use.

The canal construction project was initiated by the Chinese government to deal with the scarcity of water in the northern part of the country. In Beijing alone, with its more than 20 million inhabitants, the groundwater level has sunk by around one and a half meters annually in the last few years. That means that it is getting harder and harder to supply the growing metropolis with sufficient water. Water transfer from the wet south to the dry northern Chinese plains, the so-called "South-North water transfer project," is meant to help remedy this situation. This construction project will include the building of new canals in three routes with a total length of several thousand kilometers.

The middle route, which will be more than 1,200 kilometers long, is the most important route and also the most difficult to build, since in addition to raising a dam, rivers have to be crossed and different types of rocks and soil exist here. The construction companies involved, Sinohydro Bureau 11 Co. Ltd and Military Police Hydroelectricity, are relying on technical support for the challenging earthworks: They equipped their excavators with the MOBA Xsite LINK excavator system, which makes the earthwork visible and measurable.  Because accurate preparatory work is particularly important under these difficult conditions so that the water will be able flow through the future canal and pipe system. "When constructing the canals, the correct slope must be maintained as early as in the earthwork stage, both when working on the river bed and on the embankments. That is why our excavators must work precisely. For this reason, we use the LINK excavator system; with it, you can see exactly how deep and at which incline work is done," says Zhang Gong, Section Chief of Sinohydro Bureau 11 Co. Ltd’s equipment department.

The sensors of the excavator system which are attached to the bucket, stick, boom and chassis, record the respective incline angle. They calculate the excavation depth, the incline and the range of the bucket.

Using arrow symbols, the LED display shows a view which indicates if more excavation work is necessary, or if the target level has already been achieved. The information from the sensors is immediately processed and represented in real-time as a profile or as a three-dimensional illustration on the panel in the vehicle cab. The numeric data indicating the deviation from the reference height which is also displayed shows how deep the excavator operator still has to excavate. "This is how we prevent errors and can deliver very good and precise work results, even with the most complex projects." When doing so, work must be done precisely down to the last millimeter. "Otherwise, if the specifications are not met, we have to make subsequent corrections. That can be expensive and costs a lot of money, and we may not be able to stick to the schedule," explains Gong. In addition to the costs for material, the operating expenses of the excavator would rise due to increasing fuel costs.

Since a large number of people and machines are involved in such a project, it is advantageous when the employees can be trained quickly. "With the system, I can help new excavator operators become qualified employees without a long training period," says Gong. "If, for example, the display shows at which depth the bucket is currently excavating, the operators can immediately see what still has to be done and how deep they have to excavate." Previously, the excavator operator had to constantly interrupt the work process, climb out of the cab and make manual measurements, or another worker had to measure the depth; now, the operator can work without interruption. "With this system, we work faster and much more productively. In the same amount of time, we can do about 30% more work," states Gong. The excavator also functions smoothly at night and underwater, since the bucket position is displayed accurately on the 7-inch display, which is also visible in the dark, and the sturdy sensors can be used for underwater work.

Since costs rise for every day a machine stands idle at a construction site, it is important for the construction company that the machine is always available – there's no time for tedious installation and set-up work. "But that was no problem with this system; it is incredibly easy to install and operate," explains Gong, who is very happy with the performance and features of the system. With the system, the tasks can be fulfilled efficiently.

After completion, up to around 45 billion cubic meters of water are to be diverted annually through the new canals.

This analyst report discusses how using predictive performance engineering, OEMs will be able to turn complexity into a competitive advantage.
June 1, 2022
Latest