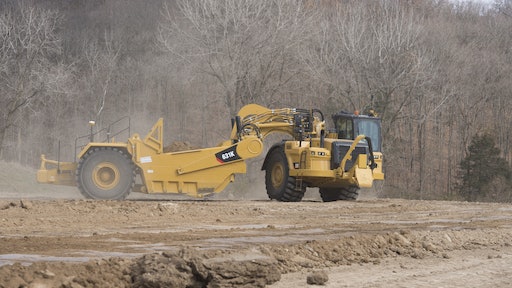 Redesign of 630K Series models also includes a number of features developed for other Cat K Series models: the Advanced Cushion Hitch uses new software to dampen end-of-stroke movement of the load cylinder for a smoother ride; hydraulic-system refinement simplifies the bowl quick-drop function; and draft-arm-overflow guards divert material away from the sides of the bowl.

Engine over-speed protection automatically senses engine-over-speed conditions, based on the rate of acceleration, and applies the compression brake or service brakes with no operator input.

Tire-Spin Reduction automatically controls the slip of the tractor tires.

Differential-Lock-Engagement Protection prevents the operator from engaging the differential lock when damage could occur.

Machine-Speed Limiter is used if site conditions require limiting machine speed for long intervals. The operator can select the top speed through the display, or top speed can be set through the Cat Electronic Technician. The system allows the machine to select the gear that works most efficiently for the load on the engine and transmission, typically resulting in a lower engine load factor and lower fuel burn, compared with selecting a top gear that requires the engine to operate at high-idle speeds.

Ground-Speed Control is used when top speed must be limited in short segments of the haul or for intermediate periods of time. The operator can set the desired top speed, and the machine selects the appropriate gear for conditions.

Sequence Assist is an available system that uses cylinder-position sensors to automate bowl functions, eliminating up to 14 manual commands in each cycle segment—load, haul, dump and return—including control of the cushion hitch, transmission-hold feature and ejector.

Load Assist, an optional feature, is designed to help less-experienced operators achieve fast, consistent loads. Based on the speed of the machine, the system automatically adjusts cutting-edge height in order to manage wheel slip and to ensure consistent loading cycles.

Payload Estimator is another available system that calculates machine payload (in tonnes or tons) by measuring bowl-lift-cylinder pressure at the start of the haul segment. The system works most effectively when using Sequence Assist and achieves more than 95% accuracy (based on testing), compared with actual scale weights. Payload Estimator is included with the Sequence Assist system.

Cat Grade Control, when selected, "intelligently" controls the loading cycle to ensure that the machine does not cut below grade nor over fill in dump area, thus avoiding excess material movement and rework.