The KAMAG E-Wiesel AGV can be automatically loaded and unloaded with up to 30 tonnes of weight, providing efficient transport of materials across a manufacturing campus. 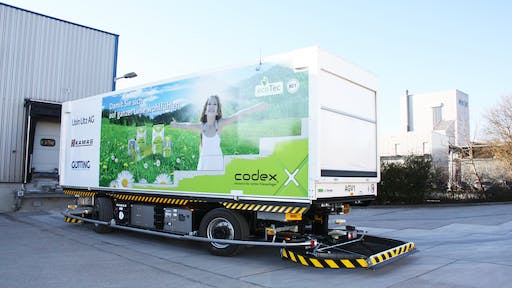 As early as 2002, Ulmer Uzin Utz AG placed its first autonomous truck into service. The diesel-powered vehicles resembled standard trucks and, with their empty driver's cabs and steering wheels being turned as if by magic, ensured a great deal of astonishment. Now the vehicles have been replaced by the innovative KAMAG E-Wiesel AGV which can loaded and unloaded fully automatically with up to 30 tonnes of pallets. In addition to new control technology for driverless crossover traffic, the design concept of the electrically-driven vehicle was also completely changed. “The E-Wiesel AGV can be loaded from both sides and also does away [with] a driver's cab,” says Peter Brenner, Area Sales Manager of KAMAG's parent company, Transport Industry International Sales GmbH & Co. KG. "The electric drive and the entire control technology supplied by our partner, Götting, are installed between the axles under the box body. In addition, the transporter are thus loaded and unloaded from the rear and front while previous trucks had to make perhaps several turning maneuvers "

At Uzin Utz AG, two E-Wiesel AGVs connect two production sites with the central warehouse. Tobias Braun, who is responsible for the ongoing operations of the E-Wiesel AGVs at Uzin Utz AG, explains why the fully automatic vehicles were given preference over other systems by the Ulm-based full-range supplier of floorings: "With the E-Wiesel AGV, we ensure complete flexibility in our production processes and do not block our premises through the use of inflexible and bulky roller conveyor systems. Compared to transportation with conventional forklift trucks, the autonomous E-Wiesel AGV is much safer and less expensive. Furthermore, the new electric drive perfectly suits our sustainability strategy – for us, a sustainable product must be linked to sustainable production."

At the Ulm factory of Uzin Utz AG, around 200 m separates production and the warehouse. Previously, palletized products such as tile cement or tiling mortar were transported by truck, requiring up to 50 journeys a day at walking speed - strenuous and monotonous work that needed constant staffing. Today, the KAMAG E-Wiesel AGV is used in the on-site crossover traffic operations. If any pedestrians or cars get in the way, the E-Wiesel AGV stops automatically and then continues its journey when the route is free again. Redundant systems - laser scanners and mechanical "bumpers" - guarantee a high level of safety. Even the previous models of the E-Wiesel AGV did not cause a single accident in their 15 years of service.