Yanmar is collaborating with 10 industry partners to develop a modular robotic platform that employs the latest information communications technology to examine crops and soils. 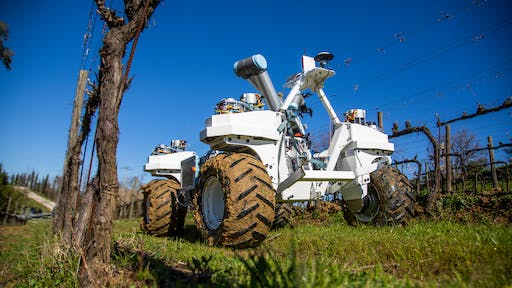 Agriculture in the future will see increasing use of scientifically precise farming techniques, where automated ‘agro-bots’ monitor, treat and work the land, using advanced technology designed to help maximize yields and minimize disease. With its extensive experience in automation and agricultural mechanization, Yanmar is now showing the way in advanced field robotics research.

Time for change in our changing times?

It’s hard to think of a more important economic sector than agriculture. This is an industry that directly affects the lives of everyone the world over, despite being beset by challenges from all sides. Changes in temperature and precipitation are influencing crop yields; farmers and agricultural workers are directly exposed to the effects of weather extremes, while millions more in food-related jobs are already feeling the impact of our changing climate.

Furthermore, consumers today are increasingly aware of the issue of chemicals used in producing their food and demand sustainable production of ever tastier, higher quality produce. Finding the best way to deal with these issues and while meeting environmental pressures is causing many governments to turn to automation specialists and technology experts to try and improve the lot of the farmer, meet consumer demands, and tackle the myriad challenges confronting the industry.

Increased automation and technology within agriculture is nothing new in itself of course – in fact, it’s been happening ever since the Industrial Revolution. But what is new is how technology is being used to tackle problems related to food disease control and unstable weather patterns. The focus is now on achieving desired yields in an environmentally sustainable way, with a continuous focus on reducing the amount and type of chemicals used.

Drought, flooding and the appearance of new pests and diseases are, however, now a threat on all continents. Even Europe faces a challenge right across its farming systems. This is especially true of countries such as Italy, which faced a 57% plunge in its 2018 olive harvest – the worst in 25 years – as a result of climate change, according to scientists.

With its European research facility nestled in the hills above Florence, Italy, Yanmar R&D Europe (YRE) is well placed to focus on a variety of field-based studies to bring added value to the agriculture industry – and possibly even attract a new generation of workers to the land. These include the 2-year, four-million Euros ‘SMASH’ project being carried out in cooperation with 10 technology partners to develop a mobile agricultural ‘eco-system’ to monitor, analyze and manage agricultural crops.

The acronym stands for ‘Smart Machine for Agricultural Solutions Hightech’, and this project was co-financed by the Tuscany local government. It consists of the development of a modular robotic platform that employs the latest information communications technology to examine crops and soils, analyze gathered information and provide clear, actionable information to farmers to support crop management. 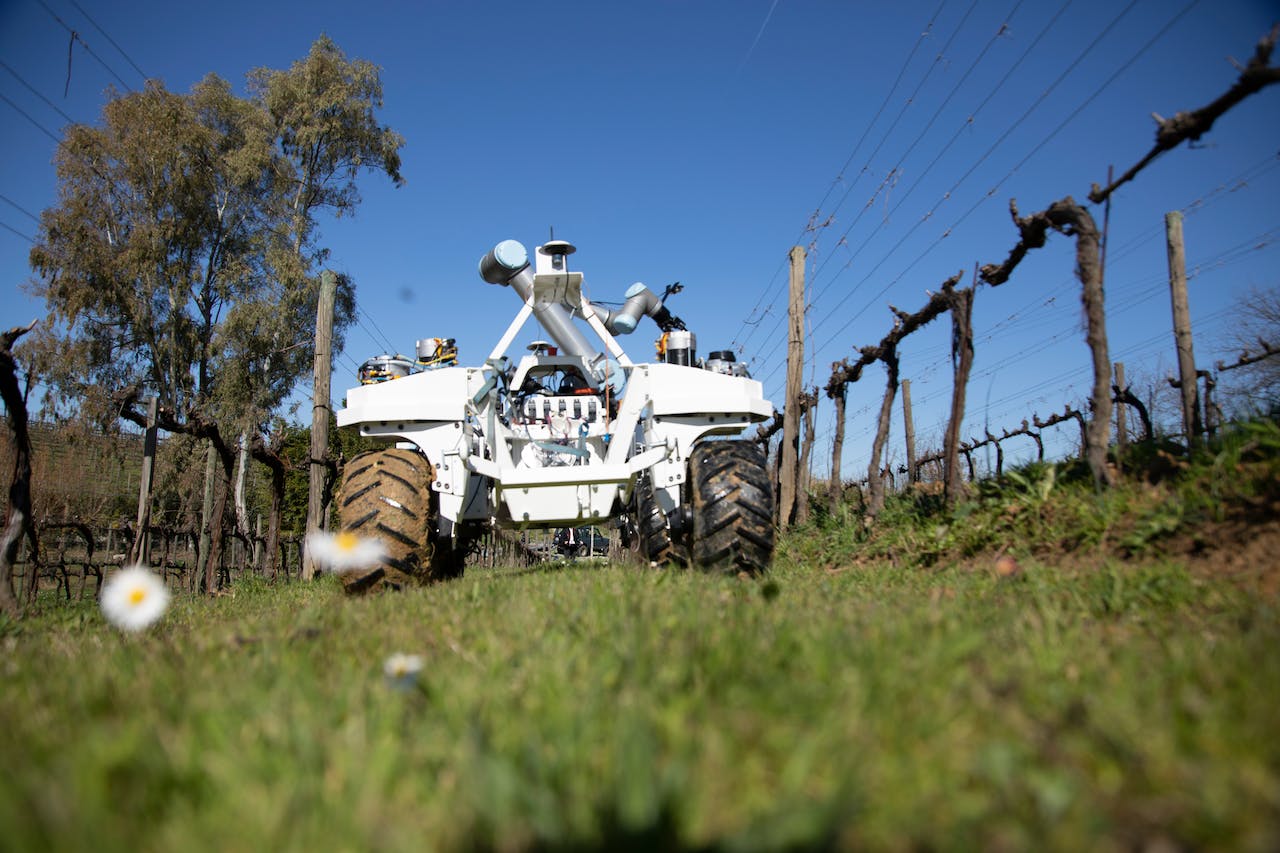 One of Yanmar’s many roles was to develop control systems for the multipurpose robotic arm for mobile manipulation (including precision spraying), sensor integration for positioning technologies, and autonomous navigation and software development for the control of the system’s mobile base (in collaboration with other partners).

For YRE’s Modelling and Control Engineer Manuel Pencelli, developing a prototype agro-bot that could be used to monitor and control crops, take soil samples for analysis and accurately target agricultural chemicals for precision application, required many different areas of expertise from the beginning of the project.

“There have been many partners involved throughout. We needed mechanical expertise for developing the structure of the vehicle, and many ‘communications’ experts because we have a lot of devices that need to ‘talk’ to each other. Our starting point was in fact a tracked vehicle that was originally built for moving along a beach and cleaning the shoreline!”

There are two working SMASH prototypes – one for grapevines and the other for spinach – to cover the two different types of crops that were originally slated for research. The former has already undergone significant testing at a vineyard farm in the Pisa province, where Manuel has been instrumental in demonstrating the possibilities that this robotic ecosystem could offer farmers.

“SMASH is not a single machine, but a series of different devices including a robot, base station, drones and field sensors that together provide vital information to help farmers. A farmer could program the task that he wants SMASH to carry out, and while he is involved in other activities, this machine could move autonomously, monitoring crops, detecting and treating diseases, and saving the farmer or his workers significant time out in the fields manually checking crops.”

Mapping and monitoring, weeding and feeding

SMASH consists of a mobile base, a robotic arm featuring manipulators and vision systems, a drone and an ancillary ground station. Imagine a system that is designed to function across a range of precision agriculture technologies, offering specific insights on geomatics, robotics, data mining, machine learning etc, while taking into account the environmental and social issues facing farmers.

For Manuel, the possibilities for SMASH are endless: “In addition to all the functions that can be performed by the robotic arm, we also have some attachments that can be mounted on the back of the vehicle for mechanical weeding, or working the soil, as it moves. This work can be done simultaneously, together with the monitoring and detection.”

Yanmar’s expertise has been in the software development for the agro-bot and the integration and installation of all of the other parties’ components. It’s a complicated mass of electronics, with wires, sensors, cameras, GPS receivers, and multiple electric motors (eight of them!) competing for space. But it all works – even on a muddy vineyard in late February where the independent steering system and superior traction is demonstrated on a variety of terrain.

“The sensor fusion was one of the most challenging aspects of this project,” adds Manuel. “Because we have a very particular environment within fields, where a number of variables can change, such as the infrastructure, soil, shape of the fields and even other workers moving around the agro-bot. So, the localisation of the vehicle, improving the robustness of it and understanding its physical constraints were interesting – such as speed, steering angle, the positioning of, and communication between the mounted on-board devices – all these aspects can affect the motion of the vehicle.”

For the SMASH project, the university’s Professor Marco Vieri believed that a holistic approach to research was needed, alongside enabling the latest technologies: “Farming provides food, feed, fibre and fuel for humans, but we also have to consider rural, cultural and historical issues.

“In the past, there was a yearly calendar of agricultural operations, but a new mindset is required these days that allows us to control and mitigate risks such as drought, pests and flooding. We needed to explore increased automation not only to enhance and increase the amount of product, but also to apply an added value.

“Yanmar shares our vision to help farmers realize healthy, high-value production with a true technological system, so our part in SMASH has been to develop equipment and effectors for the two scenarios of vineyards and horticultural field crops like spinach. We have extensive knowledge of farm machinery and new technological possibilities, so it’s about helping reduce the use of pesticides that are not safe for the micro-organisms of the soil and plants, while increasing the level of nutrients and useful bacteria.”

It’s fair to say that farmers are on the front line of the debates surrounding climate, emissions and sustainability. Even when it comes to high-value crops such as the grapes, olives and nuts found in this region of Italy, it’s hard to argue against using automated and connected agriculture to bring scientific data and farmers’ needs together. After all, robots can work 24 hours a day, they have less impact on the soil than tractors due to their smaller size. 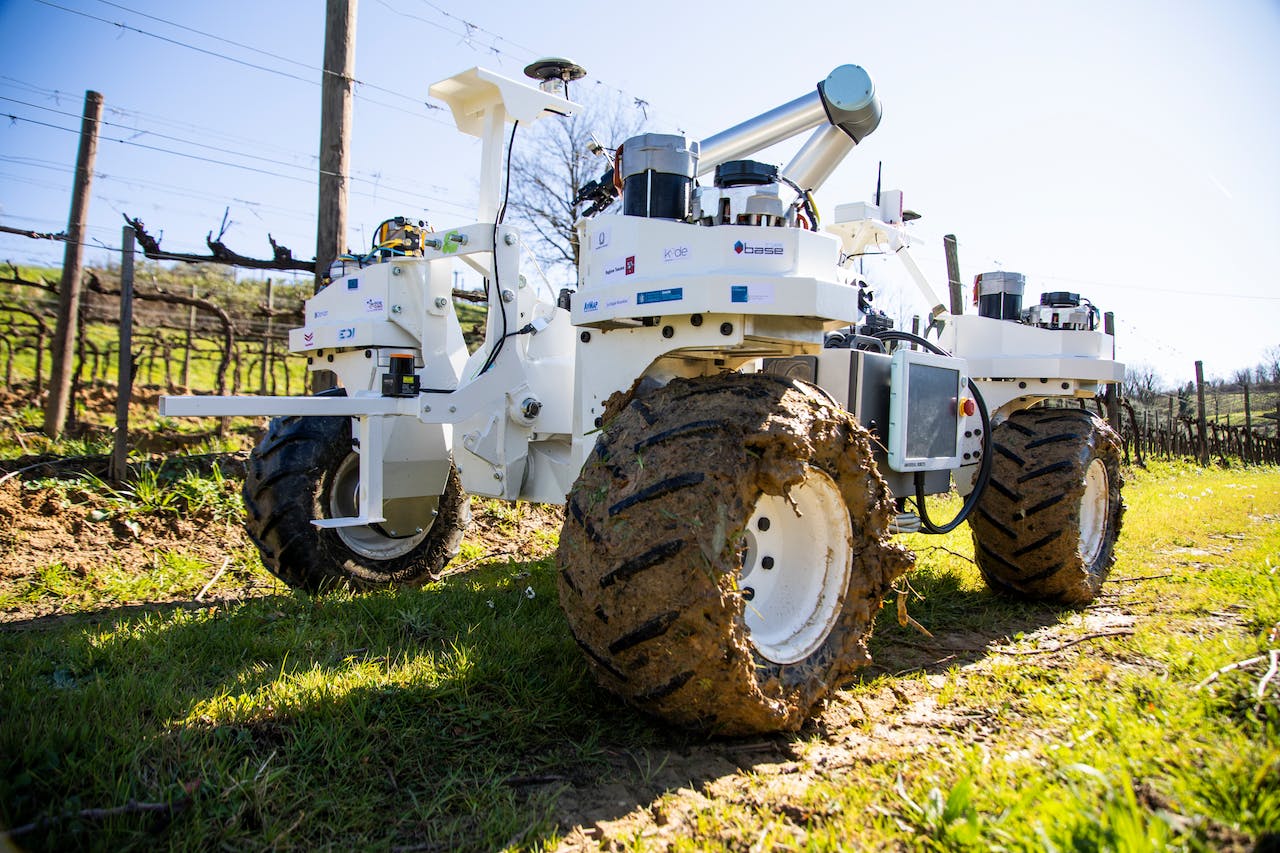 Imagine a fleet of robots a fraction of the size of a conventional tractor and it’s easy to see the possibilities that AI-based, technology-driven precision farming can offer in the coming years. The use of drones to map fields and check crops; and agro-bots to harvest fruit, sow seeds, identify and treat weeds with exact doses of pesticide and fertilizer – it’s all about targeting efforts only in areas that need work, which allows for a reduction in labour, capital costs and emissions as a result.

With its ongoing research into advanced agricultural robotics, Yanmar is taking on the challenge of showing the possibilities and potential benefits of increased precision farming techniques in the future. Whether automated and robot tractors working the fields will become a familiar sight remains to be seen, but it’s hard to argue against using technology to sustainably increase quality and yields from the land.

And if the sound of drones hovering over crops means that farmers are able to identify growth patterns and nutrient needs, and then deliver pesticides and fertilizers with pin-point accuracy with a fleet of robots, then surely that will be a welcome addition to the tools currently used in our fields.

Other partners involved in the SMASH project include:

Will Robots Take Over the Farm?