Will Robots Take Over the Farm?

Continued investment in more efficient and environmentally friendly farming practices is producing a new wave of in-the-field solutions, including robots. 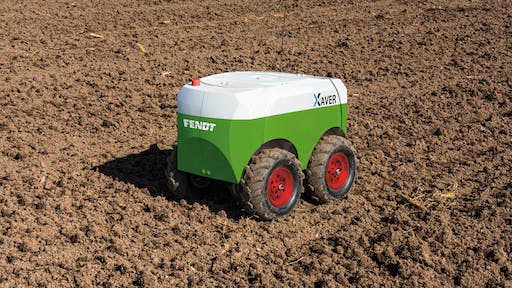 A Fendt Xaver field swarm robot shown in the field.

Until the world population ceases to grow and resources stop being scarce, there will always be a need for farming to be more productive and efficient. Intelligent farming and automation have since become the solution, but there are more hurdles to consider down the line.

Vehicle concepts are now being investigated and developed to reduce the dependency on fossil fuels while continuing to increase sustainability and improve productivity. Several countries around the world are starting to discuss banning diesel engines used in automobiles in major cities. Norway is suggesting as soon as 2025, while others like France, Great Britain and China are discussing 2040 as a deadline.

John Deere’s goal to develop a fully electric agricultural machine to enable carbon-neutral agricultural production started in 2013 with the launch of its multifuel tractor concept that could be powered with pure vegetable oil as well as diesel. In 2015, the company launched its Battery Boost Tractor concept, a hybrid tractor with battery power.

The SESAM Tractor uses 100% renewable electricity for its 130 kW of continuous power while still using a standard tractor frame to house the battery-electric drivetrain. The use of battery power (totaling 108 kWh) allows a driver to run auxiliary functions like air conditioning, as well as implements while the tractor is off, and recuperates some of its energy during deceleration (regenerative braking). The battery powers two 130 kW electric motors, one of which can be used for regenerating power back into the battery. 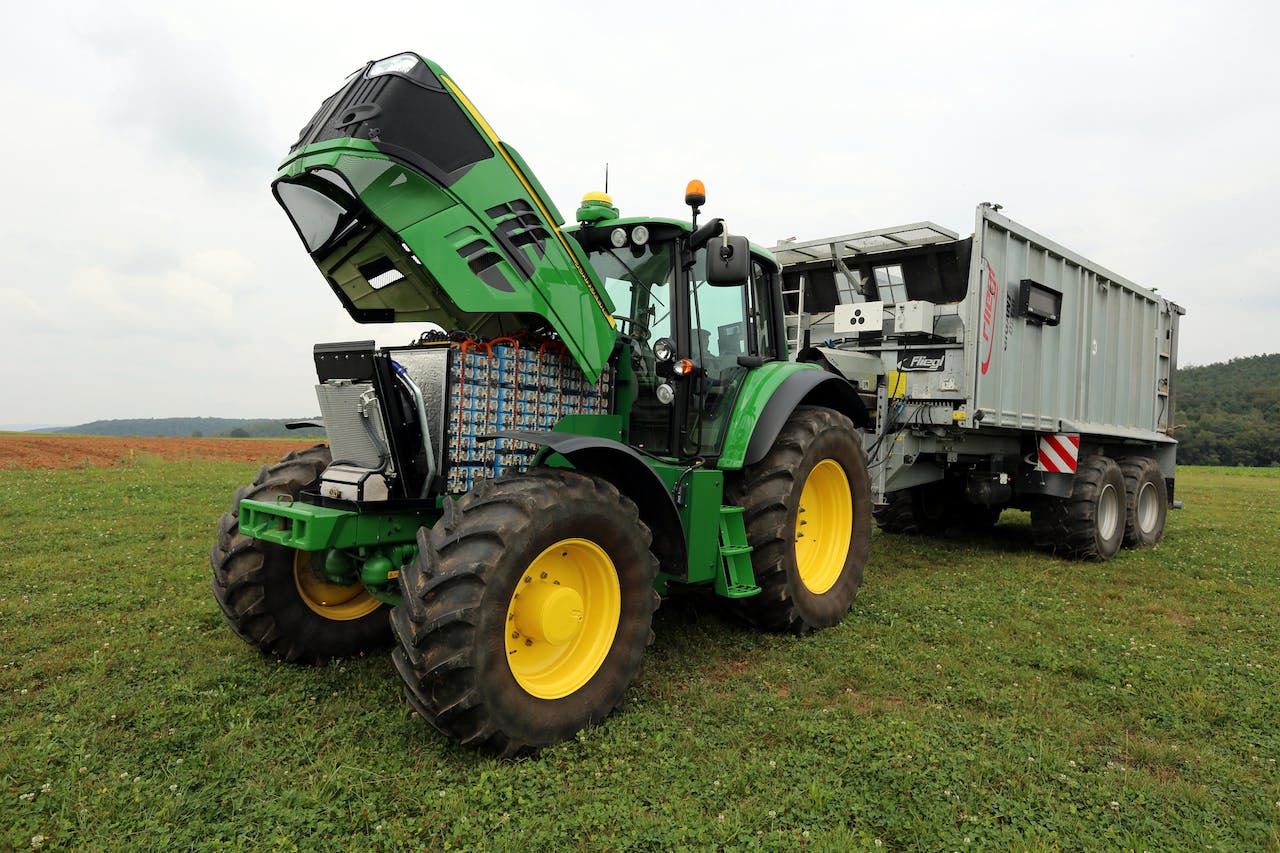 “However, with the current state of battery technology, the SESAM tractor is only able to be used for approximately 4 hours of mixed mode operation like we see in Europe with on-road transportation and small field work,” explains Lehmann. “After 4 hours, an operator would need to spend another 3 hours to fully charge the tractor battery. That limits the use of this tractor with respect to time, but we wanted to make sure to be on track [with current technology options] and have the technology in our portfolio.”

The next step in the evolution of John Deere’s clean energy agricultural tractor projects was an all-electric, fully autonomous, grid-powered tractor that was continuously and physically connected to a power source such as a generator or the power grid itself—whether electricity, solar, wind or biogas powered. The publicly funded project was started in 2014. In 2017, the team finalized the design and began field testing.

The project’s funding concluded at the end of 2017, and by early 2018 the team will present its findings to the consortium of universities, government officials and manufacturers to see if the project should get continued funding for further development.

The details of the vehicle’s connectivity system are not yet publicly released; however, the system is able to transfer 300 kW of power, significantly more than can be contained in today’s current battery systems. A 150 kW motor driving the traction and additional 200 kW motor driving the implement. 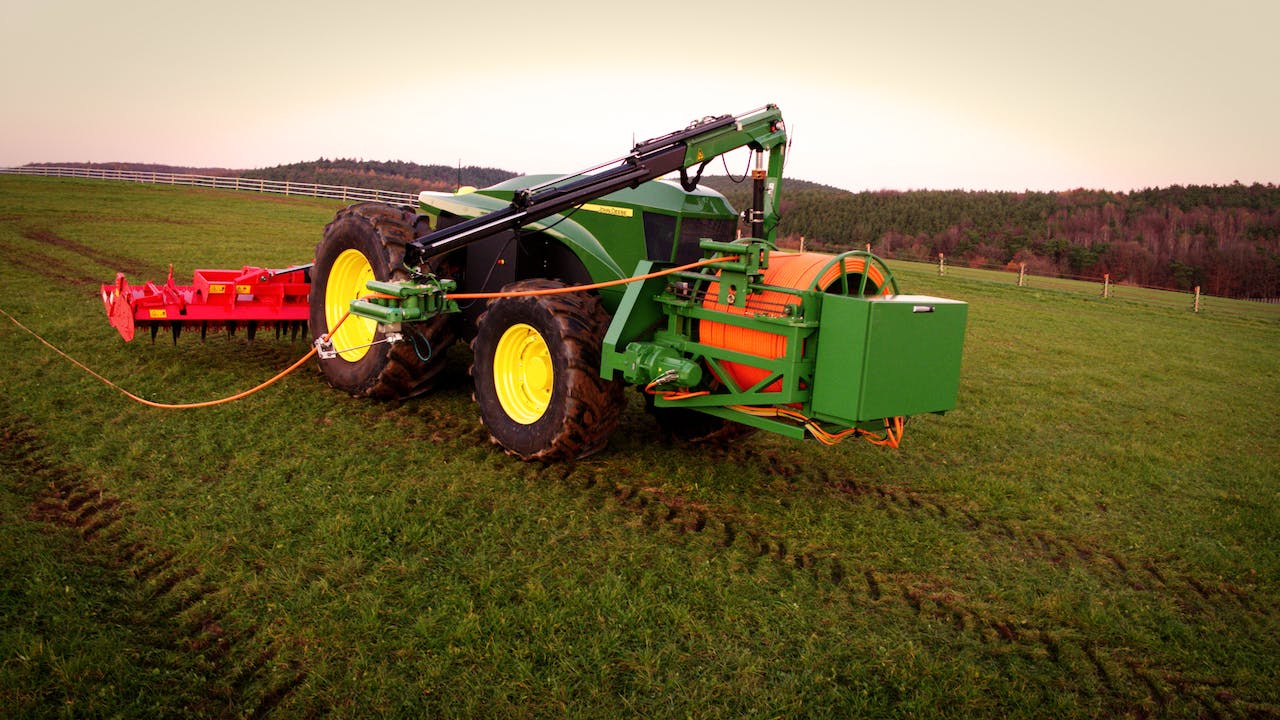 “With the conclusion of the project, we now have an all-electric, fully autonomous tractor which can run without any cab, and truly without supervision, though we have sensors onboard for safety,” says Lehmann. “The idea is to increase the power density and reduce the machine cost. In order to do that, we removed all of the tractor parts that are no longer necessary—the cab, the engine, all of the auxiliaries that come with the engine like the fuel tank, and then the entire front axle of the tractor.

“What you are left with is the essential components of a tractor that include a rear axle, hydraulics, PTO and a hitch. Then, we are adding a specially designed gearbox to attach two high performance electric motors, one for traction and one for the hydraulics and PTO. Both motors are rated to 250 kW of power, so the single axle tractor has as much power as a large row crop tractor.

“Once we add a few of these autonomous tractors in a row, we have essentially built a field swarm,” Lehmann concludes. According to Dr. Nicolai Tarasinski, Manager of Advanced Engineering at John Deere, besides the technical feasibility, the competitiveness and profitability of the swarm concept still needs to be proven. Also, for the solution to be commercially viable, let alone accepted by customers, parts of the underlying technology like sensors that allow for autonomous driving would have to come down in cost before large-scale use would be considered.

“The usability of a swarm concept not so much depends on the size of the farm but it depends on the size, the uniformity and the conditions of the fields,” says Tarasinski. “Ideal conditions can be found in regions where irrigation is needed, as those fields are typically same size, levelled and regularly shaped. Swarm technology together with irrigation potentially enables farming in regions like desert areas, with the benefit that infrastructure and fields could be planned ‘swarm-ready.’ Solar panels near the fields could provide electricity to power the swarm.”

In 2014, AGCO’s Fendt brand launched its MARS project (Mobile Agricultural Robot Swarms) in an EU-funded research project in collaboration with the Ulm University of Applied Sciences to develop a robotic system for high-precision planting. After the project was completed, AGCO and Fendt decided to continue to develop its MARS robot project under the Fendt brand. The swarm robots and cloud-based system controls is now referenced under the product name XAVER.

According to a press release released by Fendt, the Xaver system uses the small robots—operating in a swarm—along with cloud-based communication to plan, monitor and record the precise position and planting time of each corn seed. Knowing the exact seed location and planting time provides potential for the remaining field operations, such as fertilizing, to be unique to each independent plant throughout the growth and harvest cycles of the crop. 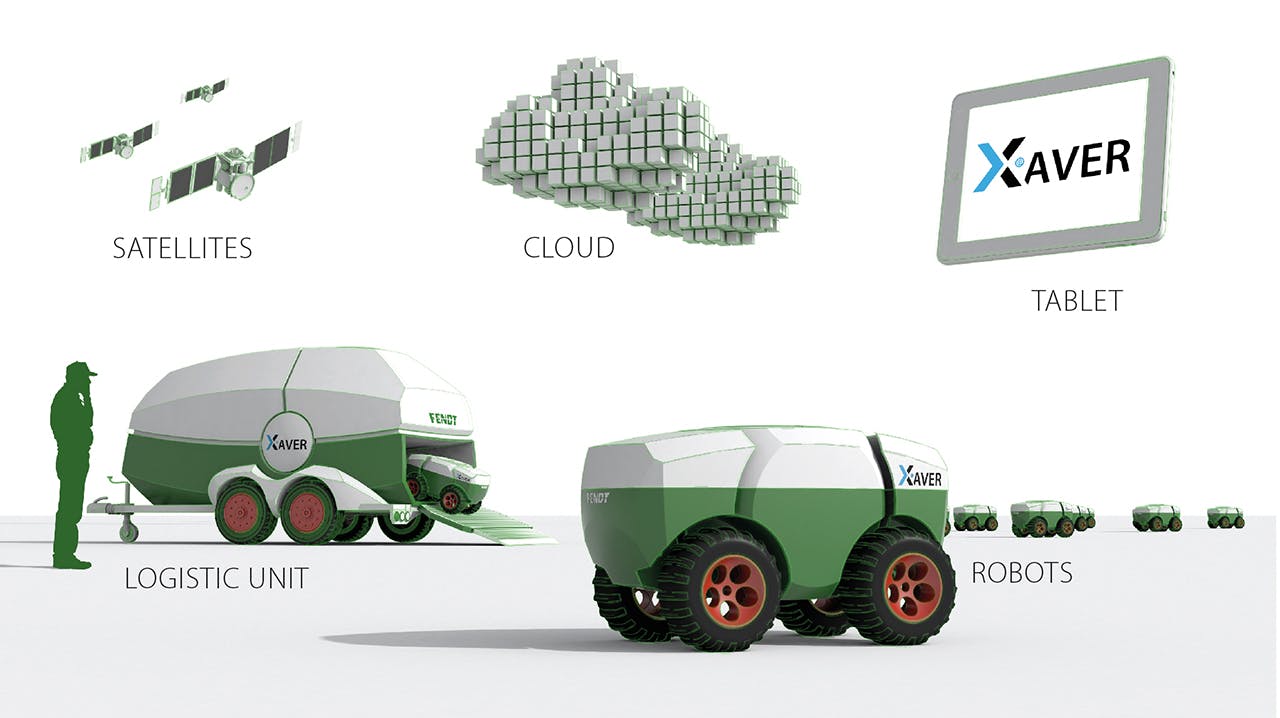 Satellite navigation and data management within the cloud system allows field operations to be ongoing 24/7 with constant access to up-to-date data. But beyond simple data accessibility is the ability to manage the fleet of deployed robots from the planning stage. The OptiVisor algorithm used in the Xaver app plans the field for seeds, patterns and density based on the entered parameters and is able to optimize the paths for all of the robotic units involved for the allotted time required to complete the job. 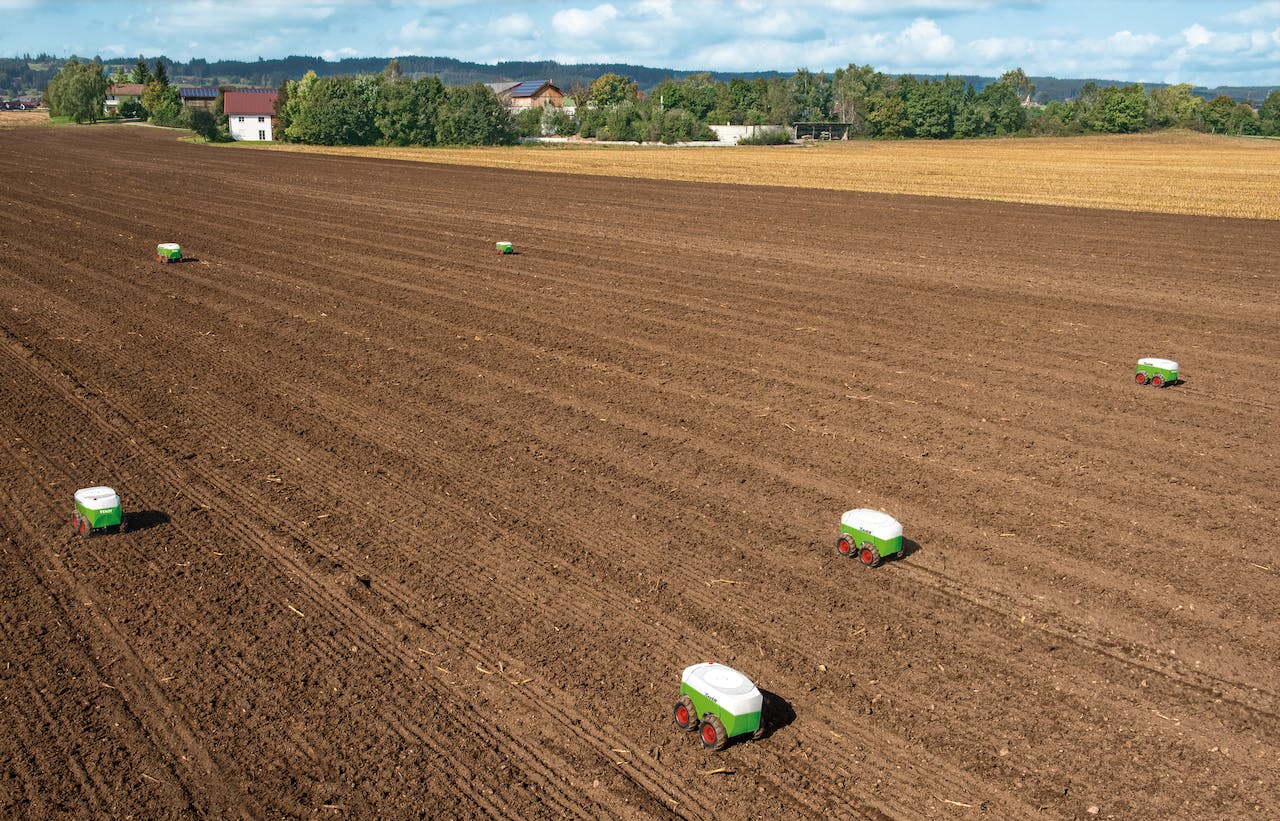 Overhead shot of several Fendt Xaver swarm robot units in the field.A complete Xaver system consists of approximately a dozen units and can cover an estimated 1 hectare per hour. If a robot were to fail in the field, Fendt notes that the paths of all of the remaining swarm units are automatically re-optimized.

According to Fendt’s findings, the robots need around 70% less energy to do the same amount of work as conventional agricultural machines, and subsequently produce less CO2. The battery-operated and 400 W electric motor driven Xaver robots weigh only 50 kg each for significant ground pressure reduction to the point of almost being negligible—approximately 200 g/cm2. 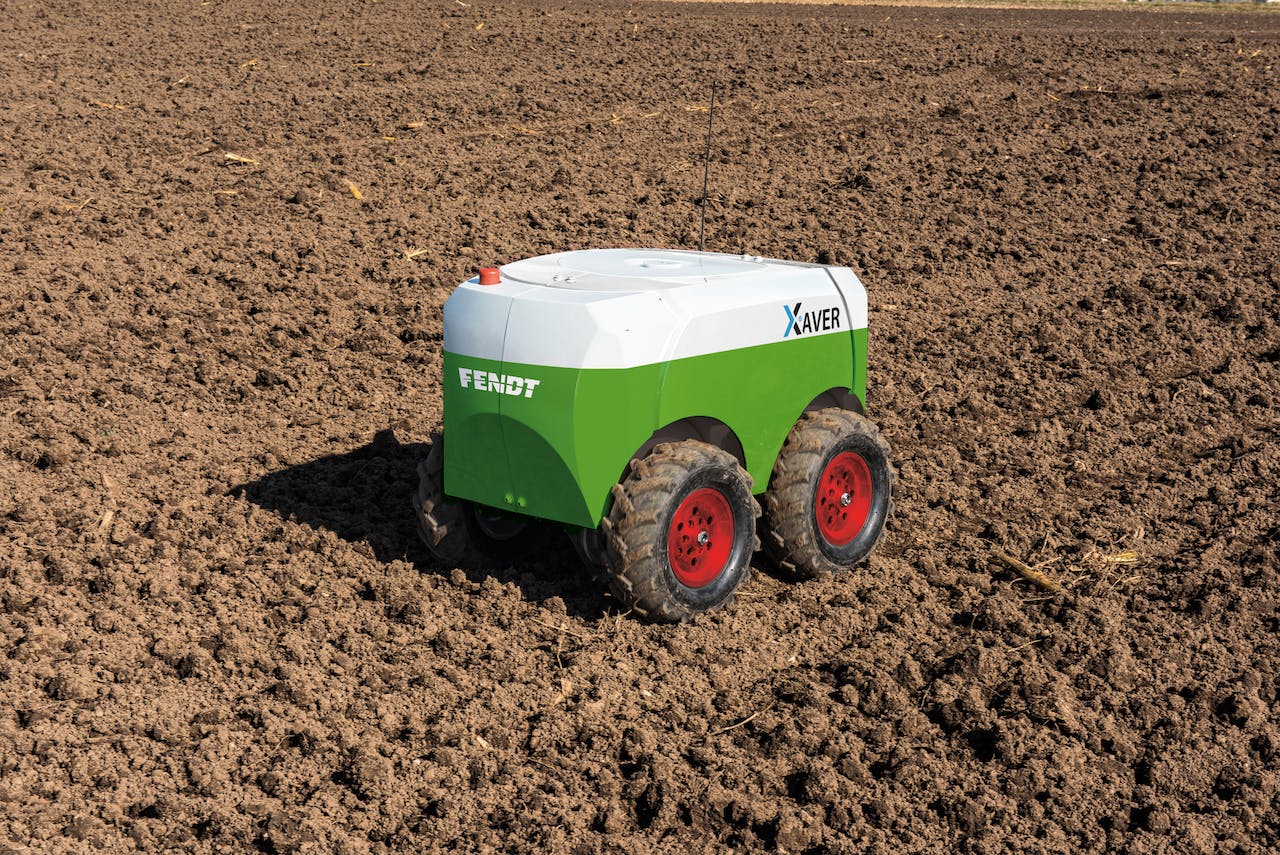 A Fendt Xaver field swarm robot shown in the field.The additional benefits beyond reduced ground pressure and emissions reduction to implementing a successful field swarm, according to John Deere’s Tarasinski, are vast and include: higher productivity due to the increased number of units working in the field; a higher quality of work from precise and repeatable operation; the complete elimination of human fatigue; lower cost of daily operation; and the significantly reduced risk of operator injury.

John Deere and Fendt’s swarm concepts are just one of several potential solutions that manufacturers of agricultural equipment are researching in order to solve the continued pressure produce more to feed a growing population while using fewer resources with a safer and cleaner operational process.