The battery-electric Xcelsior AV is a Level 4 autonomous transit bus which is set to undergo testing in real transit operations with the Connecticut Department of Transportation. 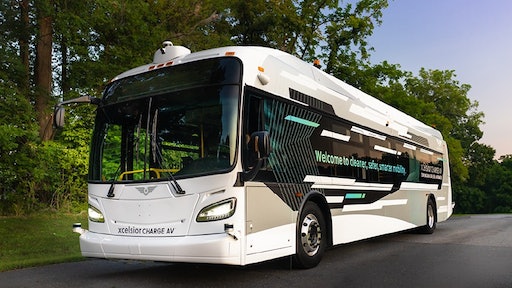 New Flyer of America Inc., a subsidiary of NFI Group Inc. (NFI) has unveiled its Level 4 autonomous transit bus, Xcelsior AV. The bus was developed in collaboration with Robotic Research LLC which the company formed a partnership with in May 2019.

New Flyer states in its press release announcing the new bus that there are two main technologies which enable Xcelsior AV to operate autonomously. One is Robotic Research's self-driving technology called AutoDrive which the company says is "the eyes and brain" of the autonomous system as it processes the world surrounding the bus. This includes mapping the environment, making driving decisions and navigation.

Robotic Research’s AutoDrive ByWire (drive-by-wire system) is the other key technology. Considered the "hands and feet" of the transit bus, it controls most of the bus' movements including steering, braking and throttle.

"Our Xcelsior AV represents the anticipated future of safety in public transit and the latest leap forward for New Flyer. We committed to building an automated transit bus and within 5 years, we’ve delivered an industry-changing vehicle. The technology is real and it’s here,” said Chris Stoddart, President, New Flyer and MCI, in New Flyer's press release announcing the new bus. "In the future, we expect fleets of automated buses to improve road safety and with the potential to shorten commute times, increase energy efficiency, and reduce congestion. As standards and regulations are developed and implemented and automated buses are deployed across North America, we expect our Xcelsior AV to enable meaningful improvements in the public transit user experience, which will hopefully lead to increased ridership. Together with Robotic Research, we are leading clean, accessible, reliable mobility that’s safer for all."

"Autonomous technology is not only expected to increase the safety of transit, but is also anticipated to increase the throughput and utilization of vehicles. Automated buses have the  potential to improve traffic patterns and reduce stop-and-go traffic, benefiting not only the users of mass transportation, but the whole infrastructure," said Alberto Lacaze, President of Robotic Research, in the New Flyer press release. "New Flyer just introduced the missing piece of a fully integrated, smart transportation solution. This vehicle unlocks a new era of Transportation as a Service, leveraging technological advancements across industries to create a safer, cleaner, more efficient, and more accessible transportation solution for the public."

New Flyer says the bus is being readied for service in North America with testing starting as early as 2022. Testing will be conducted in a program with Connecticut's Department of Transportation (CTDOT). The company says a human driver will remain at the wheel of the bus as a safety precaution.

CTDOT and New Flyer first announced their intent to test autonomous buses in 2020. The aim is to demonstrate the feasibility of using autonomous vehicles on public roadways and for public transit.

Stoddart said in an article from Forbes the fixed routes and low travel speeds of buses suit the use of autonomous technology. This is similar to the mining industry, which has been utilizing various forms of autonomous systems for over a decade now.

New Flyer says its new autonomous bus helps to further the Federal Transit Administration's (FTA) Strategic Transit Automation Research Plan which aims to evaluate the possibilities as well as risks associated with implementing autonomous transit buses. The testing project with CTDOT is funded by the FTA's Integrated Mobility Innovation initiative, and will help FTA with its evaluation of these autonomous vehicles.

The National Highway Traffic Safety Administration says there are many possible benefits to autonomous vehicles (AV) like the Xcelsior AV which include: