Telematics head to the front

As the use of telematics grows, OEMs are realizing the value of developing and integrating these systems earlier in the design process. 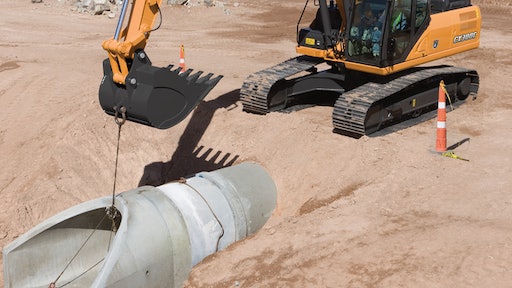 Case CE considerds telematics systems during the early stages of the design process because it increases the company's ability to capture data and use it in a useful manner.

Over the last decade, the telematics—also known as machine to machine (M2M)—industry has grown not only in use but also in capabilities, and continues to do so. According to Michael Geffroy, Vice President of Sales and Marketing at Quake Global Inc. (company information, 11282531), San Diego, CA, it continues to grow 25 to 40% year over year depending on the industry sector. The heavy equipment sector, he adds, is one of the fastest growing. “When you look at the overall market, the bigger companies have made quite a bit of progress, but the Tier 2 companies haven’t, and that’s still a significant portion of the market,” he says.

When the concept of telematics first began to emerge in 2000, it was focused more on providing benefits to the end user and was limited in the type of information it could deliver. Initially only able to provide vehicle tracking and engine hour information, among a few other features, telematics technology has evolved to the point where a continuous stream of information is transmitted, including everything from hour-to-hour operational data to locating vehicles around the globe.

As these systems have progressed, the benefits are no longer just for the end user of the equipment. OEMs and dealers are also able to get valuable information from the systems, which can help them evaluate and improve their designs, or better assist and prepare for maintenance needs.

“There’s just been enormous evolution,” says Geffroy, “and I think today every OEM, whether it’s a big guy [or one] of the smaller companies, they’re all seeing [the benefits] now, more than ever.” He adds that for many companies, telematics systems have become just as essential to their product offerings as the engine.

Consideration of the design and implementation of a telematics system within the overall equipment design process varies from company to company. However, Geffroy notes that considering it earlier in the design process can ensure a more beneficial solution is developed. “When we’re able to get in early we’re able to influence them and get them thinking on a higher level with regards to the potential benefits of such a solution,” he says.

Purdie says early design integration provides OEMs a broader field of monitoring opportunities, such as monitoring OEM-proprietary metrics apart from end user data. This enables ORBCOMM to filter data messages, separating OEM-proprietary data from customer data, and directly providing customers with only the information that is relevant to them.

Brad Stemper, Solutions Marketing Manager at Case Construction Equipment (Case CE, company information, 10250911), Racine, WI, says Case CE considers telematics integration in the early stages of development because it comes standard on several of its machines. And as the company continues to upgrade its equipment lines and integrate Tier 4 Final systems, he says telematics will be considered from step one of the design process because of the amount of information it can provide the customer about health, productivity and security. “If it is built organically into the system from the first concept, it increases our ability to capture that data and communicate it in a meaningful and actionable way to the customer.”

While there are some OEMs who prefer to take on the development of telematics systems themselves, many find it more worth their time and money to partner with a telematics supplier like ORBCOMM or Quake Global.

Quake Global, for instance, is able to provide an entire telematics system—everything from the hardware to the middleware (which connects the system to satellite and terrestrial networks)—and work with an OEM to implement it into a vehicle design. Geffroy says Quake Global offers standard platforms that are highly flexible, so the platform can be customized to the OEM’s needs and allow the OEM to differentiate itself from its competitors. The company will also work with an OEM to develop a completely new, customized solution from scratch.

A further benefit Quake Global offers is the integration of RFID technology into its telematics solution which helps increase visibility to critical resources and assets surrounding a piece of equipment, such as identifying people or peripheral equipment on the jobsite.

ORBCOMM has been working with Doosan Infracore for over a year to develop a new, expanded telematics system which will be integrated into Doosan equipment (learn more, 11142310). Set to be released in the Spring of 2014, the two companies have been working together closely to develop an end-to-end systems solution which will expand end users’ view on equipment performance through a web-based analytics platform. ORBCOMM’s solution will provide global satellite data service through its network, as well as cellular connectivity through ORBCOMM’s wireless partners.

“As wireless network coverage and bandwidth increases, ORBCOMM's telematics solutions will have the capability of further evolving into real-time, remote machine diagnostics, a tool that can benefit end users, dealers and the OEMs by minimizing machine downtime and service technician time,” says Purdie.

Case CE is one of a handful of OEMs that has chosen to take on the development of its own telematics solution. “By developing it as an OEM, we can make sure that our systems are optimized in a way that makes the collection and communication of that data as easy as possible,” says Stemper. “We can also refine the science of ‘how’ to capture that data from varying systems earlier, or build on the reporting that we receive from the data, whereas a third party system is not as integrated.” For companies running mixed fleets, he says APIs are available which allow the integration of data from differing systems.

CASE SiteWatch (learn more, 10982877) is a telematics solution which monitors machine utilization and security to help equipment owners make smarter business decisions based on actual equipment data. SiteWatch tracks engine hours, maintenance intervals and equipment health; all information is collected automatically in one centralized location so owners do not have to rely on machine logs or reports from the job site in order to collect operational data.

Stemper explains that SiteWatch provides real-time data to a user web portal that can be accessed from anywhere—home, office or mobile device. Customers and dealers are able to review and analyze up to 18 months worth of data, as well as download and store information. With all of the information SiteWatch collects, customers and dealers can better prepare for maintenance by scheduling a machine’s downtime and ensuring the necessary spare parts are on hand.

“We’ve really just started to scratch the surface on the capabilities,” says Stemper. “Data will continue to play a more important role in how companies do their jobs.”

Case CE is in the process of introducing a new app which will optimize SiteWatch for mobile use. He says optimizing the way information is delivered to customers will be the next big push for the industry, along with finding new ways to gauge and assess machine and operator performance. In addition, there will be an effort to learn more about how machines operate and use that information for R&D to improve equipment design and function.

“The possibilities are endless,” he says. “In the end, telematics provides a greater opportunity for machine integration and knowledge of operation. Telematics is really the launching point of so much more for machine utilization and application. It paves the way for machine upgrades such as digital connectivity to the equipment for system upgrades, machine control plan uploads, wireless troubleshooting, and systems customization for performance maximization.”