The latest Topcon geospatial technologies are being used to create a 3D map of the Sogi hydroelectric plant in Japan as part of the CyArk 500 Challenge to digitally preserve global heritage sites. 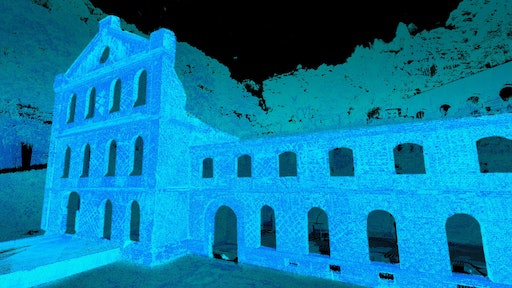 The Sogi hydroelectric plant, considered a significant contribution to the Meiji Industrial revolution, has been mapped as part of the CyArk 500 Challenge, an international project to digitally preserve and create awareness of some of the world’s most significant cultural heritage sites. The Sogi site has been recorded in 3D by an international team using the latest in geospatial technologies from Topcon, the Japanese-based manufacturer of geopositioning solutions. The Sogi plant is the second Japanese site to join the CyArk archive, a free, 3-D online library of cultural heritage sites that includes the statues of Easter Island, Pompeii, ancient Thebes and
Mount Rushmore.

Located in Isa, Kagoshima Prefecture where industrialization began in 1852, the Sogi power plant was constructed in 1909. Sogi is exemplary of Meiji brickwork architecture and was originally constructed to support the Ushio gold mines. At its height the hydroelectric plant generated 6,700 kW of power. The Sogi plant closed in 1965 with the construction of the larger Tsuruda dam downriver. The new dam has caused Sogi to flood seasonally, endangering this unique representation from the Meiji industrial revolution.

The National Congress of Industrial Heritage, in collaboration with the Japanese government nominated the Sogi plant to the CyArk 500 Challenge in December of 2014. Responding to the unique opportunity presented by Sogi, the US-based nonprofit, CyArk joined forces with technology company Topcon and the National Congress to develop a three-dimensional map of the site for future preservation and visualization. Sogi created a perfect opportunity to digitally document the regularly inaccessible site using the latest in 3D capture technologies. Topcon provided support for the project to utilize a diverse mix of technologies including laser scanning and photographic aerial drones. The resulting data will be archived by CyArk in perpetuity and disseminated online to
further promote the preservation and study of Japan’s rich industrial heritage.

“This partnership offers a wonderful opportunity to showcase an important historic resource while providing access to the kind of cutting edge technology that will help us safeguard and interpret the industrial sites critical to the history of our country,” says Koko Kato of the National Congress of Industrial Heritage.

“We are very excited for the digital preservation of the Sogi hydroelectric plant. The CyArk 500 strives to connect the international heritage community in an effort to preserve and experience incredible places in a way previously impossible. Partnerships are essential in realizing this goal and are grateful for our partnership with Kagoshima Prefecture, the National Congress of Industrial Heritage and Topcon for making this project possible,” says Ben Kacyra, CyArk Founder.

“Topcon is proud to provide our geopositioning technology and resources to the Sogi project. As a global company headquartered in Japan, we particularly understand the importance of this site and appreciate the CyArk efforts to digitally preserve it for future generations. The Sogi hydroelectric plant was a pinnacle of the industrial ingenuity of the period, and we are honored to have this opportunity to link our technology with the technology of the past,” says Eduardo Falcon, Topcon Executive VP and Geopositioning GM.