Case IH AFS RTK+ users will benefit from the reduced likelihood of signal loss with the addition of the Galileo satellite network. 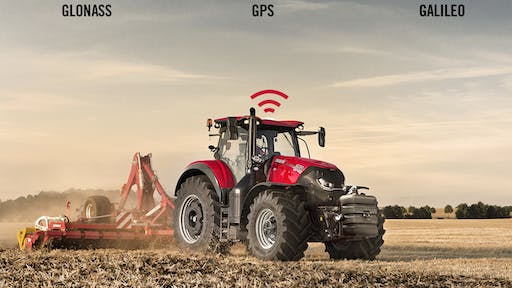 Case IH is enhancing the robustness of its RTK+ correction signal network by adding the European Galileo system to the compatible satellites with which it works, to maximize levels of signal reception and reliability for farmers using Case IH RTK+-guided auto-steering and related technologies.

The addition of Galileo to the global GNSS constellation helps minimize the risk of signal failure, a key driver for the integration of its signals into the Case IH AFS RTK+ signal system. European satellite network independence is a principal objective, but Case IH AFS RTK+ is also designed to be compatible with existing and planned GNSS satellites and inter-operable with GPS and GLONASS.

Galileo builds on the capabilities of EGNOS (European Geostationary Navigation Overlay Service), the first pan-European satellite navigation system, with improved positioning and timing information. As a result, consistency of signal coverage is enhanced, and a robust and reliable signal for accurate pass-to-pass repeatability is ensured. This benefits farmers by minimizing downtime from waiting for lost signal to be regained, and ensures consistently high efficiency of use of seed, fertilizer and crop protection products through parallel passes with minimal overlap, thereby maximizing crop potential.

“The use of GNSS technology is opening up new productivity levels and opportunities in European agriculture, providing farmers with an unprecedented level of knowledge about their crops, livestock and operations while making the sector more efficient, economically competitive and environmentally sustainable,” says Maxime Rocaboy, Product Marketing Manager AFS Technology at Case IH.

“Enhanced RTK+ accuracy through incorporation of signals from the Galileo satellite system is a core way in which we can help Case IH tractor and combine users be innovative and competitive as they seek to help develop a sustainable agriculture to feed an ever-increasing world population in an environmentally responsible way.”

During its Technology Roadshow, Topcon recently hosted a select group of experts to present highlights of new technology that allow for the smarter and faster achievement of infrastructure goals.
Topcon Positioning Systems
May 9, 2018
GPS

Trimble fourth quarter revenue was up 21%, and full-year revenue up 12%; the company expects first quarter 2018 revenue to increase between 14 and 19% on a year-over-year basis.
Trimble
February 8, 2018

The Trimble Alloy GNSS receiver has 672 channels for GNSS constellation tracking and is IP68 rated for use in harsh operating conditions.
Trimble
January 31, 2018

Exhibited at Agritechnica 2017, the Fendt 200 Vario and 200 V/F/P Vario now come pre-fitted with guidance systems - either a wayline-guided ultrasonic system, or position-guided system via GPS.
Fendt
November 22, 2017
Follow Us