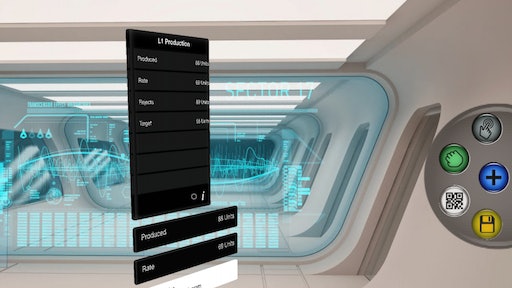 iQagent, Inc., app creator for industrial applications, announced the release of iQagent AR for IOS on the App Store. iQagent AR is the next evolution of the award-winning app iQagent, first released in 2012. This new version leverages Apple's ARKit to allow off-the-shelf creation of persistent augmented reality scenes containing process data and resources from existing plant systems. Once created, the scenes can be accessed by other devices running iQagent AR.

iQagent's patented approach (US Patent 8,358,903) uses QR codes as 'Point Of Interest' (POI) markers to identify equipment. Users create POIs for equipment and process areas and associate relevant data points and resources. A customer describes the new version as a "unique hybrid of marker based and marker-less systems," because it uses QR codes to both identify equipment and serve as a physical origin point for the scene.

"Our focus has always been to increase productivity and reduce downtime," explains iQagent CEO Bob Meads. "iQagent AR extends the vision we had in 2012; our customers can now create AR scenes with live process data, documents and videos in context of the production space without programming. For example, automation data associated with speed might be placed near that sensor on the actual equipment, along with schematics and a video on how to calibrate the sensor." Meads further explained that current customers can use iQagent AR after a simple software update.

Meads foresees augmented reality apps such as iQagent AR having a dramatic impact on future business for manufacturing hardware vendors. "Data and resources integrated into real-world contexts is a key AR benefit with wide implications for industrial hardware vendors," Meads remarks. "If apps can augment the real world with data and resources, then why would customers continue to purchase fixed displays to access this same information? OEMs may soon forgo expensive 2-d displays on machines and opt for AR viewed on end user devices. They will have to embrace how AR will change the industrial landscape, or be left behind."

AEM's new I Make America smartphone game aims to educate users about manufacturing issues and their relation to the 2016 election.
April 19, 2016