Plastic works in the off-highway industry, and educating customers about the material’s potential has become partof the business. 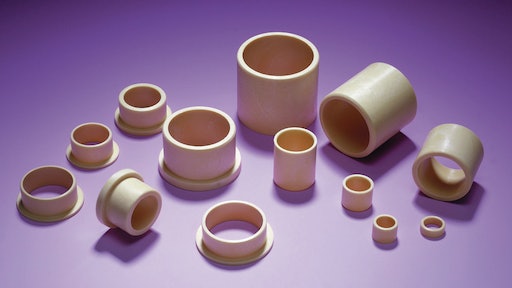 These days, young students often lament that there is nothing new to discover or that everything worthwhile has already been created. Ironically, this pessimistic view is itself not a modern-day phenomenon. Under its “Automobile” listing, a general encyclopedia published in the 1920s authoritatively reported that the horseless carriage had reached its technological peak. There’s no doubt that the 1921 Ford Model T had some pretty amazing features compared to the Quadricycle Henry Ford first used to tour Detroit’s streets a quarter-century before. But it would be difficult to successfully argue that the 2006 Ford Five Hundred is little more than a Model T with a 12-volt electrical system. Students are encouraged to think outside of the box to find new solutions to age-old problems, to combine high-tech materials to create one of those “why didn’t I think of that?” ideas. The off-highway vehicle materials list has traditionally been dominated by steel. In the last couple of decades new materials have made some remarkable things possible. Meet Tom Lykken’s new idea: The SnoBear is a land-based machine that is essentially a winter fishing boat. Those who live in the regions of North America where ice covers that favorite fishing spot for several long, cold months will understand its significance immediately.

As an off-highway vehicle, the SnoBear sits alone in a new class of vehicles. It demonstrates characteristics of a car, snowmobile, ice-fishing shanty and boat.

Some of the first dealers to sign on are situated in Canada and along the United States’ northern border. They sell boats during the seasons when there isn’t two feet of ice on the lakes — they are not the RV dealers one might guess. This year you would have been introduced to SnoBear Ind.’s unique vehicles while attending trade shows in the Upper Midwest that cater to resort owners and fish and game enthusiasts — not the snowmobile and power sports events the SnoBear’s configuration suggests.

Powered by a three-cylinder, water-cooled Briggs & Stratton/Daihatsu gasoline engine, the 2,800 lb. SnoBear can carry three ice-fishermen at speeds of up to 24 mph. They’ll travel deep into the winter landscape thanks in part to its automobile-like controls and its 220 in.-long tracks that permit a low ground pressure of 1 psi. SnoBear’s patented MaxTrax technology maximizes the capability of the custom-made Camoplast tracks by optimizing floatation and traction.

Once at the right spot on the frozen lake, the SnoBear’s patented Accralift system hydraulically lowers the cabin to the ice surface. Inside, six fishing holes located along the sidewalls provide access to holes cut into the ice. The SnoBear becomes a self-contained fishing shelter — where, inside, a thermostatically controlled propane furnace and the owner’s microwave or DVD player works to keep winter’s sub-zero temperatures outside where they belong.

There had to be a better way

The SnoBear fish house is what happens when an avid ice-fisherman and an experienced off-highway equipment engineer decides there must be a better way. About five years ago Tom Lykken, then an engineer with Case IH’s Steiger works in Fargo, ND, accidently broke an axle on his truck while out on the ice. The truck was out of commission, and — more tragically — a good weekend of fishing was shot.

“He went home and started tinkering in his garage,” says Rick Saar, sales manager, SnoBear Ind. Using a 7x11.5 ft. ice fishing shanty as inspiration, Lykken put 4,000 hours into the design and build of the first prototype. The vehicle that would become the SnoBear cruised out onto its first lake four years ago.

“Tom himself is a fisherman, and he laid the machine out to work right for him,” says Saar. “We didn’t just look for a market we could sell something into and develop something to fill it.” What happened next is a fairly common tale in “Off-Highway Heroes” stories: neighbors, friends and strangers wanted one, too.

Lykken was surprised at how the public reacted when he drove out on the lake to do some fishing. Search and rescue teams liked it, too. The fact that the machine could lower itself made it easier to load injured skiers, but they didn’t really need ice-fishing holes. A market was developing for Lykken’s self-propelled fish house.

Two years ago Greg Hatten joined Lykken to look into the business side of things and research the market for the fish house and winter ambulance versions. Rick Saar joined shortly after to help promote the snow machines to dealers and customers. Lykken worked to develop and prove the chassis for the SnoBear fish house and the people and cargo hauling version, dubbed SnoFox.

The completed bodies for the SnoBear and the SnoFox were first mated to a pair of heavily-tested chassis in April of this year. By that time of the year even North Dakota’s lake ice has returned to a liquid state, so the SnoBear team went in search of snow for publicity shots and test-driving. They found it high in the Colorado mountains.

The production machines share many of the same features and dimensions as Lykken’s prototype, although the body of the first machine was crafted from aluminum.

Drawing on his years of experience, Lykken was lead designer for the vehicles, developing the SnoFox and SnoBear as well as their assembly line and many of the necessary tools. For the more specialized features, the expertise of various suppliers was also depended on.

“Part of the vehicle’s design criteria that we’d been working with all along was that the vehicle needed to float,” says Hatten, CFO, SnoBear. We were looking for a solution in composites, but we weren’t experts with that technology.”

By working with Advanced Closed Molding (ACM) of Grand Forks, ND, the SnoBear and SnoFox were given composite bodies comprised of 2 in. foam sandwiched between fiberglass. Each side of the cabin area is molded as one piece and then assembled with a composite floor at SnoBear’s West Fargo, ND, plant.

“Getting the body perfected with the process has been very complicated,” says Hatten, “and we’ve learned quite a bit about it during the pre-production stage. We’ve leaned on ACM quite a bit, and still do, but we’ve got a product that has the attributes we required.”

The result is not only a strong body — three men have stood on the roof — that insulates the interior from noise and temperature extremes, but a machine that floats, as well.

“This feature is for safety flotation only,” warns Hatten. “We are not going to put an outboard on a SnoBear for the summer. If the SnoBear goes through the ice, you are going to get wet, and you’ll have to leave through the roof-top escape hatch. It is still a very dangerous situation. But the vehicle will stay afloat so it will not take you down with it.”

Using plastic components wherever possible also helped save on the vehicle’s overall weight, making it easier to trailer and ensuring a light footprint. Interior components such as the seats and dashboard were rotomolded by Custom Roto-Mold (CRM) of Benson, MN.

Saar is proud of the quality of each machine, and is thrilled to be representing the company out on the road. “We are a smaller company with the engineer being the designer and running the assembly line — they are still his machines. Quality is very important to him.” Local suppliers are used whenever possible, with high-quality work rather than price being a determining factor. “We are answering to the product first.”

Getting the word out

As the sole employee focused on selling units and identifying dealers, Saar figures he’ll travel around 60,000 miles this year between visiting potential dealers, end-users and shows. Saar has learned to always figure in an extra half-hour between appointments because he’s often stopped by people who want to know more about his trailer’s unique cargo.

One dealer in Canada is ready to take SnoBear’s entire first year of production. Hatten wants to spread the machines around as much as possible.

“Early on we travelled through the Northeastern states and eastern Canada and got a lot of contacts. But the order potential in our area is higher than we anticipated,” says Hatten. “We couldn’t send them to the East Coast even if we wanted to. We drew a circle that encompasses Minnesota and Manitoba, and that’s the market we can fill this year.”

As production ramps up (the first machines left the assembly line in late October) Hatten plans to draw a circle with a wider radius.

SnoBear Suppliers
Help is around the corner

To propel his self-propelled ice-fishing house concept to market, Tom Lykken, president and CEO, SnoBear Ind., West Fargo, ND, has sought high-quality, local suppliers whenever possible. Below are some of the suppliers that have helped to make the SnoBear and SnoFox vehicles a reality.

To pull everything together, Lykken used SolidWorks mechanical design software. Some of the work in which SolidWorks was used includes: Machining the tooling for the composite body, rotationally molded components, and stamped parts directly from SolidWorks CAD data. All weld fixtures and assembly line tools were designed in-house using SolidWorks models. All linkage systems were designed utilizing SolidWorks 2D sketch and 3D modeling capability. SolidWorks was also used by Young Mfg. as an in-house manufacturing interface system.

Metalformers expect a rise in incoming orders in the next 3 months, with 50% of respondents to PMA's January Business Conditions Report forecasting an increase in orders.
Precision Metalforming Association (PMA)
February 11, 2021

The company is providing its manufacturing expertise to help with the acceleration of battery-electric commercial vehicles.
Sara Jensen
February 2, 2021

The funding will stimulate technology innovation and improve the energy productivity of American manufacturing.
Bryce Gill
January 26, 2021
Follow Us