Heat treating options. "It would probably be hard to find a significant piece of off-highway equipment that doesn’t have austempered ductile iron in it", says John Keough, CEO of Applied Process, provider of austempering heat treatment based in Livonia, MI. 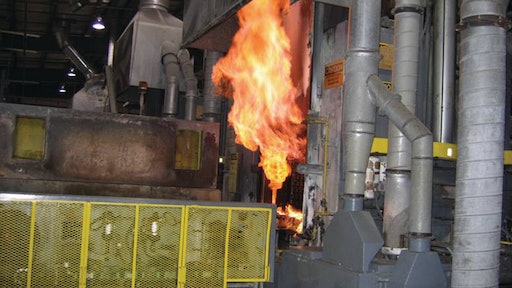 "It would probably be hard to find a significant piece of off-highway equipment that doesn’t have austempered ductile iron in it", says John Keough, CEO of Applied Process, provider of austempering heat treatment based in Livonia, MI.

A strong statement. One that may beg the question in many minds of “What exactly is austempered ductile iron?” That’s a question that Keough and his colleagues at Applied Process have been on a mission to answer since the heat treater began offering austempering (ADI) as an option in 1984.

The first step in austempering does not differ from many conventional heat treating processes in that the cast piece is heated up to red hot or austenitized. For conventional processes like quench and temper, the pieces are subsequently quenched into a water or oil bath that is generally kept at room temperature. This heating and quenching sequence produces a crystalline structure in the iron called martensite, a hard but brittle material.

The difference with austempering is in the quenching medium. Instead of oil or water, the piece is “cooled” in a molten nitrite/nitrate salt solution that is kept between 230 C and 400 C depending upon the grade of ADI desired. It never reaches the martensite start (Ms) temperature, and therefore the brittle martensite microstructure never develops. Instead, a material called ausferrite is formed.

In conventional heat treating, when the part reaches the Ms temperature, the microstructure transformation is instantaneous. The surface of the component may cool and harden, but the inside could still be red hot. As a result, the component will not transform uniformly which can cause distortion and small cracks in the part, reducing its overall strength.

With austempering, the ausferrite forms over period of many minutes or hours so the part is uniformly transformed. The resulting material is stronger and tougher than conventionally heat treated ductile iron.

“ADI gives us a much higher toughness for a given hardness,” says Keough. “If we quenched and tempered ductile iron to a certain hardness and pulled a tensile bar from it, we might get 2% elongation. If we austempered a bar out of the same ductile iron, it might get 12% elongation. It’s a much tougher structure — not brittle like quench and tempered iron tends to be.”

ADI provides the design engineer with a new group of cast ferrous materials which offer the combination of mechanical properties equivalent to cast and forged steels and production costs similar to those of conventional ductile iron. Here are some of the major benefits:

Strength-to-weight ratio. ADI has an excellent strength-to-weight ratio. In the off-highway and heavy-duty industry, it is often used as a replacement material for more costly aluminum castings or forgings. ADI is three times stronger than cast or forged aluminum yet weighs only two and a half times as much. Because it is so much stronger, a properly designed ADI part can replace aluminum at a weight savings because a lesser amount of material is needed. “So in theory, if you can make the ADI part thin enough, you can replace more costly aluminum parts,” says Keough.

For a given shape, an ADI component is 10% lighter than steel because of the presence of graphite in ductile cast iron. Thus, weight savings may also be realized when ADI is used in place of steel weldments or forgings.

Abrasion resistance. Generally, ADI will out wear competitive materials at a given hardness level. For example, an ADI component at 30 to 40 Rc will wear comparably to a quenched and tempered steel component at nearly 60 Rc in an abrasive wear environment. Different property combinations for ADI can be produced by varying the quench temperature. For instance, when a combination of high toughness and abrasion resistance is needed, an austempering temperature in the range of 350 C to 375 C should be used. When a combination of high strength and abrasion resistance are required, an austempering temperature of 260 C will yield the best results.

Machinability. When the substantial increases in strength and wear resistance offered by ADI are considered, it would be logical to assume that ADI could present machining problems. But the opposite it is true. The reasons for this are two fold: First, the machinability of the softer grades of ADI is equal to or superior to that of steels with equivalent strength. Second, the predictable growth characteristics of ADI during austempering allow, in many cases, for it to be machined complete in the soft as-cast or annealed state before heat treatment. This allows for faster machine feeds and speeds and increases tool life. Furthermore, both ductile iron and ADI produce dense, discontinuous chips that are easily handled.

Yield rate. Ductile iron is readily cast into complex shapes so it has a very high yield rate, i.e. the proportion of metal poured vs. metal shipped.

The first commercially produced ADI part was a small crankshaft for a hermetically sealed refrigerator compressor. It was cast by Wagner Castings Co. for Tecumseh Products in 1972. Up until that point, austempering was essentially a laboratory process and remained relatively small scale until advances were made in furnace and processing technology to allow for higher volume production.

In North America, ADI achieved a major breakthrough in 1977, when General Motors converted a forged and case hardened steel ring gear and pinion to ADI for Pontiac rear-drive automobiles. The decision came after nine years of development work and six years of field testing. The automaker was able to gain both significant cost savings and product improvement by changing to ADI.

In 1983, the Cummins Engine Co. began using ADI timing gears, produced to AGMA class 8 standards, in its B and C series diesel engines. These gears were machined and hobbed from annealed ductile iron castings. Annual production of these gears exceeds 30,000 sets and the cost savings are estimated at 30% compared to the forged and carburized 1022 steel gears previously used.

But there are many other potential applications. As it now stands, the only thing limiting the size of an austempered part is the size of the furnace itself. Applied Process has furnaces that can handle parts up to 72 x 36 x 54 in. while its licensee in England can accommodate pieces that measure 72 x 72 x 54 in.

There are many heat treaters in the North America that offer austempering as an option. What is unique about Keough and his crew at Applied Process is that they specialize in helping design engineers convert from other materials to ADI.

“About 95% of the work we do is a conversion, where we’ve replaced one material process combination with one that helps our customer produce a lower cost product,” says Keough.

In the off-highway industry, Keough says he encounters many mechanical engineers who are well versed in the mechanical workings of the machines they are designing, but beyond steel and aluminum, machining and forging, don’t know much about how materials and processes can help improve either the strength, weight, or wear characteristics of the component.

So often this conversion process begins with a discussion on the benefits of replacing a six piece welded fabrication with a cast piece. And from there, the discussion moves to which materials would be suitable: steel, aluminum, bronze, etc. And it is Keough’s hope that more and more often the answer to that question is ADI.

Portions of this article are from the paper entitled “Austempered Ductile Iron” by J.K. Keough, August 1998.