The Growing Potential of 3D Printing

A project to 3D print an excavator is the first large-scale use of steel for such a process, demonstrating the rapid growth of this manufacturing technology’s capabilities. 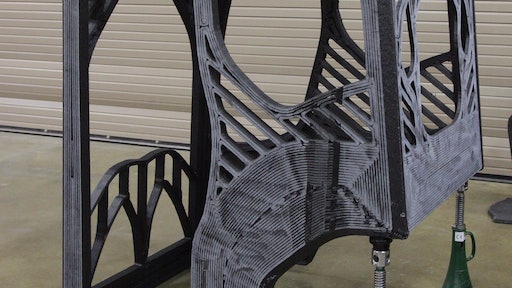 At this year’s CONEXPO-CON/AGG and IFPE show, a fully functional 3D printed excavator was on display. In addition to the printed machine, a second excavator was printed on site; both were displayed in the show’s new Tech Experience area.

Known as Project AME (advanced manufacturing excavator), the 3D printed excavator was a 2-year project initiated by the Center for Compact and Efficient Fluid Power (CCEFP) to demonstrate the potential use of 3D printing (aka additive manufacturing) within the fluid power and mobile equipment industries. In particular, the project aimed to show the feasibility of printing with metal alloys and comprised the first large-scale use of steel in 3D printing.

CCEFP received a grant from the National Science Foundation (NSF) for the project. It was also supported by the Association of Equipment Manufacturers (AEM) and National Fluid Power Association (NFPA).

The 3D printed portions of the excavator were the operator cab, the stick (distal end of the boom) and the heat exchanger. Mike Gust, Industrial Liaison Officer at the CCEFP, says only three portions of the machine were chosen because of the available time and resources necessary to complete the design and printing of the excavator. However, he says it gets the main point across which is to make the industry aware that additive manufacturing is quickly becoming more prevalent and to have engineers “think out of the box in the future if they are involved in designing next generation equipment.”

Engineering student research teams from Georgia Tech and the University of Minnesota worked on the excavator design to make it conducive to 3D printing, as well as to decrease size, weight, materials cost, and maintenance while increasing machine efficiency. The excavator’s boom, cab and heat exchanger were designed as part of three separate student design projects.

When developing the project, Gust says the 3D printing processes themselves were chosen first, then the materials for the three parts. Carbon fiber composites were chosen as the material for the cab due in part to the fact that its design would be part of an undergraduate design contest and CCEFP wanted to choose a material for which the process was already proven. “The steel process for the boom was nowhere near ready and required significant development by ORNL. This would have been too difficult and time consuming for undergraduate students who are taking other coursework at the same time,” he explains.

In addition, he says carbon fiber composites were chosen because “we wanted to demonstrate ‘conventional BAAM (Big Area Additive Manufacturing)’ on a lower stressed component and carbon fiber reinforced composite was what was currently available.” (See sidebar below to learn more about BAAM.)

Lonnie Love, Corporate Fellow at ORNL, says the BAAM was the best 3D printer to use for the cab because of the chosen material, as well as its size, detail and geometry requirements. The goal for the cab was to have the ability to create big, flat panels with organic shapes, which the BAAM printer allowed.

Additionally, he says the cab uses a new coating developed by Polynt for BAAM and applied by TruDesign.

Love says one of the exciting things about Project AME is the different processes and capabilities it demonstrates. “Not all 3D printers are the same,” he says. “Each has their strengths and their weaknesses.”

The project demonstrates three of the seven types of 3D printing processes available. Each printer type has a range of things it can do. “For us that’s a very important thing to educate the construction industry about,” Love says. “You don’t want to just go out and buy a machine, you really want to think through what your objective is, and we can help you figure out what’s the right type of system for your applications.”

Graduate students from Georgia Tech took on design of the steel boom. By using 3D printing, the fluid passages of the boom’s hydraulic system can be printed inside the boom structure, eliminating some of the hoses and tubing that would be included in a traditional machine. This helps reduce weight and material costs as material is printed only where it’s needed. While some casting processes could come close to recreating this type of design, Gust says “the tooling and production costs are quite prohibitive unless the volumes are high.”

Love notes that at the time of Project AME’s inception, there was no large-scale 3D printer that could print steel. Because of this, ORNL spent the next 2 years developing a system to meet this need. The lab worked with Wolf Robotics who will be offering the printers on a commercial basis. “When developing a new technology, ORNL tries to work directly with a machine tool manufacturer (such as Wolf Robotics and Cincinnati Inc.) so that by the end of a project, a [manufacturer] can actually go out and purchase one if they want it,” says Love.

One of the challenges associated with printing metal components is their tendency to warp. “Whenever you are melting metal it expands, and when it cools it contracts,” explains Love. “As you do this, you’re building up a lot of stress in the parts and they will want to distort and curl.”

Love says the team found early on that printing the 7 ft. (2.1 m) long stick vertically instead of horizontally would help overcome this issue. Despite the stick’s height, he says the area being grown—a cross section of the stick—is short which helps to manage the stress. Additionally, the temperatures at the interface between each layer are in the desired range to keep warping to a minimum. Love says temperature is a large factor when it comes to 3D printing metals, and as such the controls of the printer were modified to measure and compensate for warping by adjusting the temperature and speeds when necessary as the part was grown.

Aluminum was the chosen material for the heat exchanger due to its excellent heat transfer properties, says Gust. Students at the University of Minnesota were responsible for designing it. The heat exchanger stores and cools oil in a single unit to reduce the size and weight of components used within the excavator, which also helps improve overall machine efficiency.

ORNL’s Lonnie Love (third from left) with the winning student engineering team from the University of Illinois at Urbana-Champaign who got the opportunity to see its design being printed on the Big Area Additive Manufacturing system at ORNL.Oak Ridge National Laboratory/U.S. Dept. of Energy

For the excavator cab, a design contest was held for undergraduate engineering students across the U.S. Teams were challenged with designing and printing a futuristic cab and human machine interface (HMI) that was both aesthetically pleasing and functional. A panel of industry experts judged and chose the winner, a team from the University of Illinois at Urbana-Champaign (UIUC). The winning team received a $2,000 cash prize donated by the NFPA and a trip to ORNL to see its design printed.

“Additive manufacturing will revolutionize the way things are designed and produced in the not-so-distant future,” Gust said in a press release announcing the winner of the cab design contest. “This contest helped to raise awareness of advancements in technology to the next generation of engineers and we’re excited that future engineers are bringing this newly designed machine to life.”

The BAAM (Big Area Additive Manufacturing Machine) is a 3D printer which can manufacture strong, lightweight composite parts without the need for tooling. It was co-developed by Oak Ridge National Laboratory (ORNL) and Cincinnati Inc.

ORNL has partnered with Cincinnati Inc. to commercialize the BAAM technology.

Watch a video of the student-designed cab being 3D printed at Oak Ridge National Laboratory (ORNL).

What You Need to Know About Getting Your Organization AM-Ready

Three Things to Know Regarding 3D Printing of Construction Equipment