The International Federation of Robotics have released a new report indicating use of industrial robots continues to increase in the United States and United Kingdom. 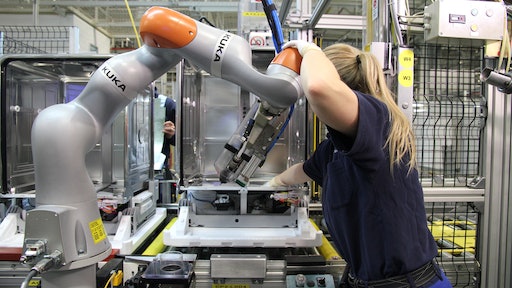 While the U.K. has a record number of industrial robots, they are behind other European countries.
KUKA

The new World Robotics 2020 Industrial Robots report presented by the International Federation of Robotics (IFR) shows both the U.S. and the United Kingdom currently have a record number of robots in their factors.

Industrial robots operating in factories of the United Kingdom are at about 21,700, an increase of 5%. Sales of new robots have slowed in recent years, however, with 2,000 units shipped in 2019 which was 16% less compared to 2018.

“The United Kingdom has a surprisingly low robot stock for a Western European country in the manufacturing industry,” says Milton Guerry, President of the International Federation of Robotics. “Though the U.K.'s operational stock hits a new record, other European countries like France, Italy and Germany have between two times and even 10 times the stock in operation. The automotive and the general industry need to invest in automation technology to keep up with international competition.”

In the United States, the report shows there are about 293,000 industrial robots currently operating in factories, an increase of 7%. Sales of new robots have remained on a high level with 33,300 units shipped in 2019. This is 17% less compared to 2018, but still the second highest sales volume ever recorded.

“The United States are by far the biggest robot market in the Americas,” says Guerry. “The annual number of robots sold is highly influenced by the automotive industry, which is the most important customer. In 2019, the U.S. car market was again the second largest car market in the world, following China, with the second largest production volume of cars and light vehicles.”

The North American countries—the United States, Canada, and Mexico—represent the second largest operational stock of industrial robots in the world after China. Following the U.S. with 293,000 units in 2019, Mexico's operational stock comes second with about 40,000 units, which is a plus of 11% and Canada, ranking third, with about 29,000 units at plus 2%. Most of the robots in the U.S. are imported from Japan, Korea, and Europe. Although there are not many North American robot manufacturers, there are numerous important robot system integrators.

Even without the coronavirus, investments in the U.K. were already dampened because of the currently unclear Brexit situation. If no trade agreement is found until December 31, 2020, the U.K. will be treated like a third-party country of the EU. This uncertainty inhibits the necessary modernization of manufacturing production facilities. It will also determine the speed of economic recovery after the pandemic. Brexit might, however, drive robot installations in the U.K. because immigrants from Eastern Europe are starting to return to their home countries and government policy is to restrict immigration. These immigrants often worked in low-wage jobs, particularly in the food industry as well as in other manufacturing jobs, and might not be easily replaced by human labor in times of low unemployment. Again, short-run figures will be impacted by the COVID-19 situation, which will likely see rising unemployment. When the economy recovers and labor becomes a scarce resource again, the demand for robots might start to rise.

Globally, COVID-19 has had a strong impact on 2020—but also offers a chance for modernization and digitalization of production on the way to recovery. In the long run, the benefits of increasing robot installations remain the same: Rapid production and delivery of customized products at competitive prices are the main incentives. Automation enables manufacturers to keep production in developed economies—or reshore it—without sacrificing cost efficiency. The range of industrial robots continues to expand, from traditional caged robots capable of handling all payloads quickly and precisely to new collaborative robots that work safely alongside humans, fully integrated into workbenches.

Technology Drives Industries’ Growth and Recovery During and Post-Pandemic