FPT's factory in Turin is utilizing collaborative industrial robots capable of working alongside humans to help them and perform the most tiring and repetitive tasks. 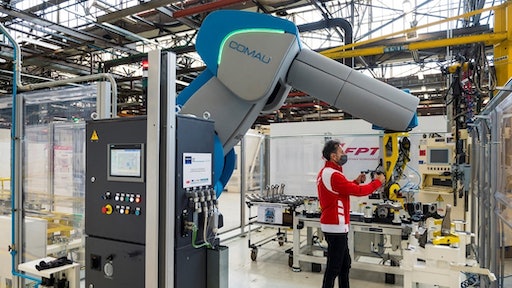 What will the factory of the future be like? How will it be organized? To answer these and many other questions about the Industry 4.0 production model, all it takes is a trip to the FPT Industrial Driveline plant in Turin, dedicated to the production of transmissions and axles for heavy equipment.

Here, in the department dedicated to assembling spindles for heavy equipment axles, AURA (Advanced Use Robotic Arm) operates: this is a robot designed and built by Comau and used in the HuManS (Human-centered Manufacturing System) project, launched in the area of the Piedmont Region tender dedicated to the Intelligent Factory Platform and with which FPT Industrial, Comau and another 17 companies specialized in the sector participated. It is a project that places humans at the center of the production system, surrounded by machinery that helps and shares the space with them in complete safety.

Almost 3 m high and weighing about 3 tons, AURA is a collaborative industrial robot capable of working alongside humans, without barriers and in the same work station, to help them and perform the most tiring and repetitive tasks and, where necessary, it is ready to be manually guided by the human operator. Specifically, AURA retrieves a part from the supply cart in complete autonomy and delicately hands it to the operator it shares the station with. And it is precisely the human operator who, at this point, takes control of the operations, guiding the robot using a specific handle so that the mechanical arm takes the part to the work bench, where it is coupled with a lever.

Perfect collaboration and synergy, where each of the subjects involved is able to perform at their best. The robot performs the heavy work methodically and effortlessly, the only collaborative machine on the market capable of lifting up to 170 kg, whereas the delicate assembly stage is controlled by a human, thereby using human skills to adapt to operational situations and assembly strategies that vary from model to model, sometimes greatly.

But strength is not the only feature that makes AURA a robot without rivals. In fact, in its role as a collaborative machine, it must be able to perceive a presence, whether it be other machinery or a real person, in the space where it operates and consequently modulate its behavior. And, in order to do this in the best possible way, it uses its “senses.”

A “sensitive skin” - soft and inspired by human skin - that allows it to decide whether to reduce its speed or stop entirely. A “view” in the form of a 3D camera that the robot uses to scan the piece being retrieved in order to perceive its position. And last, but not least, “the touch” it expresses through a gripper, capable of lifting the component being moved with a firm, but delicate grip. But that's not all. In order to work without any barriers alongside a human on the FPT Industrial driveline assembly line, AURA was outfitted with a true “sixth sense”: an advanced and complex laser scanning system that investigates and monitors the work space when the arm is in operation.

FPT Industrial and Comau actively participated in the HuManS project from the preliminary stages of defining the requirements and the areas of application in 2017, with the goal of improving processes and making them more efficient thanks to the implementation of new technical solutions expressly targeted at factory ergonomics. Also, as an end user, FPT Industrial and Comau consistently guaranteed effective monitoring of the actual industrial validity and the results, thereby streamlining their transition from the scientific area to the application area.

“We are happy to have moved this project forward with an excellent partner like Comau,” says Giuseppe Daresta, Manufacturing Manager for FTP Industrial. “The configuration created at the Turin Driveline plant represents significant innovation, as it improves the ergonomics in manual assembly operations of heavy elements thanks to the support of robots capable of safely sharing the spaces with the human operator. It also represents an important vehicle to spread new technologies developed thanks to their application in a real production setting.”

“The synergy between two leading companies in the technological field such as FPT Industrial and Comau has led to an innovative solution focused on the collaborative AURA robot. Comau has always been involved in developing products and systems aimed at improving customer production processes in terms of flexibility, quality and efficiency,” comments Pietro Ottavis, Chief Technology Officer for Comau. “‘Cobots’ and digital instruments are just some of the main technologies that Comau has developed following its own approach to Industry 4.0, called HUMANufacturing, to create complete and safe collaboration in production operations between humans and machines, called on to support humans in operations that require greater speed, strength and repeatability, as well as dangerous operations.”