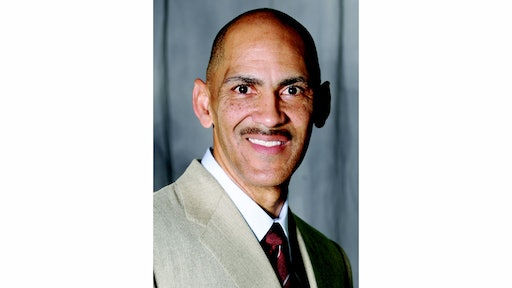 Former NFL head coach Tony Dungy, whose teams averaged more wins in the regular season than those of any other head coach in League history, will serve as keynote speaker at The Work Truck Show 2015. His motivational address will be part of the President’s Breakfast & NTEA Annual Meeting on Thursday, March 5.

The Work Truck Show, North America’s largest work truck event, is produced annually by NTEA – The Association for the Work Truck Industry. The 2015 event will be held March 4 to 6 at the Indiana Convention Center in Indianapolis, IN, the same city where Dungy compiled an 85-27 record in seven seasons as head coach of the Indianapolis Colts. Educational programming, including the Green Truck Summit, begins March 3.

Dungy retired in 2009 after spending 31 years in the NFL as a player and coach. He won his first Super Bowl ring as a member of the 1978 Pittsburgh Steelers and went on to become, at the time, the youngest assistant coach in league history at 25 years old and then the youngest coordinator at 28.

As head coach of the Tampa Bay Buccaneers and Colts, Dungy reached the postseason an unprecedented 10 straight times. When the Colts defeated the Chicago Bears in Super Bowl XLI in 2007, Dungy became the first African-American head coach to lead his team to an NFL championship and only the third person to win it as both a player and head coach.

After Dungy retired from coaching, he joined NBC’s “Football Night in America” as an analyst and was nominated for an Emmy in his first season. He currently devotes time to a wide variety of organizations, including Abe Brown Ministries, the Fellowship of Christian Athletes, the Dungy Family Foundation, Big Brothers Big Sisters, Boys & Girls Clubs and All Pro Dad.

Dungy is known for a leadership style that emphasizes decency and respect. He has written about these values in several books, including the bestselling “Quiet Strength: The Principles, Practices, and Priorities of a Winning Life” (2008); “Uncommon: Finding Your Path to Significance” (2011); and “The Mentor Leader” (2011). He also authored the bestselling children’s book “You Can Do It!” (2008) and released “Uncommon Marriage: Learning about Lasting Love and Overcoming Life’s Obstacles Together” this year with his wife, Lauren.

“Tony Dungy has built an incredibly successful career on integrity,” says Jeffrey Messer, NTEA 2015 Convention Chairman and President of Messer Truck Equipment (Westbrook, ME). “I cannot think of a better place than Indianapolis, where he reached the pinnacle of his profession, for Work Truck Show attendees to learn from his extensive leadership experience.”

Each year, The Work Truck Show brings together more than 10,000 truck fleet managers, manufacturers, distributors, dealers, equipment buyers and maintenance personnel. It features more than 500,000 square feet of the newest vocational trucks, vans and equipment, ride-and-drives, and opportunities to connect with other work truck industry professionals.

Registration for The Work Truck Show 2015 opens in October.