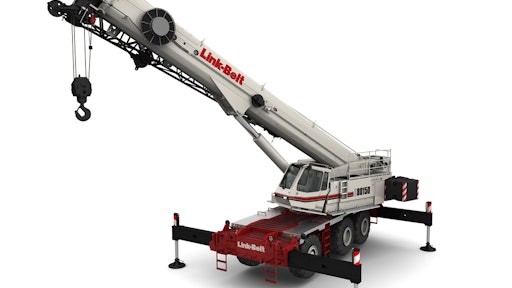 In 2002, Link-Belt introduced the world to hydrostatic drive on a six-wheel carrier frame with the RTC-80100 Series II. Twelve years later, Link-Belt is adding reach and capacity to its rough terrain crane line with the new 150 ton (135 mt) RTC-80150 Series II. Powered by a 345 hp Cummins Tier 4 Final diesel engine, the RTC-80150 Series II was debuted for the first time at CONEXPO 2014 March 4-8, in Las Vegas, Nevada.

“The long reach is a tremendous benefit and we’re confident that the market is going to embrace this new model. Our timing couldn’t be any better based upon the strong activity in the large RT market,” says Link-Belt’s Rough Terrain Product Manager, Brian Smoot.

Visitors to CONEXPO could see the 22 ft., tight turning radius of the RTC-80150 Series II which is best in its class. A switch in the cab controls four steering modes: independent front, independent rear, combination and diagonal. In addition to a tight turning radius variable speed pumps supply hydraulic power to all six drive motors for outstanding creep control.

Boom
The RTC-80150 Series II comes with a 42.3 to 195.3 ft. (12.9 to 59.5 m) six-section, full-power latching boom with superior load capability and five boom extend modes that are simple but effective. To make maintenance easier, the design incorporates Link-Belt’s standard Teflon wear pucks impregnated in the wear pad surfaces so the boom requires no grease.

For high-angle lifts, the RTC-80150 Series II operator’s cab can tilt up to 20 degrees. A swing-up roof window with windshield wiper and washer, engine-dependent warm water cab heating, a sun screen, and a five-way-adjustable seat with headrest ensure a comfortable work environment.

The operator’s cab features a large viewing window that minimizes blind spots and has well placed controls and readouts, including Link-Belt’s Pulse. Link-Belt Pulse is a Link-Belt designed, total crane operating system that utilizes an in-cab display as a readout and operator interface with on-board diagnostics including the rated capacity limiter, wind speed, boom length and angle, radius of load and crane configuration just to name a few.

A new camera package enhances on-board site monitoring and includes cameras located on the right side of the upper frame as well as one for the main winch and one for the auxiliary winch. Visitors to CONEXPO were also introduced to aluminum decking on the RTC-80150 Series II. In addition to the new aluminum decking, the RTC-80150 Series II has six points of access to the flat carrier deck. The front and rear lower ladders are removable to avoid damage during transport. Once on deck, routine checks on powertrain components and fluid levels are a snap with large swing-out doors that reveal the entire engine compartments and access ladders and folding upper guardrails provide reinforced safety boundaries.

With power and performance the Link-Belt RTC-8080150 Series II is a great addition to the best fleet of rough terrain cranes in North America.

Other standout features of the RTC-80150 Series II: