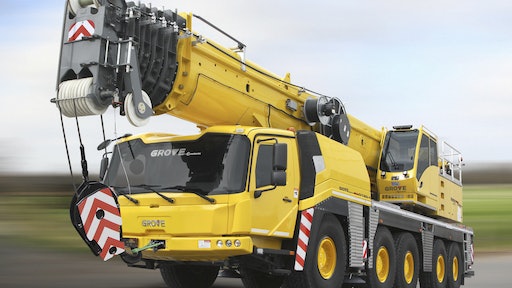 Manitowoc has introduced two new five-axle Grove all-terrain cranes to join the recently launched GMK5250L. The new GMK5180-1 and GMK5200-1 cranes share several outstanding features and advantages found on the GMK5250L, as well as an optimized counterweight package for maximum flexibility. These innovative new additions to the Grove range enable customers to select the right crane for their market, allowing them to maximize return on investment.

The new Grove cranes offer optimal boom and jib combinations, featuring a 64-meter main boom which can be extended with two 8-meter inserts and an 18-meter swing-away jib with 40 degree offset. The 180 t capacity GMK5180-1 has a maximum counterweight of 50 t, and the 200 t capacity GMK5200-1 has a maximum counterweigh of 70 t. With the optimized boom length combined with the highly competitive load charts featured on the new Groves, Manitowoc is setting new standards in the five-axle, all-terrain crane category.

“The addition of these new five-axle Grove all terrain cranes means we can offer our customers the widest choice in terms of boom length and capacity,” says Jens Ennen, Senior Vice President for All-Terrain and Truck Cranes at Manitowoc. “All-terrain cranes in this class are highly popular for rental work and well-suited for all kinds of jobs from construction, to industrial lifts and tower crane assembly. The new GMK5180-1 and GMK5200-1 cranes offer all the technical benefits of the GMK5250L, including the excellent maneuverability provided by the VIAB turbo clutch as well as the interchangeability of counterweights with the GMK6300L for better versatility.”

Together with the GMK5250L, the new Grove five-axle cranes are the first in the industry to offer a VIAB turbo retarder clutch, which eliminates both fluid overheating and clutch burning, while enabling wear-free starting and braking. It also contributes to fuel savings. And in common with new Grove launches, the GMK5180-1 and GMK5200-1 are powered by a single engine - a Tier 4 Final/EUROMOT 4 Mercedes-Benz OM471LA, a six cylinder diesel engine with a 390 kW (520 hp) rating and maximum torque of 2,460 Nm. The engine drives the carrier and powers the superstructure. Using only a single engine means lower fuel consumption during operation (up to 30% less diesel), reduced overall weight and less maintenance, meaning the crane is far more economical.

As with the Grove GMK5250L, the new GMK5180-1 and GMK5200-1 offer excellent roadability, with a variety of axle load configurations, allowing the cranes to meet the requirements of virtually any market. Special attention has been given to the appropriate axle group spacing, and in countries where the local requirement is for axle loadings of up to 16.5 t (such as the UK), the cranes are able to move on the highway with up to 21 t of counterweight.

The five-axle cranes can be moved on the job site with their full counterweight, saving valuable project time that would otherwise be spent installing or removing sections. The counterweight slabs are interchangeable with other models, and the new Groves also benefit from their use of common parts found in other Grove cranes, optimizing logistics and reducing transport costs for customers. In addition, the self-rigging auxiliary hoist introduced on the GMK5250L can be used on both new models.

On-site movements are made easier with the inclusion of Grove’s patented Megatrak independent suspension, as well as the all-wheel steer system which means no axles need to be lifted while moving – again, enabling the optimum amount of counterweight to be carried, supported by the active suspension control.

The standardized CCS is a user-friendly interface that Manitowoc is introducing on all new all-terrain crane models, as well as crawler cranes, rough-terrain cranes, truck cranes and tower cranes. The CCS components and operating software have been specifically designed, developed and tested by Manitowoc Engineering and Innovation teams worldwide to ensure the highest reliability standards. The cab also features a new ergonomic jog dial and new joysticks.

Deliveries of the new GMK5200-1 and GMK5180-1 will start from Q4 2015 and both cranes will be showcased in September at a series of events in Wilhelmshaven, Germany, where the cranes are manufactured.