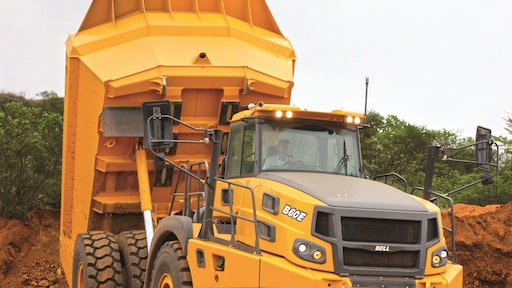 bauma 2016 marks the first time that Bell Equipment will showcase its 60-t truck outside of Africa. The prototype B60E, capable of moving large volumes of material in all weather conditions, places the South African manufacturer at the cutting edge of off-road trucking by providing a unique solution to a market segment that was previously only contested by rigid trucks.

The first generation of the Bell 60-tonner, the B60D, was introduced as a concept at the inaugural bauma Africa in 2013 and has taken Articulated Dump Truck (ADT) design and innovation into a new league. Since then it has been running successfully on various sites in Africa where it has gained popularity for its all-weather suitability.

According to Bell Equipment's Product Marketing Manager, Tristan du Pisanie, the B60D was developed after the company identified a growing need among contractors making use of rigid trucks in the 60-t range. In response, the company adopted the two-axle concept of a rigid truck but with a driven front axle and independent front and rear chassis.

He says, "By combining the ADT concept as we know it with the single rear axle, we came up with a unique machine configuration - a 4x4 with full articulation steering and oscillation joint and that gives us the ability to keep all four driving wheels on the ground and fully utilize the traction that's available. This gives our 60-t truck more off-road capability than any conventional rigid truck."

Bell Equipment's design philosophy has always been driven by creating lowest cost per tonne equipment solutions and the 60-tonner is no different. It delivers cost efficiencies related to economies of scale in addition to featuring an economical drivetrain that delivers significantly lower fuel consumption than a traditional rigid truck. This has been verified over the last 2 years of testing with a number of trucks already generating returns for customers.

The B60E will be powered by the latest generation Mercedes Benz engine optimized for off-highway use by MTU. "This means that Bell is able to extend its geographic reach and make the B60E available in regulated countries for the first time," says du Pisanie.

While the B60E has the same cab as the other models in the E-Series range, the most visible differences are at the back end. The back axle is a dedicated 70-t truck and haulage axle from Kessler, Germany in keeping with the Bell philosophy of selecting the best components and technology available on the market.

To achieve the 60-t capacity, the bin is much wider than an ADT and resembles a conventional rigid-type bin. Telescopic cylinders tuck under the bin to push it up in stages during the tipping process. Says du Pisanie, "The rear chassis and suspension are distinctly different from an ADT concept. A cradle supports the rear axle with struts being used to create shock absorption for a controlled ride."

Du Pisanie says the B60E is well suited to hard ground applications, particularly mines and quarries with tight turns. He says, "In these applications you don't need the flotation of an ADT so the single rear axle can take the full load and deliver the benefits of having one less axle, such as no scuffing of tires and improved maneuverability.

"However, the B60E's real niche is where wet weather conditions can adversely affect traction and rigid trucks would normally have to stop production when rain falls. We have had a number of test units running alongside rigid trucks on sites in Africa and in adverse weather conditions the rigid trucks had to stop operating but our B60Ds, with their all-wheel traction and retardation advantage, were able to safely continue working with no loss in production," says du Pisanie.

"Additionally, less maintenance of the ground conditions at the load and dump site, normally required to prevent rigid trucks from getting stuck, would also deliver significant savings to a customer. The fact that the machine has four wheel drive and the ability, through the incorporation of an independent front and rear chassis, to keep the wheels on the ground, is a huge advantage for just about any high production application."

In addition, the B60E has a similar look and footprint to a 60-t rigid dump truck, which means Bell trucks can be run seamlessly alongside fleets of rigid trucks to provide fleet owners greater flexibility. "Both types of trucks share the same wheel track width and have similar bin heights. The main difference is in the everyday productivity and versatility of the truck. The tighter turner circle of the B60 and the truck's ability to negotiate steeper ramps are also significant advantages over rigid trucks," says du Pisanie.